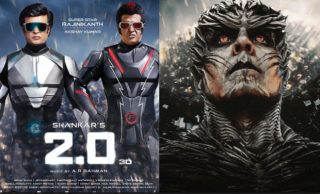 After Thugs of Hindostan’s failure, I was afraid about 2 point 0. But the movies trash all the doubts and do emerge as a big winner.

The movie starts on the familiar note, the rise of the negative force- All the cell phones in a particular city start to disappear all of a sudden- and since the Government and other human forces have no idea how to stop it, the hero must save the day, thus reboot Chitti.

The Superstar once again steals the show as Vaseegaran and Chitti. It’s like a cake walk for him. To me, The second half, especially, the pre-climax sequence is the best compared to the first half. Equal to Superstar’s performance was Akshay Kumar’s. In fact, I loved him more. The flashback sequence worked out as well.

The VFX is the real winner here. The years of hard work and Shankar’s insane imagination is a visual treat, keeps us engaging throughout. Amy Jackson and other supporting cast do lift the movie in a way or two.

If there’s something that’s missing in this movie is Sujatha’s dialogues. Shankar misses him badly. Well, who doesn’t?

On the whole, do catch the movie in 3D and believe me it’s worth it!