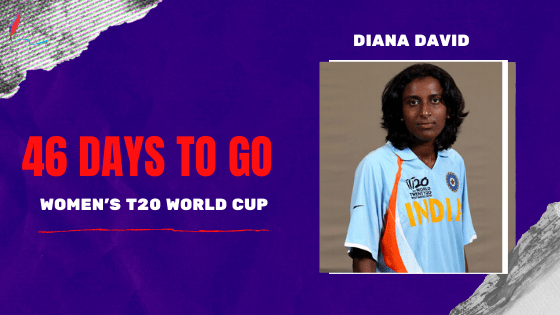 World Cup produces heroes. Some are predictable while some aren’t. A lot wasn’t expected from Diana David when she was selected into the T20 squad for the World Cup 2010. She didn’t play an international game for almost six years before getting into the ODI team against England in 2010 and then in the T20 squad for the series as well. Three wickets in two matches and she was economical as well.

Then came the biggest test of the career, The T20 World Cup which was held in West Indies. Diana David was included in the squad and it did raise a quite a few eyebrows. After coming back to the international stage literally after six years, she had a point to prove there.

She didn’t take the competition lightly as well. At the same time, Punam Raut was in trouble as her bowling action was suspected.

It was a great opportunity for Diana David. She made full use of it.

India played their first match against New Zealand. Batting first, New Zealand made 139 in their 20 overs. Diana David rattled the batting order by picking up four wickets and giving away just 27 runs. She made sure to pick the wicket at the right interval to keep New Zealand calm. The total wasn’t tough but was a tricky one as India fell 10 runs short of it.

India v Pakistan
India was asked to bowl first and Pakistan with the help of Sana Mir reached 104. India’s Punam Raut made sure to help the team chase the total with a brilliant half-century. Diana picked up the wicket of Javeria Khan and was economical.

India v Sri Lanka
To book the semi-final berth, this match was important for India. While the Indian batters brought their A-game, it was Diana David’s four-fer that sealed the deal for the team and India reached the semi-final. She picked up four for 12.

Semi-final which was against Australia was the only match where Diana went wicketless, however, she was economical, giving away 15 runs in her four overs.

Despite India losing the semi-final, she remains the leading wicket-taker of 2010 edition along with Nicola Browne.