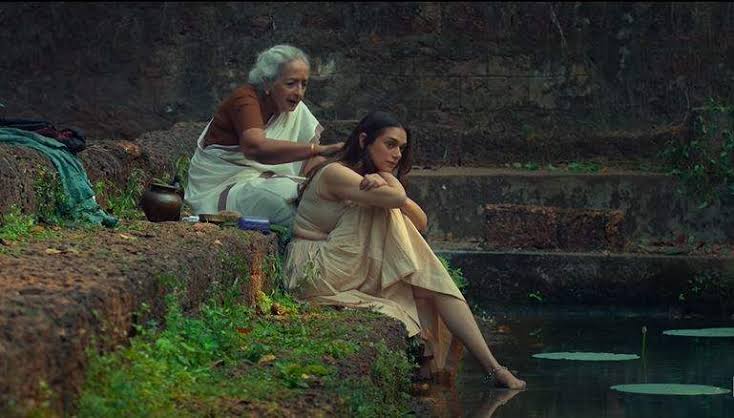 Sufism, a belief to seek the experience of God, a mean to reject materialism, is at a crossroads when it meets love. Sufiyum Sujatayum, by director Naranipuzha Shanavas, tries to conceive something otherworldly but falls short by its frail execution. Like a wilted leaf in the air, you see a man who doesn’t seem to set his course to his destination but only embrace the journey. He reaches a mosque in the early dawn hours. He seems to be sure of his presence in that place, like he has already been there. He confirms the same to the old man there by saying so. His name is Sufi. And he does a prayer call. He sings into the microphone in the most soothing voice anybody in the town has heard in the long time. The intention of the prayer call is to invite the people out there to join him for the prayer that’s about to happen in the mosque. And this piece of meaning is conveyed as a whole piece not just a supportive audio visual that’ there for mere establishment. Not many films have captured a prayer call in a mosque so lyrically this way.

As simple as any other event that’s set to happen, A death occurs. Sufi dies while he is praying. The most silent, unexaggerated death. Sufiyum sujatayum is not taking religion as part of their trope, just for an establishment to build its story around it. Religion is within its story in an unhampered way. Aditi, on another part of the world, jolts by a pressing dream and wakes up next to a kid and her husband who is at her arm’s length physically and emotionally. He realizes the disturbance in her but doesn’t turn around to query “What’s wrong?”. She lies down, hugging her daughter, to reassure herself that’s everything is alright. A death, on another part of the world, wakes her up from a deep slumber and SS is all about this ethereal connection, even though it’s difficult to buy this mystical trope. The film doesn’t try hard enough from an emotional investment from its spectators.

Though religion is the thing that creates a wedge between Sujata’s love and Sufi’s spiritualism, one doesn’t demonize the other. Sujata, who can’t speak her mind through her voice but only with her love for dance, never feels hindered by her disability. She devours the beauty of this world from her room, her dance and music just as anyone would do. Her ravishing appearance and indestructible confidence in life would make anyone fall for her. And she falls for someone too. Sujata is enchanted by Sufi’s inconceivable dancing skill and is seeped by love little by little everyday until she comes to face the reality. Religion doesn’t matter to Sujata. She doesn’t mind belonging to any other religion out there. Language/Religion/Caste/Creed, these are the things that create divisivenessand for Sujata, she doesn’t have a verbal language. She doesn’t see the world like the ordinary, self-absorbed people see. But the insubstantiality in conveying the message seems wobbly. It says Religion is in the mind of the people and not a real thing but we don’t see Sufi and Sujata explore these arena like we see in Annayum Rasoolum (2013). Sufiyum Sujatayum only sees to absolve themselves in an ethereal connection.

Sufi (Dev Mohan), with his gleaming eyes and kind smiles, finds the joy in seeing Sujata even though he is well aware of his commitment to God, won’t let him to submit to the worldly perishable happiness. He believes nothing but the divinity. He takes his master’s words as the almighty’s word and embrace it on the whole. He dies around the death anniversary of his master. He reaches the place from where he wants to leave this earth like he already knew his departure is nearing. But the metaphors are in the film might have been appealing to the writing but they surely are not strong enough to tug the heartstrings. If sufi’s rosary represents his submission to spiritualism, when Sujata ties it to her hand, it poetically depicts how the seek in love and spiritualism goes hand in hand. You find the God in love but Sufi decides to find the love in God. The later life of Sujata invites materialism while the drift in Sufi’s life is far from it.

What I found intriguing in Sufiyum Sujatayum is how the person, who has married Sujata, endures his trials with her. A decade of married life consists no amount of happiness to speak of. While he is howling in pain for not able to have Sujata completely to listen to his love, not able to make her forget her lost love, he expresses his want only through anger. His decade of impatience has clearly worn him out. But he makes a one final hard try when Sufi’s death occurs. It’s not Sujata who asks him to want to see him one last time. It is him who takes her. He hopes renew a new love with Sujata when she buries her love for good, when she says goodbye. But Can she?. Jayasurya gives a solid performance as a frustrated, trying husband.

Aditi Rao Hydari steals the hearts with her presence. She makes sure that we are with her throughout the film. There are times in her life she wants to cry on top of her lungs and let the world know that she is in pain. But the social construt and her emotional bind with her family, simply don’t let her and we get. But just because we get something what’s being conveyed, that doesn’t give the filmmakers the advantage to brush it aside. The film starves a deep exploration on simply anything. A vague sad tale doesn’t have much to offer. There are moments in the film those are intended to ingest pain, like Sufi crushing a broken bangle of Sujata into a fish pond and I cared more for the fish as it might mistake this piece glass for food.

Sujata and Sufi communicates through a diary which was a gift from her future husband Jayasuriya. She literally builds her own love on a souvenir that’s from another love. She only cares about her world of joy. She waits in her room, listens to Sufi sing at every dawn. She breaks loose and dances in her solitude and cares about nothing else, transcending into an ethereal connection that’s out-worldy to the commoners. And in the 10 years of her marriage, her husband has not seen her dance in once. But all these information are verbally out there but nothing strikes us. Nothings breaks our spirit or makes us go awe. These details are just built but not in a way to reason with us. And that makes it difficult to buy into this “Once upon a time..” tale-worthy kind of story. I sadly had nothing to take away from Sufiyum Sujatayum except an exceptional music by Jayachandran M and a stunning Cinematography by Anu Moothedath.