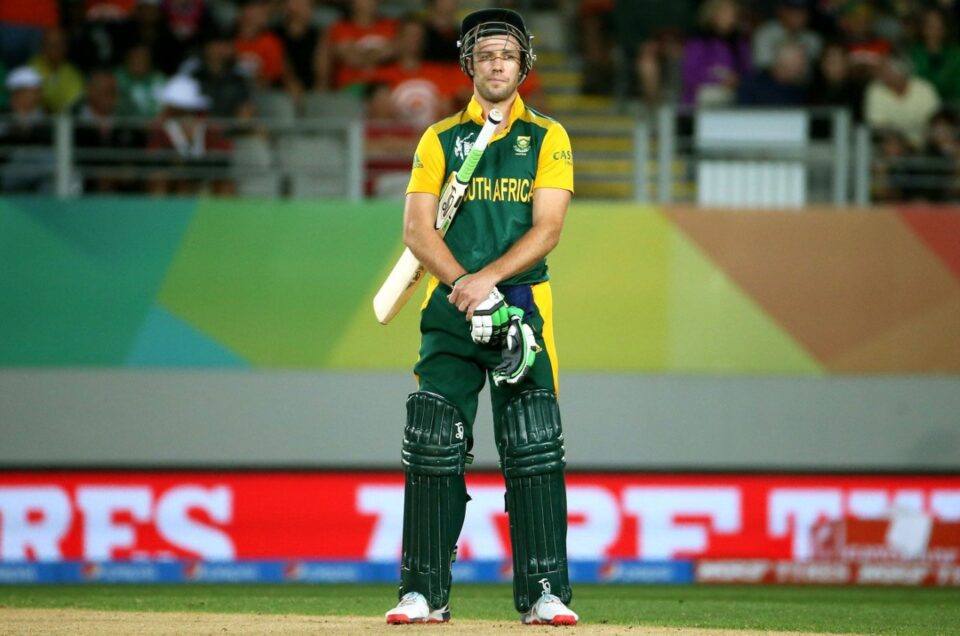 2015 World Cup Semi-final was supposed to be AB de Villiers’ night. The team that had always half-glass empty, had to fight the demons of the past to get there and surprisingly, D/L Method was with them when it gave them 16 runs extra. ABD did well too; 45-ball 65 on a night where every batter came good. The team almost pulled it off with early wicket but the Elliot nightmare happened; changing the script of the chase but ABD had his part to play when he goofed up a run-out chance to dismiss Corey Anderson. Had he collected the ball clearly, things would’ve been different. From half-glass empty, South Africa had the whole glass broken, left alone on the ground, shattered.

This would’ve killed ABD and the frustration fuelled the tears that day. The press conference was emotional, everybody wanted to hug him. Soon, he didn’t hang around for a while. He said that he ran out of gas even when the runs were free-flowing from his bat and a couple of years later, he waved goodbye to the Green and Yellow jersey.

Still, he could return. Still, there is a possibility that he would step on the current players to get back into the eleven. The management wouldn’t mind because even at 90, ABD could still perform better than most of the players in the team.

Now, that most of them are gone, these underperformers are just wandering all-round the places, in search of the light. Nobody had put their foot forward yet to be the light for the team. Yes, there were occasions where the team had the light, the sun but the sun had set even before the day could get over. Some of these performers took the easy way out, became freelancers as they had to put their family first.

When ABD came into existence, the team had different poster boys led by ever-lovable Kallis who was the brightest spot. After a poor start to the career, ABD became close to the brightest spot and slowly took over. His name started to appear in whatever records were there. Fastest ton. Check. Bat for hours all alone. Check. Bat for hours to save your team with your best friend. Check. Keep wickets for the team. Check. The list kept growing each year and with T20 becoming a major thing, ABD had put his best foot forward and became the globetrotter.

Oh, he hated bowlers. Perhaps bowling too. Had he got into that just like he did with the batting and the keeping, there would be a separate list with only his names on it.

CricInfo stats bring out crazy numbers when you search for ABD. Although it isn’t surprising, you might wonder why superman has to be mortal. Why can’t he just keep going? For his country? Did he hate the colour of their jersey? Did he want them to make it all pink? The management would have even ready to go nude for a man like ABD. Now, nude is a colour too. Not obscene. Not bad but again, the otherwise would be a reality if ABD was ready to stay.

**
Sachin had drives to show. Lara had that back lift. Most of the players(Read Wolvaardt) had made cover drive look sexy. Dilshan had the scoop. Rohit has the pull. ABD would laugh at all these people for having a signature shot. For ABD, he doesn’t like one. All that mattered to him was hitting the ball with the bat. He saw the latter just as property. A simple tool. If he had a notebook instead of the bat, he would still love it. He doesn’t like kisses. He kills the ball. He slaps them until it goes out. He doesn’t hit the ball to the boundary but to the stands. It’s a six only if he gets past the first row of the crowd. He would sweep, scoop, reverse sweep, loft, drive, cut, pull, whatnot. He would manage to reach places where even the cleaners of the stadium could never reach. Maybe, he loves to keep things clean. Maybe, it was his way of cleaning the dust off the stands.
**
When he is not batting or keeping, he prefers to fly. He turns into the flight or airplane whatever you call it to get the ball back into the act. Sometimes, he would do soul searching on the field to find out whether he is a spiderman or the superman. The ball is just a tool for him to identify them.
**
He defines and redefines hope and trust in whatever teams he plays. People love him for it. People hate him for it. He cannot simply come into a team and make it his home and play with people’s emotions. He does all that. He would simply come out, show off his skills, have some bromance with players out there, make you fall in love with him and drag you to places but ends up on a low, sometimes, even worse. Rock bottom. You cannot control but to sit down and cry with him, tell him that it is going to be okay. This will be our year. Ee Saala Cup Namde. It’s a cycle. At least has been one. This year, it could be different. Of course, he is getting old. He would love to get off the cycle too.

Nevertheless, he would love to go out. Bat like nothing has happened. Bat to give his fans hope. Gets all the praise. Help fans to make new memories. Fans, damn, they love him. Would keep loving him even if he couldn’t get them the trophy and he loves them back.

Why Women cricket is not popular in India