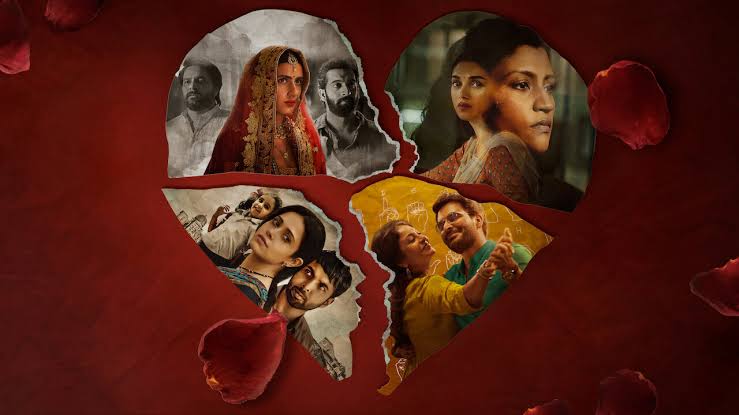 Ajeeb Daastaans, a new anthology film, consists of four shorts that show the lasting scar that a fractured relationship can leave in people. In Kayoze Irani’s Ankahi, You see a man who wants to confess his love as loudly as he could, who screams his love only in his head to the woman he loves. In Neeraj Ghaywan’s Geeli Pucchi, You see the love gets trumped by caste, where it requires the privileged woman to harness most of her power to fight what’s inconveniencing her while the under-privileged is fighting tooth and nail just to get noticed for her prowess. Raj Mehta’s Khilauna focuses on the bitterness of the poor which could be dangerous for the rich if they aren’t careful about their privileges but unsuccessful in its attempt. And Shashank Khaitan’s Majnu, the first short in this four-part anthology, tries to capture a loveless love but it’s something amiss despite Jaideep Ahlawat’s smooth performance.

Ajeeb Daastaans deserves its view for the last 2 shorts of this four-part anthology. Neeraj Ghaywan’s Geeli Pucchi is a powerful commentary on caste struggle. Kayoze Irani’s Ankahi exhibits a hint of magic and a little bit of hope in a fractured relationship.

In Geeli Pucchi, Konkona Sen Sharma gives an arresting performance as Bharti Mandal and Aditi Rao Hydari plays Priya Sharma, a demure young lady, who’s partly guilty of her privileges but doesn’t do anything about it to cause any inconvenience.

Take the scene when Priya Sharma says to Bharti Mandal that she has to share her living space with 11 members of her husband’s family at home. Neeraj Ghaywan correlates the economic status of this privileged woman to the fact how it, in no way, hinders Priya to get a job for she appears, how it’s overall a walk in the park to her for the job she’s hired. And for Bharti, even with her right qualifications and ambitiousness, it takes a monumental effort to just put a foot in the door that she aspires to enter. It’s loudly expounded that Priya Sharma doesn’t have to do well economically than Bharti Mandal to get enough elbow room in workplace to get what she NEEDS. While Bharti is trying her best to stand up for herself, to stay uncompromised in the eyes of patriarchy, she is constantly being preyed by the caste-hierarchy. She has to put 2-1 a fight every day. Priya is a prey to patriarchy but not to caste, and her fight is 1-0. Priya is already within the claws of that beast. Bharti decides to take the ringside seat, to take advantage of this exploitation, formed by the society that’s been burdened on them. Priya’s fight against her systemic predator, which is oppressive and wrong, is in her own hands, unlike Bharti’s collective struggle, which has to first let her get the accessibility to fight against what Priya has to fight in the long run.

KayozeIrani’s Ankahi segment is something quite special that strikes you by its honesty of emotions, by the integrity it cares enough to carry. The ever gorgeous Shefali Shah’s performance is magnificent and so does she. The film is Streaming on Netflix.

Why I loved CCV