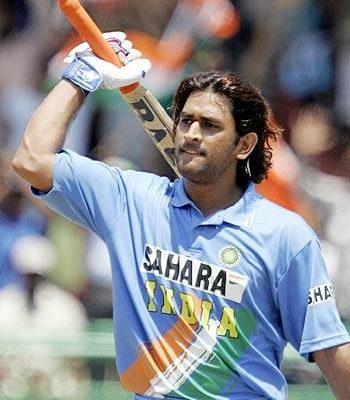 Indians have always been good at taking a gamble of decision that later turned to a masterstroke. From opening with Sachin Tendulkar to opening with Rohit Sharma. There have been a lot of gambles, but this particular one was unbelievable yet turned out to be one of the best decisions ever.

India was taking on Pakistan, and it was the second ODI of the series. Sourav Ganguly was lucky enough to win the toss and he opted to bat first. India lost their first wicket in the fourth over as Sachin Tendulkar got out for just two. While everyone was waiting for the captain Ganguly to arrive, there walked out MS Dhoni. This was a gamble and did shock, everyone, as Ganguly gave up his best batting position to someone who was just four ODIs old. Dhoni’s international report card before that match had nothing, and his highest score was just 12 before that, but he kept knocking the doors of the selectors with some outstanding performances in the domestic circuit that includes two tons against the Pakistan A team. It was just the instinct one thought.

The visibly nervous Dhoni took the inspiration from Sehwag who as usual was smashing the deliveries from the word go. Dhoni looked in awe as Sehwag smashed Razzaq for consecutive boundaries. Sehwag looked as if he loved to show the then 23-year-old how it’s done. Lesser did he know that he equally can smash the deliveries. A few minutes later, Dhoni started to play a knock that had everything for everybody.

For the aggression lovers, there were four sixes over long off and mid-wicket. For the orthodox shot lovers, he displayed a beautiful cover drive. His innings had lofted shots over the keeper, something that would remind people of Sachin Tendulkar, there was a cut through the point, a shot Sehwag would be proud of.

India was 122/2 when Sehwag dismissed for 74 off just 40 deliveries. He was followed by Sourav Ganguly who struggled right from ball one. Dravid then arrived at the crease.

At the one end, you have a gentleman who is a perfectionist in everything. On the other end, you have a kid with long hair bobbing in a line with his shots while the hair colour shining brightly under the sun. He looked completely different from Dravid. While Dravid goes for a beautiful straight drive, he smashes the same delivery over the mid-wicket.

He reached the 90s and was still hitting the ball hard. At one point Dravid had to call him and ask him to relax after taking a dangerous run once. As he hit the ball over the boundary to go to 99, Dravid knew he isn’t going to listen but was watching his knock with the utmost happiness because India wanted a wicketkeeper who can bat like this. Those days, India had a long batting order that the wicket-keeper normally played at number seven or even below that. This masterstroke from Ganguly did shake up the batting order a bit.

When Dhoni reached the century, he started to hit each and every delivery, and the result was excellent. Not every day you’d see Shahid Afridi go for 10 runs per over. It’s rare, even in T20, even when he was 37 years old. Such was the domination showed by Dhoni that day.

At 148, Dhoni found Shoaib Malik’s safe hands when he tried to hit Hafeez’s delivery. The knock consisted of 15 fours and four sixes and deserved standing ovation from the crowd. He walked back to the dressing room as a different man. Years later, the aggression stayed while the calmness mentally took over. If not for this gamble, we might not have seen one of the best wicket-keeping batsmen if not the best and even more.