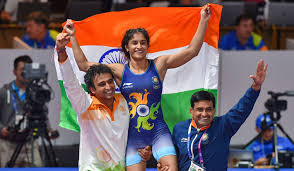 She defeated Japan’s Yuki Irie by 6-2 in the final. In the 50kg category, Vinesh Phogat was the favourite right from the start.

Putting behind her heart-breaking loss at the Olympics two years ago, Vinesh began her victorious campaign with a revenge win against Chinese Yanan Sun against whom she had suffered that terrible leg injury which cut short her journey in Rio. She defeated Yanan Sun by 8-2.

The next opponent was Korea’s Hyungjoo Kim by technical superiority.

The semifinals lasted just 75 seconds and Phogat won by 4-0.

The Dangal-fame Vinesh Phogat is also the first woman wrestler to win two back to back medals in Asia games.

she also won back to back gold medals in Commonwealth Games.