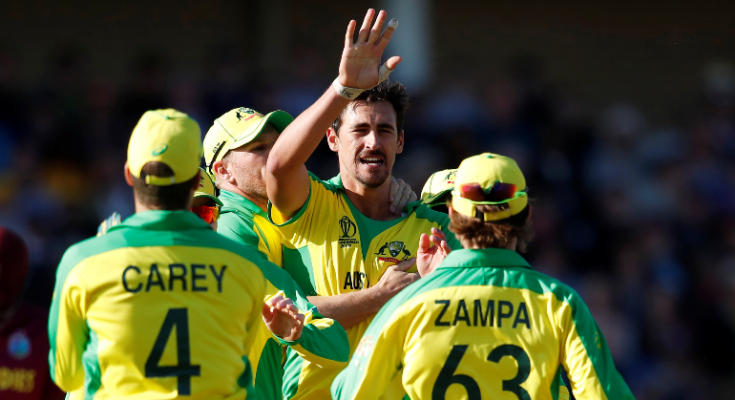 Australia’s winning run continues as they rattle West Indies by 15 runs, thanks to Starc and the poor shot selection of West Indian batters.

In fact, the West Indies team has to blame themselves for not capitalizing the situation after pushing Australia to 79 for 5. The pacers did all the damage and once again it was Steve Smith who had to play the anchor role around Alex Carey and Nathan Coulter-Nile.

Smith went on to make 73 and it took Cottrell’s brilliance at the boundary line to dismiss him. Coulter-Nile who struggled initially with the short balls found his form at the right time for the team as he smashed an important 92 off just 60 balls, took Australia to a commanding total of 288.

Braithwaite took three wickets while Thomas, Cottrell and Russell managed two but the pick of the bowlers is undoubtedly Cottrell for his line and length.

While chasing the same, West Indies lost Lewis early and after surviving twice through DRS, Gayle got out for 21 off 17 deliveries to Starc who actually bowled a big no-ball a delivery before the one in which Gayle got out. Had that was given a no-ball, Gayle would have survived.

Still, Shai Hope looked firm for his 64, and the lower order batters added quick runs to keep West Indies in the hunt till the last over but that wasn’t enough to pull off a win against Australia as Starc found the perfect line and length to send five West Indian batters back to the dressing room and while doing so, he became the fastest men’s cricketer to pick 150 wickets in ODIs.

We have to blame the poor shot selection of a few of the batters as well who swung the bat at everything despite playing a sensible knock.

With this win, Australia moves second in the points table.