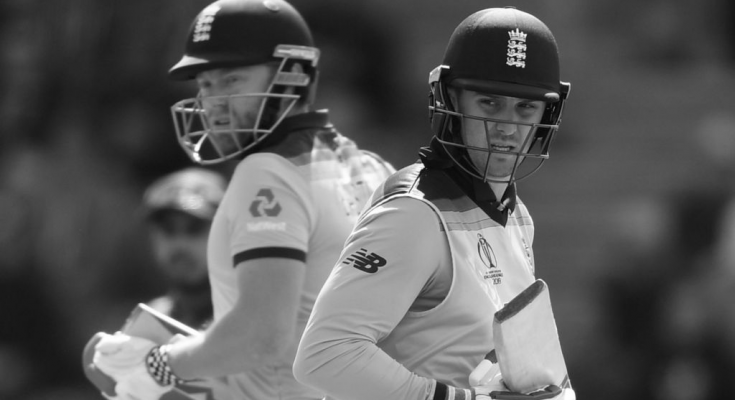 He stands at the leg stump, gives a bit gap between the ground and the bat, watches the bowler as he starts to run in, he moves. Moves across the stumps to make sure he reaches that fourth stump area. He sees the bowler dropping the ball short, he picks it early, raises, swings the bat from the fourth stump area in order to create the speed does a full role and ends it with the bat parallel to his body. The ball travels faster, sails over the boundary line, most of the time. You can hear the sweet sound once he hits the ball. All that the opponents can do is watch the ball as it reaches the boundary. If you think Roy’s pull shot is pretty, you must see his flicks. The way he ends the stroke on one leg is like a dance’s finishing move. Gracefully Beautiful.

His guard is too good for him that it helps him to swing his arms easily. No, Roy is not all about the big shot. He can pick up the gaps very well. Sometimes, the delicate touch to get the ball past the point, the cover drive that only leaves you wanting more. He keeps things orthodox most of the times, but if he is in the mood, you would see reverse sweep more often.

On the other end, Bairstow would watch Roy go on hard at the bowlers, and he would wait for his turn. Lifting his bat so high that it looks like as if he is holding a baseball bat. The bat is ultimately at the height just above his helmet. He stands still. His bend is in coincide with the bend of the bowler, he reads the ball, and his lift gives enough power to hit the ball. Quick his hands move for every single delivery. It might not be pretty, but it’s powerful, and you need that. Once Bairstow gets into the groove, he keeps going while Roy gives him the strike. They take turns, but at times, they both go berserk where they move together, hit together and destroy the opponent together.

If they are in the groove, they don’t wait for a bad ball, but they create one. They cast a spell on the bowlers so that they end up bowling towards their strength, of course, they both are mischievous magicians when they are together.

It is almost impossible to separate them and if one thinks that their weaker link is spin, considerably yes, but it is still jaw-droppingly better than what people think. The only place where they had often let their guards down is at the Asian conditions, well, again, comparatively.

More than the partnership, what they both share is that they both have a fair share of terrible moments in their life but has grown out of it by using the pain as the motivation.

***
Roy came into IPL and didn’t play a lot of matches and was sidelined. It did affect his confidence mentally. It was one of the main reasons he decided to skip this year’s IPL and also, he wanted to spend more time with the family. Most recently, before the Pakistan contest, Roy’s kid who is not even a year old fell ill. Roy had to fight the nightmare as his kid couldn’t open the eyes for hours and was still. Roy had to rush to the hospital and the kid suffered from a stomach infection and fever.

Roy’s wife was super supportive that she wanted him to play the game. So, Roy had a couple of hours of sleep and had breakfast and went to the match directly after a little warm-up. He ended up converting his start to score a ton.

With the high dose of confidence added to their partnership, Roy and Bairstow without doubts will look to go deep against the Blackcaps.

It’s the matter of four years of team building that started right after the day of their exit in the 2015 World Cup that has helped the team to come this far, and this is probably their best opportunity to lift the cup. They will not go down easily and all eyes on the Blackcaps to stop them.