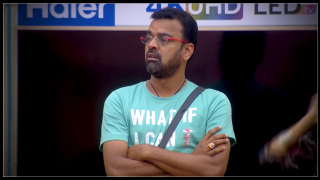 The episode started with Balajee abusing Nithya and Sendrayan trying to calm him down. Balajee started asking why she joined Bigg Boss and Balajee never stopped abusing her. Bigg Boss announced that it is the time for the guys to serve the girls. Boys were not so cool in doing it. They took it to their heads and couldn’t handle the fact that girls are ordering them.

Nithya gave all her chores to Balajee and Balajee’s BP got shoot up. There was a fuss between Daniel and Vaishnavi but the latter was not wrong. Others were cool and to our surprise Mumtaz never got irritated and did her work silently.

Girls couldn’t take it when Balajee started abusing Vaishnavi too. Vaishnavi focused the camera and complained Bigg Boss about his behaviour and we are waiting for Kamal Hassan’s words about Balajee’s nature.

I am a Meme Creator and I am proud of it!