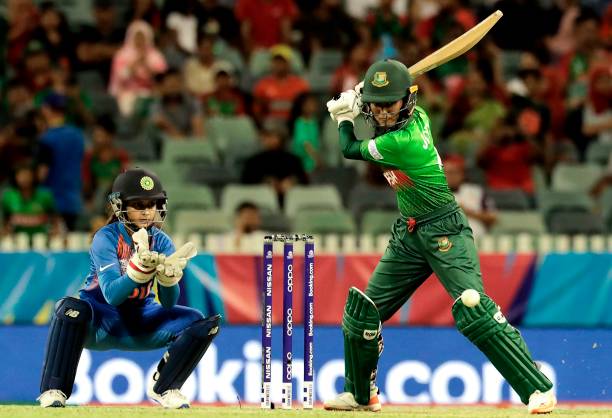 Cricket was the first thing Nigar Sultana knew. She literally walked with bat and ball. However, coming from a small town in Bangladesh, taking up the sport is not a go-to option.

There were talks, emotional blackmails, trolls and abuses from all parts but it was her mother who stood by her aim.

During her early days, she would go along with her brother to practice.

2014 it was. With some good performances, Nigar Sultana got a national call up. She was a part of the camp but unfortunately, she couldn’t make it to the team.

It was just the beginning for Nigar Sultana. She was determined to get back out there and was working hard more than ever.

Her mother would be there right from the word go, she would travel along with Nigar Sultana, not only to take care of the practice, to encourage her but also to make sure that nobody abuses or trolls her. The gender inequality is still an issue and that’s for a different day.

In 2015, she played her first ODI and showed the glimpse of what’s in stores for the future. Bangladesh took on Pakistan that day. Anam Amin 4 for 7 destroyed Bangladesh batting order. Coming at number 8, she showed resistance with 109-ball 30*. Though Pakistan won the game, it was certainly a positive sign for the youngster.

Her second biggest knock came against South Africa, an unbeaten 59. She had starts and utilized the less opportunity she gets while batting down the order, Asia Cup win against India must hold a special place.

It was a collective performance from Bangladesh to dismantle India and to steal the Asia Cup title. Nigar knew it all along. She wanted to keep things simple. She wanted to take it just like another match despite knowing what would be the reaction if the team could win the match.

The day arrived. India batted a bit poorly and of course, Bangladesh did well to restrict the team to 112.

Chasing 113, Bangladesh had a good start but Poonam Yadav changed things upside down.

Sultana joined by Hoque had a bit partnership going but the latter got out for 11. Then came Rumana Ahmed.

The duo began slowly. They knew they had a long way to go. However, the run-rate began to climb up. Somebody had to take the attacking route to keep things right.

Sultana it was. She saw Goswami coming in. Probably, the most experienced player in the team and it takes a lot to attack her. Sultana had to. For the team.

She came forward, attacked the line, scored a boundary over mid-off. It was no fluke. To prove the same, Sultana picked up Goswami earlier. She knew Goswami would be bowling a fuller one. She was ready and the next second, you could see the ball going in the direction of backward point towards the boundary.

This did frustrate Goswami who came back to bowl her go-to delivery. It was quick. Sultana did not expect it. Of course, Goswami is clever. Sultana, at the last moment, had no choice but to open the face of the bat. There was a delicate touch. The ball went slightly away from the keeper for another four. This changed everything.

Sultana top-scored with 27 that day before getting out to Poonam Yadav. Though she got out at the wrong time, she did all the damage that was needed. Bangladesh went on to win the match and the title.

The Asia Cup match was the beginning of many good things for the women’s team. Sultana is still very young and already has a ton in T20I cricket.

The ton came against Maldives women where she came in after the team lost two quick wickets. With 14 fours and three sixes, Sultana smashed 113* off just 65 deliveries. This certainly was one of the biggest knocks in women’s cricket.

With years to come, Sultana certainly will end her career as one of the best players in the women’s cricket and as a reason for Bangladesh girls to pick up the bat. Oh, did I mention she is one of the best keepers around today?

WHERE DID INDIA GO WRONG?