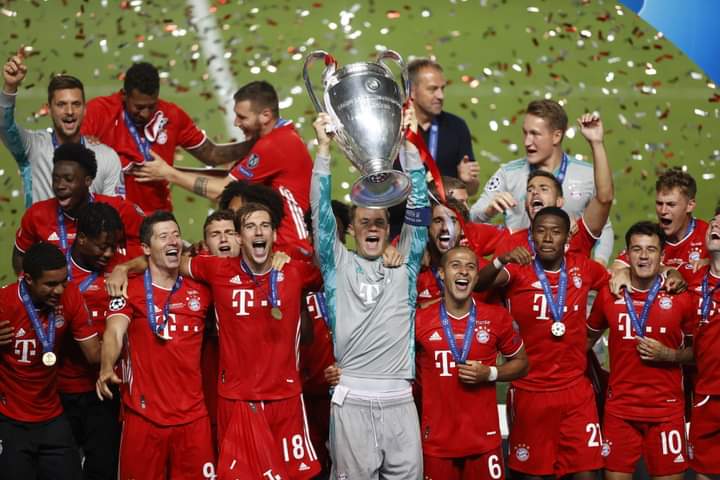 The Giants Bayern Munich have won the UEFA Champions League for the sixth time in the club’s history after beating French side Paris Saint-Germain 1-0 at the final in Portugal’s capital, Lisbon.

Bayern had a good tournament winning all the group matches till the final and had a tough match against PSG who were giving it all.

Talking about the line-up, Bayern made one big change, swapping Coman in for Ivan Perisic on the wing. While PSG had the same semi-final line-up, excluding the goal-keeper change where Navas was back after missing out a match due to injury.

Right from the start, Bayern was trying hard to get past the PSG defence. However, PSG found a way to fight back by winning a free-kick within 15 minutes of the play. Tension prevailed as Neymar took the kick but couldn’t get through.

Mbappe then almost had it but Bayern was good enough to defend them. Neymar then followed it up. He tried to get in behind down the left-hand side but Neuer was quick enough to save it.

Minutes later, the momentum shifted towards the German Giants with Lewandowski beating Navas but the ball had hit the post.

After being set up by Neymar, it was Angel Di Maria’s turn but he couldn’t get it through as well.

After a hard-fought first half, the second half began with Gnabry seeing a yellow card for clipping Neymar’s ankle.

The turning point of the match was at the 59th minute where Kimmich lofted the ball from right far post and Coman took the opportunity to score with a header taking the score to 1-0.

PSG then tried their best to equalise and their real chance came at the stoppage time where they almost had it. Mbappe after cutting through passed the ball to Neymar who quickly sent it to Eric Maxim Choupo-Moting. Unfortunately, the substitute couldn’t convert it into a goal.

In the end, Bayern Munich had the last laugh by picking up a 1-0 win.