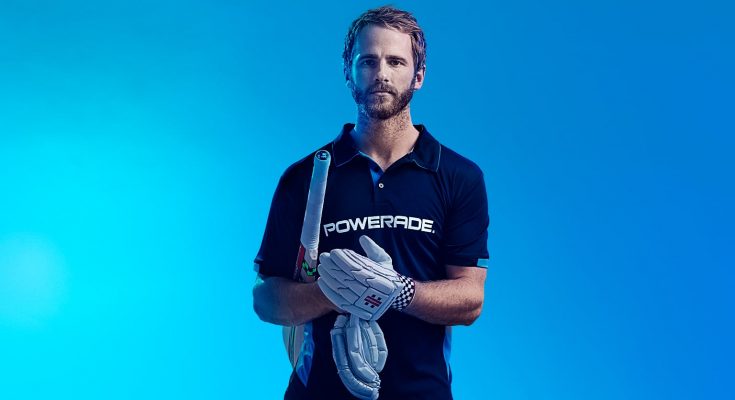 Guptill once again left stranded at the crease as his partner fell early. Suddenly, there was silence. We see a man looking up the sky, walks in; holds the bat slidingly pointing towards the ground. The bat stands still. A fist bump with Guptill as he walks to take the guard.

‘Leg’, he says, practices drive. He swiftly swings his bat to and fro after tapping it once. As he sees the bowler runs in, he slowly moves towards the off-stump, takes the ball late. A gentle touch and the ball runs to the boundary. The bowler kicks himself for bowling such a delivery. Of course, he did all right, but it was #Williamson’s brilliance. He then comes back, picks up wickets at the other end as he knows that is the only way. Then he runs to bowl once again to Williamson. The ball is as nice as Williamson is, and goes through the gap, once again. While the bowler walks back, he realises that was the same delivery that gave him the wickets. He stops a bit to realise how difficult it is. Williamson, on the other hand, stands still just like he was when he came to the crease.

Williamson crosses fifty. He looks like he is out there for the next milestone, determined. He sees a spinner grabbing the ball from the captain. He runs in to bowl his wicket-taking delivery, something that got Williamson out early in previous matches. The bowler quickly recalls what he saw in the old videos of Williamson. A wicked smile. He thinks that he got his man. Looking at the action, Williamson reads the delivery. He moves backwards. He pushes himself to an awkward position. He tries to get back, but it was too late. He knows that he had made a mistake. Still, Williamson goes with the shot, tells himself to play it down, play it with the straight bat. The ball doesn’t turn much, but there is much turn to surprise the best batters in the world. It wasn’t a good ball, but great. Normally 9 out of 10 batters would get out but Williamson’s instinct which is on par with other ’10th batter’ in the world, saves him one again. A tiny gasp. For Williamson. For the bowler. The emotions are different, though.

Moments later, there is a conversation in the middle among the bowler, keeper, captain and a few senior players. They discuss Williamson’s weakness and strength. Nobody couldn’t think of one in the either, and thus the team scratches their heads. Williamson has learnt the entire textbook shots and added his own recipe of elegance to it, and so none of the shot would look like it is his best because every single shot he plays is. Captain says he prefers backfoot cover punch, and they finalize to tempt him to play a lofted shot to the cover fielder.

As planned, the bowler changes the speed and Williamson reads the plan, leaves the delivery. Emotionless.

After the persistent attempt, Williamson finally plays the backfoot punch and still finds the gap. The bowler smiles because he couldn’t do much.

Once again a backfoot punch through the covers and he reaches his hundred. There is no fist pump. No jump. No sword celebration. No arrogance. No emotions. Nothing. He pauses, then lifts his bat towards the dressing room, takes his helmet off, shakes his head, runs to shake hands with his partners, a smile and he gets back to work. The determination in his eyes to take New Zealand home is obvious.

The bowler understands that he miscalculated Williamson. Of course, we cannot blame him. Coming from a tiny place which has population lesser than Tamil Nadu, Williamson might be the best player in his country, but not many have watched him play that regularly. He is not Kohli, #Root or Smith to play literally every single month. He plays in a series then he has to wait for six months for another series. While he plays in his home, most of the other countries would have slept or enjoying their sleep. When playing in overseas, A few see him, the number that is lesser than #Kohli or #Smith’s fan pages on the internet, but again, a few don’t because they don’t tour to major, higher-ranked tricky countries more often. Thus his achievement and play go without notice.

While we talk about the fab four, Williamson’s record once again goes unnoticed because of the number of runs the other three scores. To Williamson’s defence, he has better numbers when it comes to the fourth innings, and his average difference between the home and away is lesser than the other three. Still, he finds it difficult to grab the fans like the other three does. He doesn’t care, though.

All the four brings something to the field other than the runs and the leadership. For Williamson, it’s the amount of calmness and maturity to handle any kind of situation. Of course, being kind and generous normally comes to the Kiwis but to absorb all the negativity to try zero them out single-handedly is his superpower. He can joke after losing the World Cup by a pin-size margin. He can stay calm even after winning Test series. These things come naturally to him, more than his batting.

Williamson gets out. The strike-rate reads below a hundred. There are whispers, keyboard warriors passing their comments and the commentators blasting him for his inability to play the T20Is. He reads them all. A normal man would be furious reading it all and would show his past records and prove them wrong, but he is Williamson. The introvert who uniquely has this fear of missing out. Williamson doesn’t want to be left out. He wanted to impress everyone. He wanted to be loved. He invited his critics, the ex-cricketers and had Tea with them while asking them to help him. They share knowledge. In the next T20I, he smashes runs at a strike-rate over 130. Still, Emotionless. He doesn’t write articles on how his persistence and his practice helped him rather he simply gives the credit to the players.

With time, he learns how to play those lap shots. These shots come in handy with his orthodox skills. He then learns to take guard at the off-stump to help himself in using the bottom hand more. He started clearing the field with ease. While everyone sets him a field for his backfoot punch, he successfully manipulates the bowler.

Nobody believes in numbers more than Williamson does. He scripts plan for every single batter out there, and all you need to do is to follow his instructions if you didn’t bring a plan of your own. Even if you have other plans, he accepts it, gives you what you want, trusts you and backs you. No matter how badly you perform, he still will have nice things to say about you.

If there are many qualities for choosing up role models, Williamson would possibly tick off all the boxes and might add a few on his own.

Happy Birthday, Kane Williamson. I love you, you are my happiness. You always will be. Thank you for being there. I love you more than you’d ever know.