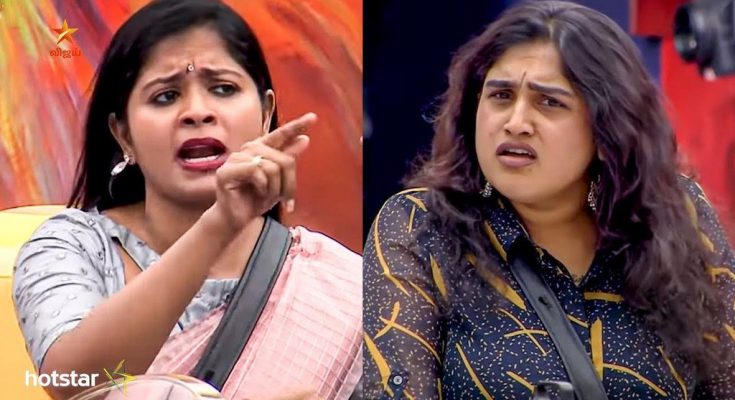 Madhumitha and Meera, the two women who seem to find themselves cornered in the Bigg Boss house, finds the issues come at them intentionally to provoke them in this game.

Madhumitha is asked by Bigg Boss to share a motivational experience to help others in their life. When Madhumitha begins to share how the environment at her home exists towards all the norms in cine field, where even hugging a female colleague seems peculiar and not surprisingly received at her home, Housemates couldn’t relate to her level and finds her who is incapable to adapt before she even finishes what she has in mind.

Vanitha interrupts her speech and tells her she is off the track before she even gets the chance to complete herself. And few others like Reshma, Kavin, Shakshi goes with Vanitha’s opinion whereas Tharshan, Losliya, Cheran feels Madhu should’ve given a chance to complete what she started.

Vanitha even paints a picture of Madhu of who is ungrateful to her work when Madhu begins to say she avoided going to audio launches and other work get together in the beginning of her career when Madhu was about to tell that she changed herself a bit when it comes to work. Vanitha and Sherin takes Madhu’s words out of context and calls her a hypocrite.

Madhu opens up to Cheran, Losliya, Tharshan later that she is all alone all her life because of the way she brought up by her family. She yearns that she could have been like others if she had had a different upbringing. They comfort Madhu that she can’t please everyone and that’s not her job too. They just give her their wise advise to be who she really is and not to change herself and get attached with the things she sees and hears.

Luxury budget task is announced for which housemates are separated into 4 teams. Vanitha wins the first task and brings 1000 points to budget whereas Shakshi and Tharshan play the second task which is a picture assembling puzzle board. Meera, who has to only read them the task and not help them in any way, just keeps cheers and tells them to focus on the original picture. Seeing this, Kavin accuses Meera that she helps them directly or indirectly which is clearly against the rule while Meera says she just told them to focus the picture and that’s not in any way helping them.

Vanitha, Shakshi and Abirami seem hostile towards any actions that is Meera is a part of and Vanitha boosts such attitude. Meera breaks down and says the issues are conjured towards her intentionally only to break her.

When Meera says to Mugen that she stopped talking to him for the past few days which he isn’t aware of, she tells him that some people in the house don’t like anyone to be a companion to Meera and they intends to break it apart. For which, Mugen counters and says that’s not for anybody to decide. Shakshi, who heard an half-baked story and develops it to Vanitha and others. Shakshi says Meera tries separate Mugen from Abirami and Vanitha portrays that as Madhu and Meera who are a couple of people who do character assassination.

Abirami believes it and flares up inside with this undeveloped, non-existing story. Kamal has to show a short film (Kurumpadam) to tell them what it is the truth. Well, It is just Tuesday and we have 3 more days to go and this story will surely seem to swirl like a tornado before that.