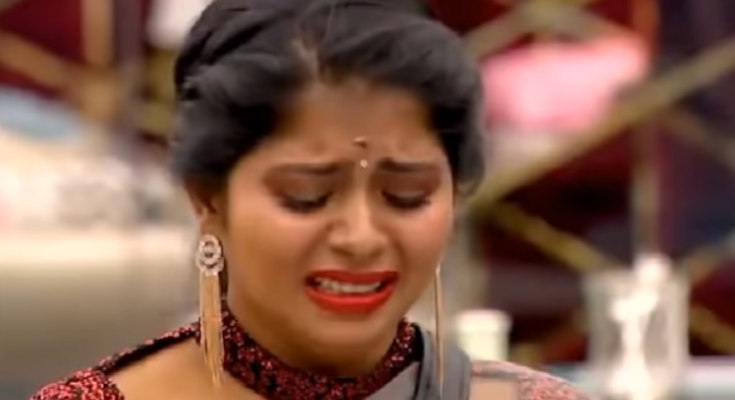 The weekend is here and the host Kamal bags a lot of knacks to give the contestants his piece. We peek into the house to see what happened on Friday before they get on with Kamal today. After Vanitha takes Meera’s side during the dispute between Abirami and Meera, Vanitha and Meera seem to make peace with each other but Vanitha influences Meera’s opinion on Madhu and Fathima to turn her against them. This breaks as a crack between Fathima, Tharshan and Meera.

Kamal meets the contestants and asks only the men in the house about their opinions on the things that go around in the house as it seems they are not given their chance to speak up. They voice their opinion as most of the problems seem silly and unnecessary. Madhu is given a chance today to complete her motivational speech which was interrupted by Vanitha the other day. Opinion on Mohan Vaithya’s captaincy is asked among the housemates. To which, only Madhu is not satisfied with his effort.

Kamal attests that the excellent effort by the cleaning team in th house in the history of the Bigg Boss. A jolly game is played in which contestants are asked to tell the good and bad they see on their respective adversaries. The housemates are asked to vote one of them they want to evict from the house. Madhu gets the most votes and pushed to a precarious state. And Kamal reveals the most awaited announcement of this week which is “Who is saved?”. And to most of the housemates’ surprise, Madhu gets saved. She breaks down in with tears gratefully to the viewers. There is such a relief on her face after she lets out her agony for being suppressed in the house. Shakshi, Vanitha, Sherin and Kavin seem baffled to the announcement and doubt themselves for how things are perceived by the viewers. Kavin looks perplexed as the response from the viewers is signalled in favour of Madhu’s opinion on Kavin and Vanitha tries to stir more his confusion. The housemates will try to pass this night nervously to see their first eviction of this season tomorrow.