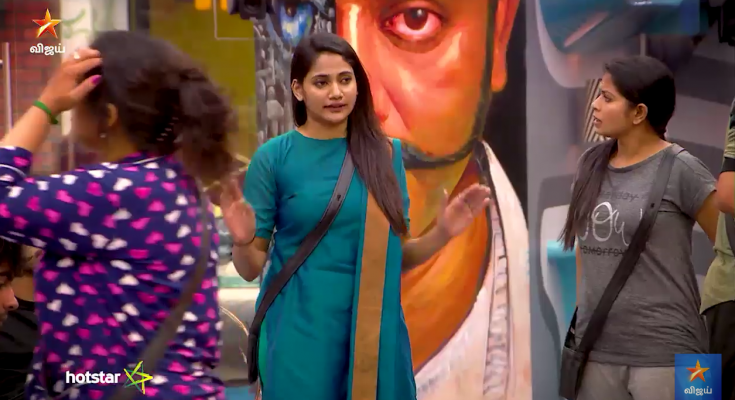 While the murderer in the Bigg Boss house keep doing the killings without gaining anyone’s doubt, Bigg Boss gives Police investigator roles to Kavin and Meera and Sandy, who possess the power to communicate with the spirits in the house helps investigating the case. As they interrogate people in the house, Meera has a hunch that Mugen might be involved in the killings. Bigg Boss passes the order to Vanitha to kill Kavin by confiscating his weapon without his knowledge. Kavin dies and Meera is the new head investigator.

While Meera’s hunch goes unattended, Cheran involves himself in an argument with others and Bigg Boss on behalf of the ghosts who stay in the yard under the sun. He demands an explanation on the luxury task as he is confused by his role because he and many others are idle and not given any roles to perform. He ends his note as he would like to be removed from the task if his questions aren’t answered. Housemates disagree with Cheran as the task is an order and they are bound to continue that.

Kavin, who doesn’t get into his role as a police inspector seriously and playfully investigating the housemates. Sakshi seems a bit averted towards Kavin as his relationship with Losliya is slowly developing which ends up hurting Losliya.

From this Luxury task, 3 contestants are chosen as the best players and are given a chance to participate to cease next week’s captaincy. Vanitha, Sakshi and Mohan are the candidates. Abirami, the captain, is asked to name 2 contestants who have not cooperated well in the task. She chooses Cheran and Saravanan. Saravanan doesn’t agree with her choice as he says he has been cooperating well. And those 2 housemates are asked by Bigg Boss to go to Bigg Boss jail. Vanitha points out that it is Kavin and Cheran who argued about the task and ready to give up if the task gets anymore difficult. So the housemates discusse once again and choose Kavin and Cheran who don’t cooperate with the task. Losliya volunteers to go to jail as she claims sge has been distracting the house from the real murderer intentionally. But she is talked back by Vanitha as this is not a competition to see who sacrifices. Losliya is hurt and cries and Kavin tries to console her while he goes to jail. Luxury task ends before this Friday. We will.wait and see what tomorrow’s episode has in store for us.