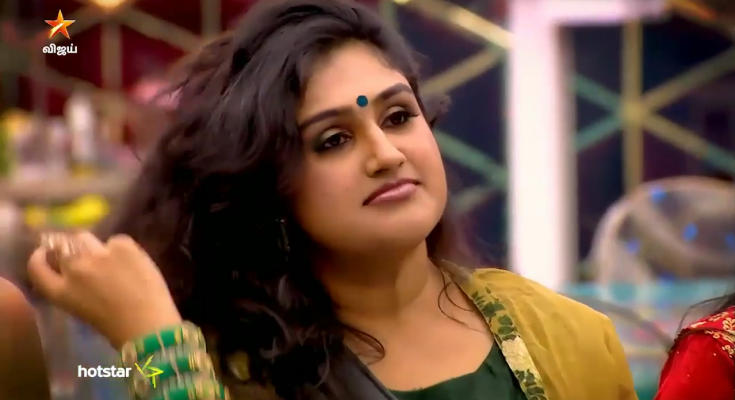 “Expect the unexpected” should really be the name of today’s Bigg Boss season 3 episode. Housemates meet the host Kamalhasan this Sunday to know who is leaving the house.

At first, Kamal deals with Tharshan and Meera. The misunderstanding between the two about who advanced whom on a romantic advance. Both of them denies each other notion and stands against each other.

Kamal lets the housemates know who get to be saved one by one through many interesting ways. And it comes down to it’s either Vanitha or Meera. While Vanitha is being considered the tough contestant in the house, the result comes as a bombshell. Vanitha is being evicted from the house this week. And like for most of us, the result is shocking to the contestant herself. Her friends Sakshi, Sherin and Reshma seem broken by the result. Mohan sobs sadly as he has already started to miss her. Vanitha, who puts on a brave face, consoles her crying friends. She leaves the house heavy-heartedly even when she says she is okay.

She comes out and meets Kamal and the audiences, still in shock from the outcome. Kamal makes an interesting take to send off the contestant. Vanitha sits among the audience and listens to the housemates criticize the result. Reshma’s remarks dotes her Vanitha’s heart closely. Reshma instills in everyone’s heart that how Vanitha is one of the most courageous women she knows, lives as a single role model to her kids alone in this society.

Vanitha, who is being brave once again, talks to those who lives a similar tough life just as she is. She advises them not to be stagnant because their life is full of problems, advises them to move on and inspire the people who depends on them in this world. Inside the house, Abi who was distant from her friends, finds her way back to them and draws close now.

As the toughest contestant, Vanitha, leaves the house, the competition among the contestants, now, seem less intense as there is very less room for any controversies now. The ongoing issue is in the house between Tharshan and Meera. We will know how things turn out tomorrow.