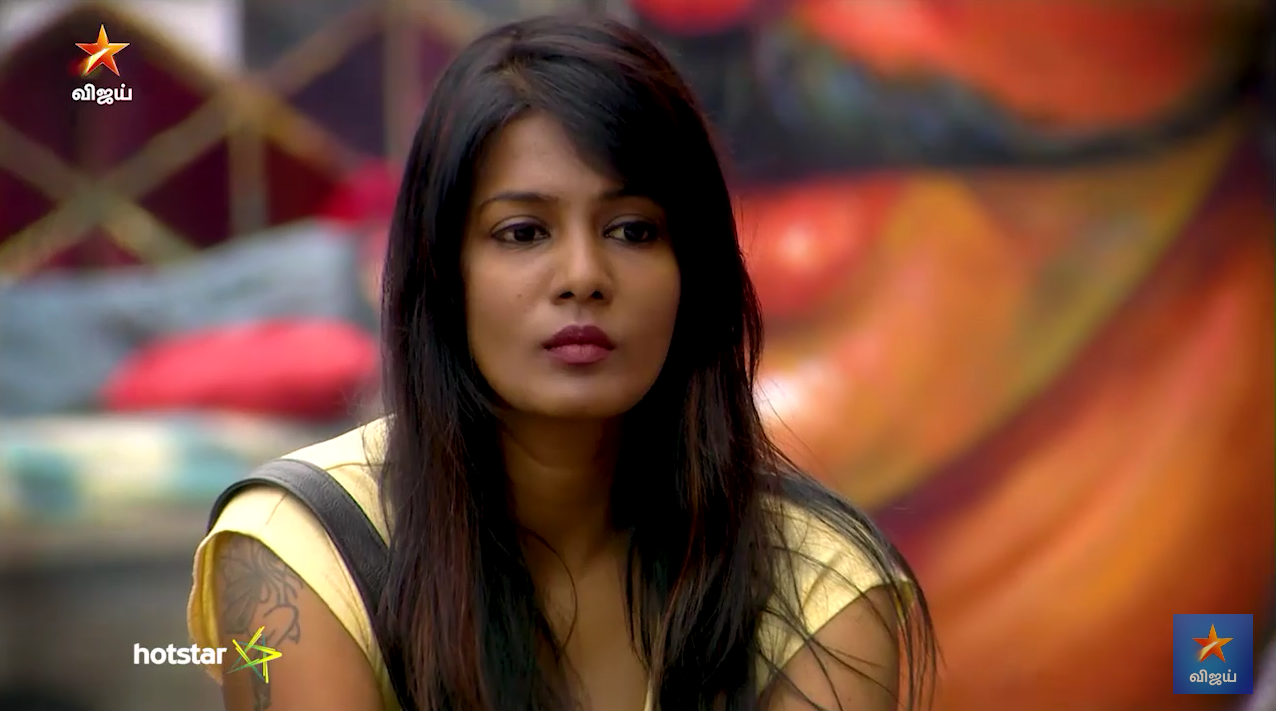 As the housemates bounce back from Vanitha’s eviction last Sunday, they quickly turn towards to take care each others problems. The story of Tharshan and Meera still confuses most of the housemates on whose comments to believe. Mohan is hurt due to Saravanan’s certain innuendo towards his mannerisms. Mohan feels that his dignity is not in place in the house. Housemates come together and consoles him. Saravanan confronts Mohan and clarifies that his intention is different and this is a misunderstanding. But Mohan doesn’t seem to agree with him.

Madhu, the captain of cooking team, chops the vegetables at her own pace. Saravanan, who is at her heels, hurries her to finish off the work to serve lunch on time. And Saravanan tells that he could replace her as she doesn’t cooperate. Madhu is hurt and feels insulted. While she is being consoled, Saravanan tells Madhu that he doesn’t mean what he says and brings her back to the form.

Eviction nomination is made today. Meera garners the majority of votes (hates) in the house. Mohan, Saravanan, Meera, Abirami and Cheran are in this week’s nomination. Though Abirami takes the news with a smiling face, she reflects upon what her doings could have possibly made her to be nominated and weeps over the fact. Mugen gives her shoulder to cry on in the moment of her unhappiness.

Housemates are given a task to name two people who they like and dislike with a reason. Most of the contestants name Meera as the person dislike. Kavin puts it gently that she has issues with others and she tries to sort them out too. He advises her that it would be better if she is ready to listen to her criticism. Abirami names Mugen as the person she is blessed with in the house. Meera says something to the contestants for all the hates that are being thrown at her. She perceives that she is being troubled because she is the toughest competitor here. She would like to think that others want to dominate her to prevent her winning. She says she just takes this as a competitive sportive event and will play the same game.

We have a sweet moment today when Saravanan is showed his kid’s picture who he has been missing since the day one. He is a man who doesn’t wear his heart on the sleeve. A man of few words who doesn’t explicitly show that he is emotional. But he is indeed processing all those emotions silently. It wells up the house today. As Meera is being hated the most now, which she knows very well, she is ready to face the challenges and will not seem to go down without a fight.

What if the boundaries hit by two teams were also equal after Super Over tie?