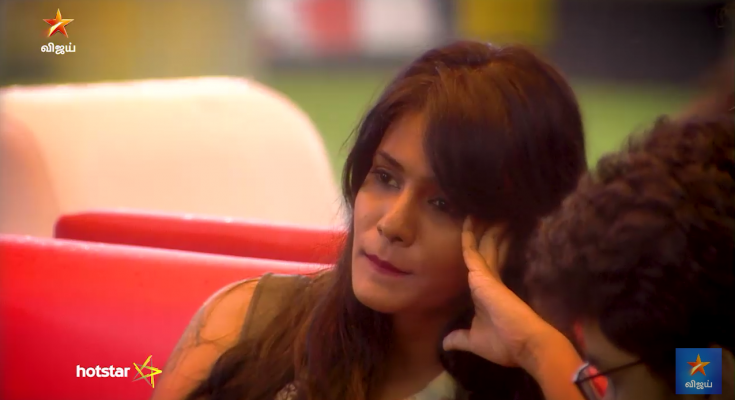 It seems the housemates try too hard to sustain a problem in the house at any cost. Mohan Vaithya lets the Captain Sakshi know that he is not much of a help to fulfill his responsibility with Bathroom cleaning chores as Cheran completes all the works by leaving none to Vaithya. He asks Sakshi to assign him with cooking team. Saravanan is in the cooking team and as Mohan and Saravanan are not in good terms. Sakshi feels that he could be with Vessel washing team. As this news emerges to others, Reshma and Abirami discusses themselves and ask Mohan that in her earlier captaincy, he said he couldn’t bear the work load in vessel washing team. They hear that he volunteers himself once again to the team to which he said he never wants to come. Mohan clarifies them that he asked only to join cooking team but because of Saravanan, Sakshi assigns him to vessel washing team with less work load. Mohan has a talk with Sakshi alone that how Abirami and Reshma misled the things they discussed. They confront each other with each of their opinion and end the problem.

Kavin gave his chocolate to Losliya few days before to console her. Sherin finds the chocolates Losliya has collected so far and asks who gave them. Sakshi misunderstands that Kavin gave the chocolate she gave him to her and this hurts Sakshi’s feelings. Losliya, who is also hurt by the remarks, gives back the chocolate to Kavin. The triangular bond between them seem to be broken over a chocolate. Losliya is hurt and cries on Cheran’s shoulder which shakes him a bit too.

Luxury task of the week is played by Sandy and Meera and that ends up in a issue that hurts so many in the house. Kavin comically says that Sandy could have completed the task a lot quicker if Meera has not been hampering him. Meera feels insulted and wants to establish that she is equally a part of the task as much as Sandy is. She doesn’t like Sandy getting all the glory for her contribution too. Since she is hurt, Kavin consoles Meera that he doesn’t intend to say the way she understood. He apologies and believes that the issue is resolved. Reshma, who is listenting to all the problems, talks about the same to Sakshi. Sakshi, as a Captain, goes to Meera and helps her in a way she can. Since the issue is between Meera, Sandy and Kavin, Sakshi decides to let the talk the things out. Meera still feels that her complete effort is not established to others and audiences. She wants to establish to everyone in the house. Sakshi arranges for a meeting and let Meera say what she has to say. Kavin, who apologised already, is confused by this formal meeting to address an already completed issue. Kavin is hurt that Meera still brings up the issue even when he apologised. Meera tries to clear up with Kavin that she did not initiate the meeting and it was Sakshi who did. Sakshi denies that she arranged the meeting only because Meera wants to establish her contribution. Now the people, who came to help her, turn away from her and thinks helping her js mistake. Meera is found to be confined to her bed and crying while others go to sleep.