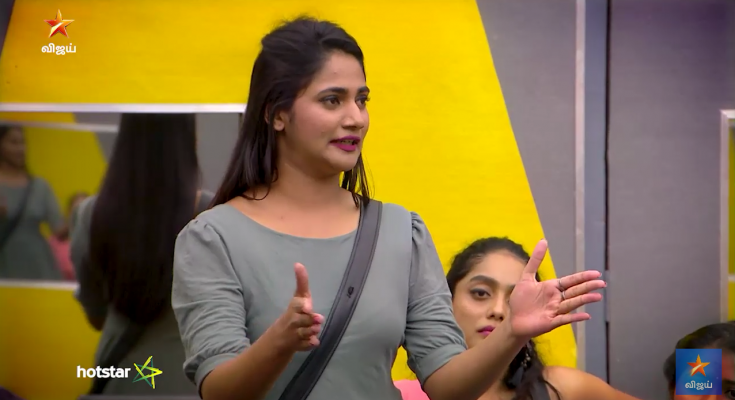 25 days into the house and the spirit of the game is just kicking in the Bigg Boss house this week. Sandy composes a comical farewell song for Mohan along with Tharshan and Kavin. Mugen and Abirami spar over the perception they see each other in the relationship. The news on Losliya getting hurt yesterday spiral the house and Sakshi and Sherin talk alone in the smoking area about how they feel that Losliya put up an act to get the attention on her side.

Luxury task is at its end part today. Abirami and Kavin, who as a team, couldn’t gain any luxury points to the house as the task is difficult to complete in the given duration. Sakshi and Tharshan end up given the same zero result.

The housemates are given a task to divide and debate over 3 topics for which Meera is the host. They talk on the topic that cleaning activity in the house is at its perfection vs cleaning activity is just a facade to hide their untidiness. They talk on the next topic which is the relationship between people in the house is just friendship vs something beyond friendship. Losliya and Kavin lock horn over the argument. Losliya says that the relationship is itself is not clearly conveyed by who are involved in it. Kavin denies it and registers that it is nothing beyond friendship. On the other side, Mugen acknowledges that what is between Abirami and him is friendship whereas Abirami says it is more than that and hurt by Mugen’s remarks. They proceed to talk on the next topic which is the audiences like to see the contestants to be eloquent vs they would like to see them inarticulate in the game.

After the debates are over, the parties who are involved in the argument find time for themselves to talk about it. Abirami feels that Mugen doesn’t have to utter how he perceives the relationship with her while she talks against his conception. She lets him know that it hurts her in front of the others. Losliya and Kavin talk about the elephant in the room now. Losliya let Kavin know that she had no idea that Sakshi and him had a talk about addressing their relationship outside the house which makes her feel like a homewrecker between Sakshi and him. Sakshi still feels that Kavin sides with Losliya because she has created a fan base outside. Sakshi confronts Kavin that if there is nothing special to feel over whatever he said about addressing the relationship out of the house and gets her answer which she has been afraid to hear. Kavin says he doesn’t look at her special and she is the friend he sees in everybody. Hence Sakshi decides to get out of his way. A little spark is enough to bring down a dense forest which is the case with Today’s Bigg Boss house. Luxury tasks are completed with today. They have 2 more days together before they meet the host Kamal and get the unpleasant news about the eviction.