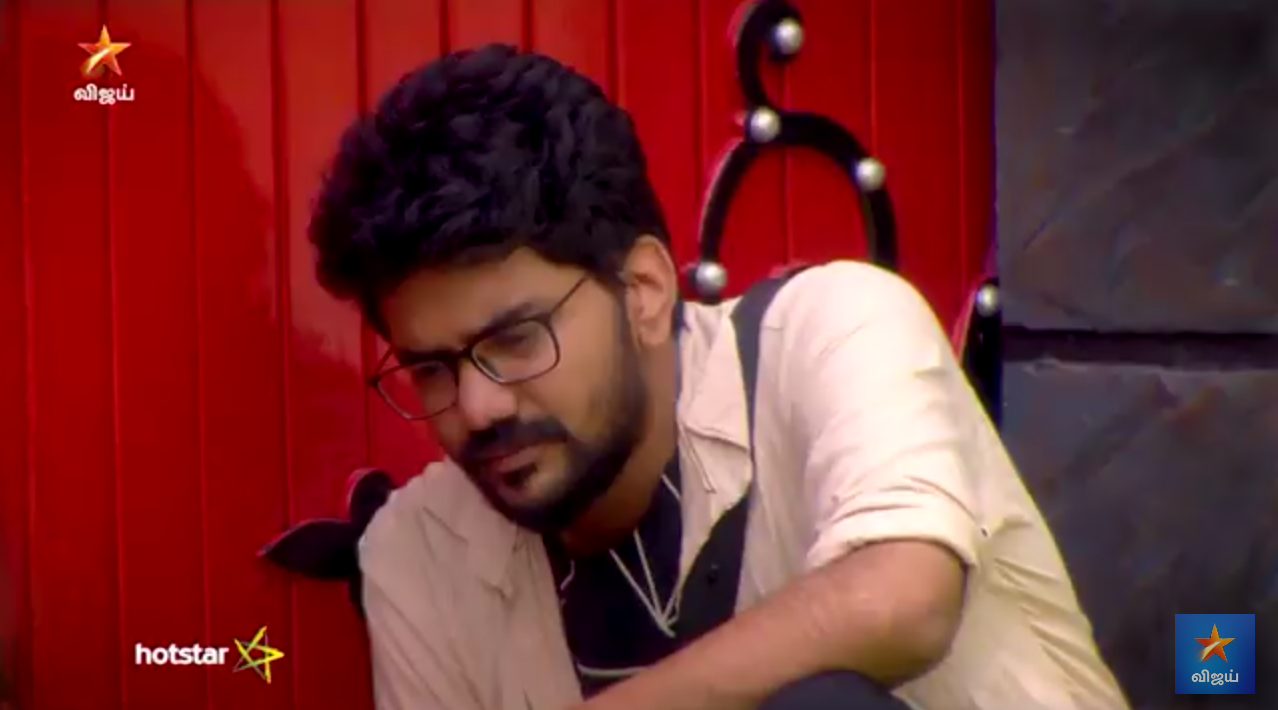 Today’s episode is a prolongation of the situation in the house from yesterday. Sakshi and Meera argues over the issue of who initiated the meeting in the house to let everyone know of what happened in the task room with Meera and Sandy. This argument inside the jail puts heavy stress on Sakshi as she couldn’t bear it. She starts to laugh in stress and ends up crying. She has Sherin, Cheran and Reshma there, outside the bars, to console her from the other side. Losliya and Sakshi start to exchange the thoughts on their heartbreaks. Sakshi holds up strong and Losliya too. Losliya just realizes how deep Kavin and Sakshi relationship was. She feels responsible for the breakage. She gives her two cents on the issue and tells Sakshi to talk with Kavin to sort out the issue.

Losliya and Sherin have a talk too about the issue of knifing a heart chappathi which really got Sherin’s nerve. She feels what she could have possibly done to deserve such a treatment from Losliya. Losliya says she doesn’t mean to hurt her and she says it was a playful thing. Losliya also adds she would react to people how they talk with her. So that hurts Sherin and she loses her cool. Losliya means to say that she doesn’t keep a distance from people based on their experience. But it conveys in the sense she treated Sherin like this, so Sherin must have not in Losliya’s good book.

Sakshi and Kavin have a talk in the night when others fall asleep. Sakshi says she is not ready to get hurt again. Kavin and Sakshi express their true emotion in the process of letting this thing over. The night hushes heavy-heartedly and the morning blooms. Sakshi and Meera are released from jail. The house routine continues. Cheran shares his wisdom to Kavin on his issue. Cheran says that it was wrong of Kavin to give the impression of hope to two women at the same time. Cheran adds that it would clear the judging clouds of other housemates to avoid the behind-the-back talks if Kavin affirms that he doesn’t shape his actions intentionally. Sandy doesn’t agree with Cheran’s idea and he lets Kavin know that. Sandy says it is unnecessary to talk about this to everyone in the house. Sandy says it is only needed to clear out the issue with the concerned parties.

Kavin proceeds to tell this to the housemates and they graciously accepts his explanation and says no hard feelings. But Kavin breaks down once he moves away from others. He bawls over the unbearable heartbreak and feels sorry for his soul.

While he is in there crying, Sherin breaks down too over Losliya’s the insensitive action that tears up her feelings. Sherin is hurt for why would Losliya behaves like this with her when she hasn’t reciprocated the animosity.

Once Kavin finishes his sobbing, Losliya checks up on him and wishes to say a few words before ending her friendship. Losliya is disappointed and infuriated to know Kavin gave such a hope to Sakshi and leaves it abrupt to start a new friendship with herself. She doesn’t understand the “why” part. She just lets Kavin know that playing with someone’s feeling is not a game. She couldn’t get her mind around Kavin’s ideology of treating Losliya and Sakshi equally. She hurts him more by adding that it is all a game to him and she says she couldn’t believe what he says even now as this could have been one of his strategies. Kavin is deeply hurt as they end the conversation.

Kavin tells Bigg Boss that he is done playing the game and he wants to go out of the house. Sakshi and Sherin tries to talk him out of the idea. Sherin tells him not to escape from the problem and tells him to stay and fix it while Kavin couldn’t able to find the spirit to continue the game. They meet the host Kamalhasan tomorrow. Let us wait and see how he tries to sort the issues among the housemates.