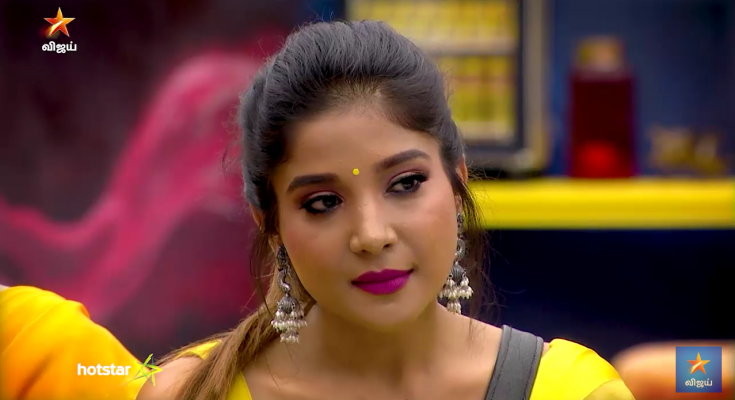 Bigg Boss 3 contestants meet the host Kamal today and they get the clarity they wanted through out the week. Kavin was in the verge of leaving the house yesterday. We don’t see any trace of that in today’s episode. Reshma wins the task and wins the captaincy. The housemates celebrates Sakshi’s birthday with the warm wishes from her home. We see Mohan pulls off the classic movements to the song “I am a disco dancer..”

The housemates are ready to meet Kamal this morning. He clarifies the confusion that Meera and Sakshi have by showing them a “Short film”. It is clear to the house now that Sakshi is the one who initiated the meeting which kinda embarrasses Sakshi for the moment how the way it conveyed. He also talks with Losliya on her knifing action with a heart chapathi and asks for a reason. She said it was because of Tharshan. But Kamal and the viewers think that it could be an act of vent out due to her issue with Kavin.

Kamal then deals with Kavin and let him say what he has in mind. Sakshi too voices out what she thinks about the relationship. Kamal understands the nature of the situation which is wafer thin fragile. So he decides not to interfere more with human’s emotion.

Almost at the end of today’s episode, Kamal talks about the people who are in this week’s eviction. Abirami, Cheran, Mohan, Saravanan and Meera. But Kamal leaves them and the viewers in suspense. He doesn’t reveal who is saved this week. We will know the answer tomorrow.