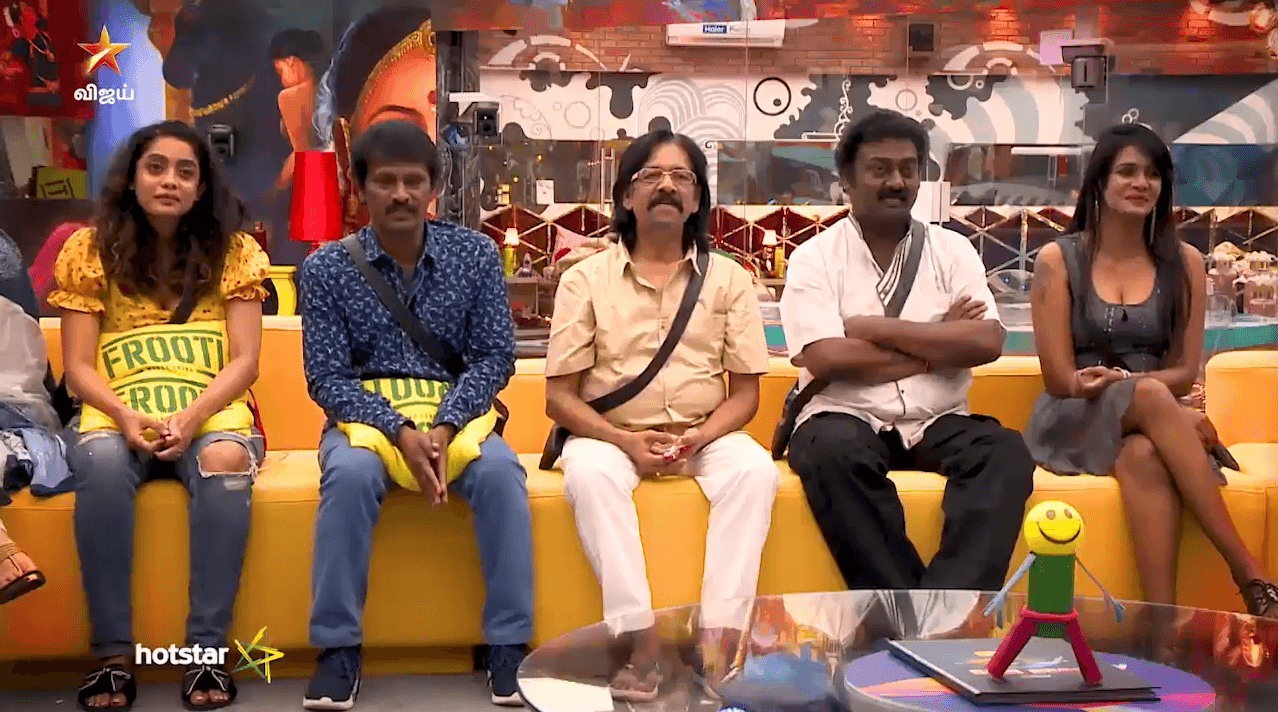 This is the fourth weekend of Bigg Boss season 3 Tamil and the house has to let go the 3rd person out of the house from its 15 contestants. Kamal gives a monologue as a message to people who thinks and advises Kamal not to be a part of a show like Bigg Boss which could reduce intellectual level. He affirms that he is good where he is snd would like stay that way, stay among the ordinary.

We see Abirami who seems broken when reflecting upon the fact that she is nominated for eviction when she doesn’t know how could have she hurt anybody intentionally. Mugen and others try to keep her mind of it.
The housemates meets Kamal with a tensed atmosphere. Kamal asks the contestants to say what issues they have with Meera as she is frequently nominated with majority of votes from the house. They give their two cents that Meera doesn’t have much tolerance towards others. Meera counters their comments with her own to let them know that their perception of her could be different from each other but she just expect them to accept her as she is which would solve the problems.

Meera has a caller from public who asks her that she finds issues with the chores in the house and she is asked if it is because she doesn’t like to work. Meera says she is doing her part pefetctly and she can’t be expected to pick others slack too. Reshma has a caller who analogise and compares with Senthil (as a sidekick for some) and she is expected to show some individuality (like Vadivelu). She doesn’t understand the analogy and just answers it generally.

Another interesting yet intensifying game that is directed at the contestants from Kamal. Each of them is given a comment about them that was talked behind each of theirs back and asked to guess who could have commented about them like that. He lets Meera know that she is saved among the 5 nominated people. And then Kamal lets Abirami know that she is saved too. Abirami seems extremely relieved and broken down to the news. Kamal informs Saravanan too that he is saved. Now it has come down to Cheran and Mohan. The house is a bit tensed.

Mohan is not happy with Sandy and Kavin as they never once mentioned his name when they were asked who they would like to save from eviction. He is disappointed with them and thinks that they are just using Mohan as a comical caricature. Sandy and Kavin are hurt by such remarks and try to comfort Mohan that they don’t mean to hurt him.

After letting the housemates suffer in tension for a bit longer, Kamal breaks the silence and let them know that Mohan Vaithya is leaving the house. Mohan, a naturally sensitive person, breaks down to the news. It pains him more because he has to leave the new family he has got there. The thought of leaving them hurts him more. He dials down his disappointment with Sandy and Kavin in a little while and bids a proper farewell with each and every one of the contestants. He takes his moments slowly and sadly leaves the house.

Mohan meets Kamal outside on the stage and looks back the moments he had in the house. He is happy that he has got such good friends. He describes every one in one line and compares each of them to a book and difficult to read. He bids goodbye once again to the house and audience. He leaves the stage with his authentic swag.

The house is sad after Mohan’s departure. Sandy and Kavin try to lighten up the mood again. Mohan advises everyone to start the next day in the house as a new day and bury whatever the hatchet they are holding onto. A truly remarkable man who wears his sensitivity on his sleeve proudly and doesn’t doubt himself for it. The house surely misses him.