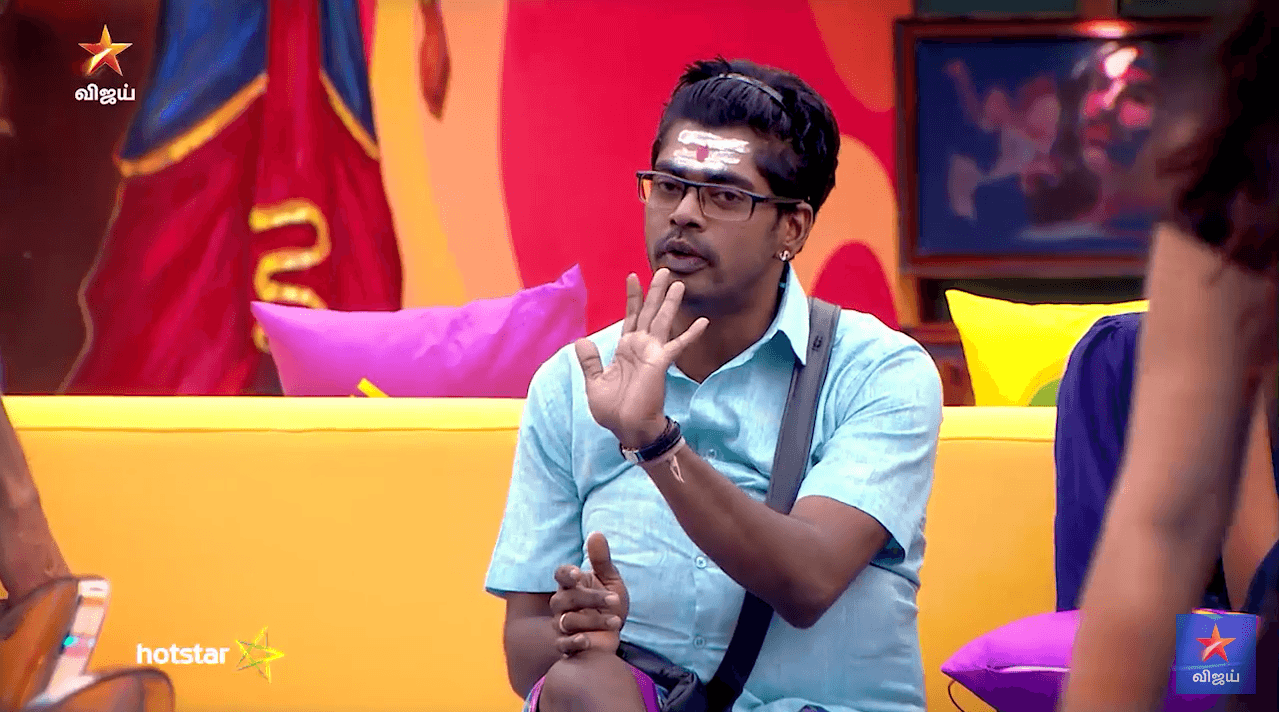 For the last 2 seasons of Bigg Boss Tamil, we have not seen contestants feels the sorrow for their fellow contestants who leave the house on eviction night after the moment of its happening. But we see today how someone’s departure who is very dear to their hearts, could cause some lasting impression. Mohan Vaithya has surely left his impression on the housemates, especially on Sandy. Sandy indulges in the recollection of the past events in the house which involved Mohan with his personal belongings and keeps the house entertaining.

Contestants nominate the people for the next week’s eviction. Due to the trials and tribulations that the housemates went through the last week, it, all, reflects in today’s nomination. Sakshi, Kavin, Meera, Saravanan, Cheran, Abirami are nominated this week and are about to face the next eviction.

Reshma, who is the captain of the house this week, is warned by Bigg Boss for people sleeping in daytime even after severely instructed not to do so. Reshma loses her cool and seems tensed to bear the burden of captaincy. Saravanan remembers Mohan and talks for him as Mohan considered this house as his own and the housemates as his family while each of them has a real family out of the house.

Losliya apologises to Kavin for talking to him harshly the other day. And they make peace with each other. Losliya expresses her disappointment over Sakshi for why she didn’t talk to the former about the issue with Kavin that Sakshi thinks that Kavin sides with Losliya just because of her fan base. And Sakshi answers sensibly that it would have ended up as an ugly thing if Losliya has had any real feelings towards Kavin. It ended sort of smoothly because Losliya doesn’t feel that way towards Kavin. (but Does she?)

Sandy, Sakshi and Tharshan have fun with the knifing chapathi event and turns it into a comedy thing. Sandy puts on Mohan’s accessories and acts like Mohan in the house to fill the void he left behind. Housemates totally enjoy that and we do too. Contestants are given a task to dedicate a song or a dialogue to one of them and that is fun for a while.

When Losliya and Mugen spends time singing and dancing, Mugen playfully compares her with one of Vadivelu’s song and his actions in a song. Losliya takes it seriously and tells Mugen that it is not cool to mock someone’s action or impression in any derogatory way whereas Mugen doesn’t have such intention and hurts by her remarks. They talk this out and comes to an understanding.