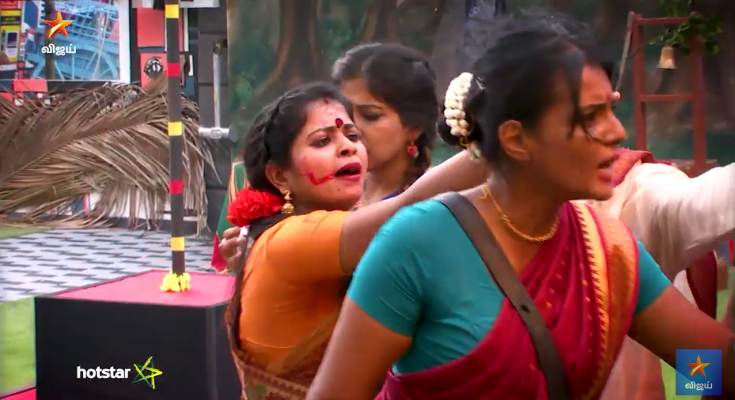 A fun evening turns into a fight in the morning at the Bigg Boss house today. As much as the bubbling fun the house saw yesterday, it sees its another extreme today as it begins.

Meera and Losliya decorates the entrance of the house with a pretty coloured kolam, with a tagline Varuga, Varuga (Welcome). Sandy, who finds for ways to mess with Meera, messes the line and transcript to read Vandhi (Vomit). This infuriates Meera and she gathers the panchayat to listen to her complaint. While Madhumitha and Cheran, the two leaders of the teams, deal with the complaint, mischievous Losliya steals Cheran, the naataamai’s Sombu and hides it. Due to her lack of stealth mode, she gets caught by Cheran but she keeps denying the “allegation”. She is tied to a chair under the Sun by Cheran to retrieve his belonging. Cheran, who is into the character, talks rudely to affirm his position as the leader of the team to everyone. The contestants seem a little taken aback by his attitude and couldn’t distinguish if he is into the character and taking out on others personally. Everybody thinks that but Reshma is the one who acts on it. She pounce back at cheran verbally for raising his voice against her when she is not part of the mistake.

Meera and Madhu lock horns for a while as Meera puts forward her impolite opinion on how Madhu should act like the leader of her team. This triggers Madhu and a little tension between the two.

Among the chaos, Cheran feels that it is difficult to balance who he is in real and who he is in the character. He feels he is mistakenly perceived as a brusque and an impatient person. Reshma confronts Cheran for raising his voice against her and tells him that it hurts her. Cheran tries to explain that he is in his character and does what he is required to do. For which, Reshma doesn’t care to lend her ears and stands on the point, which she thinks, is right.

Madhu is given a task by the other team to dance with tooth paste drawn on her face. She insists that it might cause her skin allergy and yet she is asked to do so by Sakshi and Sandy. She is asked to dance even when she is unwell physically. Sandy keeps mocking her height and doesn’t consider her mentioning on the tooth paste irritation on her face. He keeps mocking that too. Madhu loses her cool and shouts at every one of them in the house. All the frustrations that she has suppressed so far has exploded on Sandy. Sandy wonders how he is blamed for the task alone when it is from the team side. He waits for Madhu to cool down to tell his apology.

Madhu tells that Sandy doesn’t have the tolerance when he is being mocked but that doesn’t get in the way for him to mock others. She talks about how Sandy’s mocking hurt Mohan Vaithya in the past days of the house and everything Sandy has been practising. For the first time in the house, Sandy gets the blame for being who he is and it corners him very well. Kavin, Sakshi, Losliya, Sherin, Reshma, Cheran come together to console Madhu. She cools down in a while and listens to Sandy’s apology patiently. She tells him not to hurt or mock anyone for the way who they are. The house attains a calmness after the thunderous roar of Madhu. Kavin, Meera, Saravanan and Sandy talk about what happened in the house today and thinks it could be Madhu’s breaking point or it could be her plan all along to drag down Sandy. Saravanan, whose mind is untouched by all these disorders, spends his time thinking about his wives and his son. The task will continue tomorrow too and we are yet to see who breaks and gets broken.