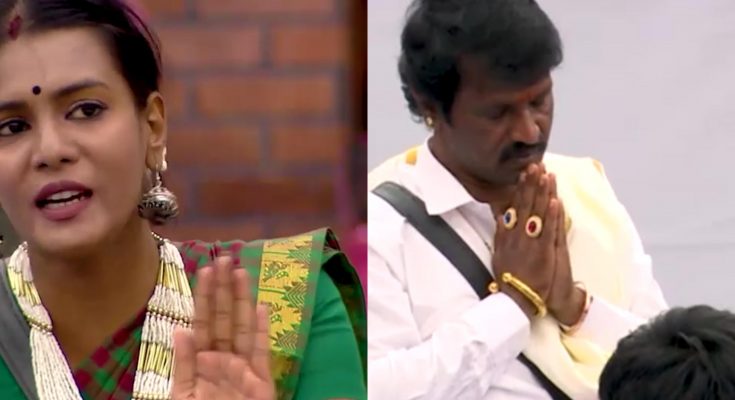 With all the #MeToo cloud that tumbles us on day to day basis, Bigg Boss house too traces on that pathway and makes us introspect on how we perceive all the things we see.

Bigg Boss house begins just like every other day without having a slight hint of what is going to happen today. The contestants get into their respective characters and begin the task. Saravanan suggests a play to the housemates that Cheran and Madhumitha, the two leaders of their teams, are actually a couple in the past, who part their ways to lead to two teams in their life to accomplish something. They have a child Losliya together and the contestants find ways to join their paths.

When it’s all going on the fun track, it comes as a shock wave when Meera accuses Cheran that he man-handles her roughly during the task. Losliya, who is being her mischievous self, tries to steal something during the task and gets caught. When most of the ladies are after her to retrieve what she stole, Cheran, who also comes after her to prove she is the thief who has been stealing all along. In that attempt, Cheran unintentionally handles Meera roughly. This affects Meera and she tells it in front of everyone.

She accuses Cheran that he harbours the grudge towards her and hence he doesn’t act humanly towards her. Cheran, who is completely taken aback to this accusation” admits that he forcefully did the action but he says it was not intentional. Meera, who says that she is not in good terms with Cheran, thinks that most of the contestants take Cheran’s side because she is mostly the cause of the problems in the house.

Saravanan, who is a friend of Meera, more than a friend to Cheran, talks in favour of him and tries to make Meera understand that it was not intentional. No one tells Meera that she should not have brought it up and just tells the way she said portrayed Cheran under a wrong light. Cheran breaks down emotionally to this accusation. He is completely over the edge and tells everyone that he wishes to leave the house. His imagination goes wild and he has a reason to do so. It pains him to face his family and friends after this infliction. Housemates stand with him firmly that he is not such a person and people know about it.

Meera is affected and she is just the same who don’t listen to any other opinion if it is not hers. She doesn’t think that the housemates care about her and tells that they are being different it is because it is happened to her and not to any other girl in the house. Sakshi, Sherin reaffirm Cheran’s lost belief that they know how he genuine he is and Meera’s words portray it otherwise.

Cheran’s hope is restored by the housemates and tells him to wait for Kamal’s view and the audiences’ judgment on this issue. He is shaken but he keeps himself strong as the day ends. The two rivals, the teams come together for the cause of Thiruvizha, a communal celebration and is united forever. Even though the house has seen the state of tumult today, it ends on a happy note as the day ends. They have got one more day to the weekend before they meet the host Kamal and gets their complaints and issues resolved. It raises the tension to know how the housemates are gonna face each other for one more day due to the delicate situation in the house. Let’s wait and watch how it happens.