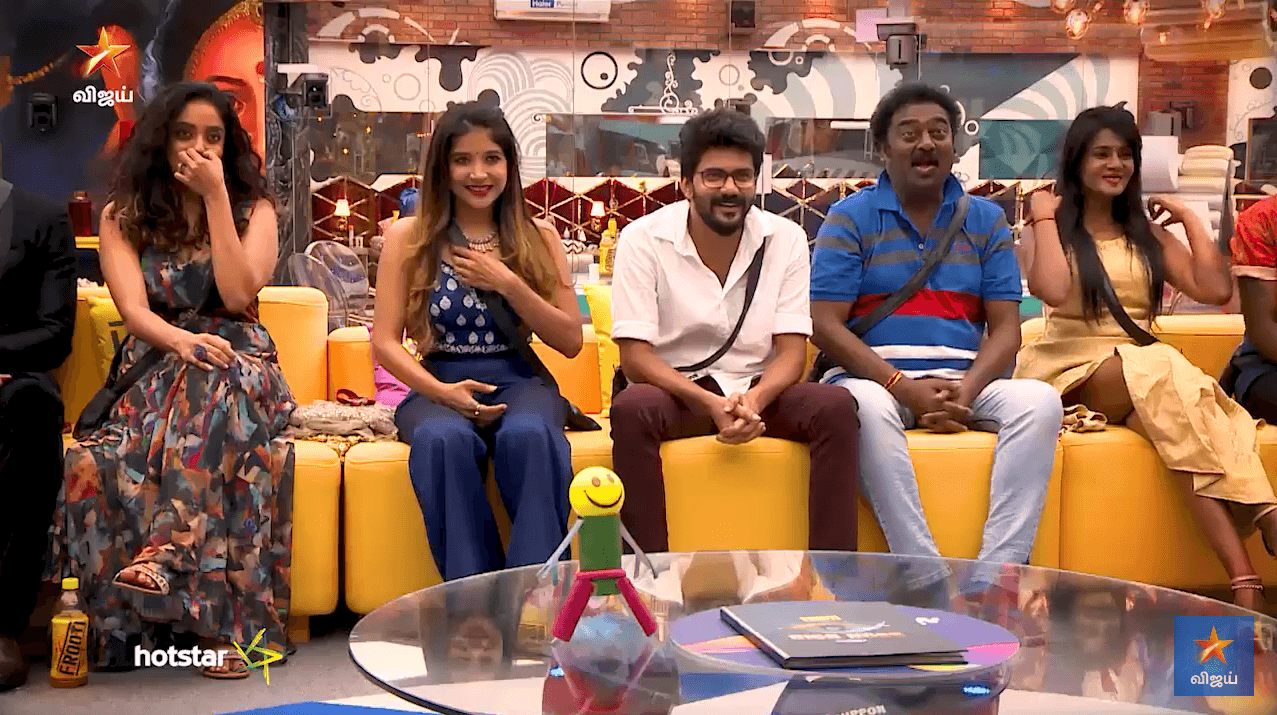 Today’s episode of Bigg Boss offers a simple yet a complete closure. Kamal doesn’t try to elevate the tension and brings the episode to an apt ending. We see Meera talks with Sandy about what Kamal pointed out yesterday. She accepts that it might have hurt Cheran but doesn’t give in her fidelity. She affirms that what she felt wasn’t something she could brush off slightly in a game but in a more real sense she sort of accepts that it wasn’t intentional.

The housemates, who awaits for the news, meet Kamal. Kamal asks Abirami and Sakshi the reason for their consecutive nominations. They have no clue what is wrong from their end and have the will to find it out and correct it. Saravanan, who is in his usual carefree attitude and yet concerns to see his wives and child, tells Kamal that he either wants to go out or wishes to see his family.

Kamal tells them who gets saved from eviction. Without elevating the tension, he names Kavin and Saravanan. Now it comes to the ladies Sakshi, Abirami and Meera. Abirami doesn’t want to leave the house yet and says playfully that she might have to stay in the house stubbornly if the result doesn’t come in her favour. In that such a warm, balmy moment, Kamal reveals that Meera is getting out of the house this week. Even the housemates couldn’t believe that the result is out just like that, in a very simple manner, when usually such a situation will be a tempest in a teapot.

Meera bids goodbye to the contestants and packs up her stuffs to leave. She is undaunted as always. The men come together to help her get together emotionally and give her their support to face the situation bravely. She leaves the house gracefully which is evident from her one last swirling dance movement with Sandy. Meera, even when she is drawing to the near end, darts a remark at Cheran that he has won in his challenge that she gets to leave before him. Not many of them are ready to miss her. Madhu, Cheran and Reshma discuss about how this matter left Cheran to gain his dignity. Cheran doesn’t hate Meera for her mistake but the ladies underline her enactment of the event with Sandy doesn’t put her on the good light.

Sakshi is still in a confused state that the result is out in an undramatic manner and believes that she could be retained in a secret room. Madhu believes it too. Meera comes out and meets Kamal personally for the first time as her entry to the house was a bit lateral. She is wisely advised to take the goodness from the house. She is presented with a lovely compilation of her video and bids goodbye again to the housemates from the outside.

After sending off Meera, the contestants play a board game with Kamal to choose their Hero, Zero and Villain in the house. Tharshan comes out as the lovely villain whom the housemates fear that they will lose to his strength and charm. Cheran comes out as the Hero who gained the respect of the housemates. Losliya is the only lady who is given the Hero title by her father figure Cheran. The task ends and Kamal wishes them best to continue the game harmlessely with their best efforts.

After Kamal leaves, we peek into the house to know their state. They feel the void though Meera’s presence troubled them in one or the other way. They were occupied by her. Now they feel that they are left in a vaccum state. Sakshi inquires Kavin that why Losliya isn’t talking to her attentively. Kavin doesn’t have a clue to know why but he just adds the substance, which doesn’t seem intuitive, that Losliya might be off as Kavin won the task between him and Sandy. His statement from his imagination doesn’t seem to come with a valid reason and yet Kavin says Losliya might have thought that the genuineness was not maintained. But it does trigger Sakshi’s anger.

Reshma, Sakshi and Sherin find changes in Losliya’s behaviour and feels that she is a bit rude. They feel she is not how she used to be a gentle, bubbly girl who entered the house. They just look at the “hardback” and doesn’t make the effort to “read between the lines”.

Sakshi shares a moment with Abirami to tell her that Abirami might be wasting to moments to showcase her talents and overshadowing Mugen’s talents and gives her two cents to get Abirami on the track that to utilize the opportunity at the best level. It doesn’t offend Abirami. She takes these advises positively and tells Mugen that it’s time for to take the steering. She tells the same to Losliya too. Losliya is off mentally and does some things which puts lights on her hidden anger. She pains herself and finds ways to inflict the pain more and more. Losliya listens to Abirami’s words. Abirami points out that it’s not easy to gather TN’s fans support and advises her to become energise with it and get into her best self. It is a very healthy conversations between the young contestants who has to compete each other and they are doing it in a very admirable manner.