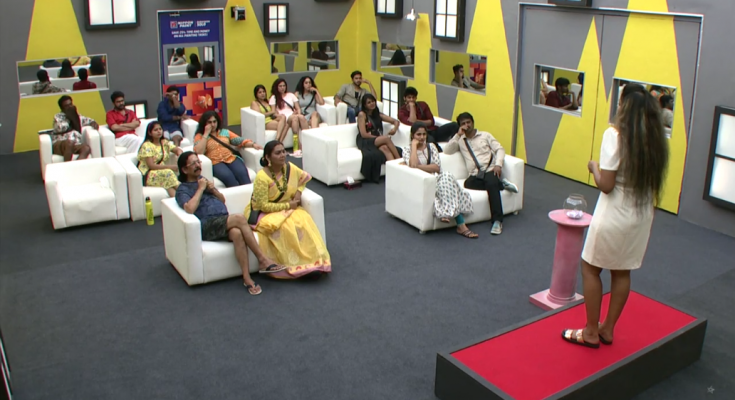 The traumatic experiences of Mohan and Reshma leaves the housemates grief-stricken.

It is Day 3 into the house leaving the introduction day and we are slowly getting to know more about each housemate. The hostility, that was showed towards Meera by Abirami gets burst out today and they both are ready to lock horns over uncalled dispute.

Vanitha gets jumped into the clash voluntarily and to make a point vehemently that personal vendetta is not allowed into the house. But she takes on Abirami side discretely and singles out here while making tasteless remarks on Meera and makes a judgement on her character.

Meera and Abirami break down and are both trying to justify that they are just right where they stand unapologetically. Today’s task is about sharing intimate details from the housemates lives in front of the others. Mohan Vaithya, Reshma, Abirami and Sherin get chance to take part. Vaithya and Reshma share their heart-wrenching personal baggage that they have been hauling around through out their lives so far to this point.

While Mohan has already told the housemates about the loss of his wife at his 37 years old, he breaks down today in reliving those painful moments in the task. Reshma shares the most intimate gut-wrenching moments from her past life. She was not educated by her parents and married away at just 18 years old to an abusive man. She has a son with him. After years of suppression, she discloses that she took a stand and got that marriage divorced. She went abroad and educated herself well. She loved and married an American who turned cruel, who she caught cheating on with someone else. He left her when she was 5 months pregnant. She took the battle alone when she gave birth to a 5-month premature baby. She brings these details of her life to light when she has come across as a very strong person to let the world know that how courageous she is to do this all alone. She relives the agonizing moments when she has to share the death of his newborn just after she delivers him. It pains her to know that there is a graveyard for her newborn who she carried for a strenuous 9 months and who is buried six feet under now without having a life of his own.

These traumatic experiences of Mohan and Reshma leaves the housemates grief-stricken. They self-reflect and realize how blessed they are to have a life to show for their own while some have to the sail the hardships to get where they are. Housemates seem considerate of each other’s feelings after going through the painful moments from Vaithya and Reshma and how unimportant are all the fracas for just attention seeking.

To light their soar hearts, Abirami and Sherin share some happy moments from their lives which are entirely chucklesome. The house goes through the roller coaster of emotions, the anger, the pain and the amusement today. Let’s see how long they seem this way and not succumb to their immediate reactions.