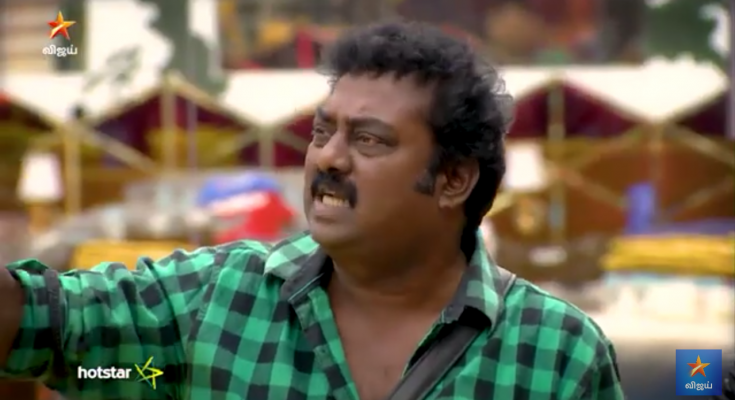 It’s the senior figures in the house who drag out each other today in an argument. Cheran and Saravanan end up fighting today over the issue of who hasn’t taken enough efforts in the luxury task of the week. They point each other of falling to take proper care of the task. Cheran’s opinion on Saravanan, who was in Vijayakanth’s character in the luxury task, is that there wasn’t enough distinctiveness from his real self. Cheran puts forth these opinions when Sandy said that the former could have done a better job in showcasing Rajini’s traits. Cheran, who did enough in his strength to fulfill his efforts, is taken aback by those comments and asks everyone to analyze who gets to go to jail for worst performance. He feels that he is cornered when it comes to naming him as a better performer every week. He feels that he is not encouraged for his efforts.

Saravanan takes it to his heart when Cheran pointed out the former didn’t do a good job in the task. He reciprocates the opinion rashly. And he flies off the handle and talks disrespectfully who is usually a man of few words, who has learnt to suppress his anger.

Cheran is offended by that and walks out of the place. It comes to know that Saravanan has been harbouring a personal baggage against Cheran for few years which is finally tapped on today.

The house divides and takes sides with Cheran and Saravanan. While some feel the justice is with Cheran, others feels it with Saravanan too. Since the housemates couldn’t come to a conclusion on the worst performers, Tharshan is asked to decide by Bigg Boss to choose in his strength. He chooses Losliya and Sherin as the worst performers of the task and they get to leave for jail.

Losliya, who actually gave out an excellent dance performance, is heartbroken by the decision. She had just gone through such an emotional rollercoaster since yesterday. And this decision has done some more pressing. Sherin takes the decision whole-heartedly. Madhu, who have grown fond of the elders in the house, bawls like a child when Saravanan and Cheran argue with each other. She feels that the guiding lights of the house themselves changes their course on a ego clash.

It’s time to choose the captain of the house for next week from the best performers of the tasks. Sandy, Madhu and Mugen are chosen. They compete each other for the captaincy. In the competition, Madhu gets hurt physically. Her nose bleeds as Sandy’s elbow hit her. Sandy gives away the game and let Madhu and Mugen compete each other. Abirami isn’t cool with sacrificing in a game. Madhu tries her best to play the game until it’s very end. When the men in the house helps Madhu in a way they could as this physical task is cakewalk for Mugen and not for Madhu, the women of the house doesn’t agree with the support. In the end, it us Mugen who wins the captaincy and gets to share as much frooti as he wants with the housemates.

Among other chaos, the boys find the fun inside it. They Losliya tries to deal with the situation inside the jail as Abirami and Kavin are there for her to give shoulders. She tries to process the happenings in the house calmly. The ego clash between Saravanan and Cheran is just in halt. And there are other feuds in the house that are left unsolved. Kamal meets the contestants tomorrow. We may see how wise he would guide them in their course.