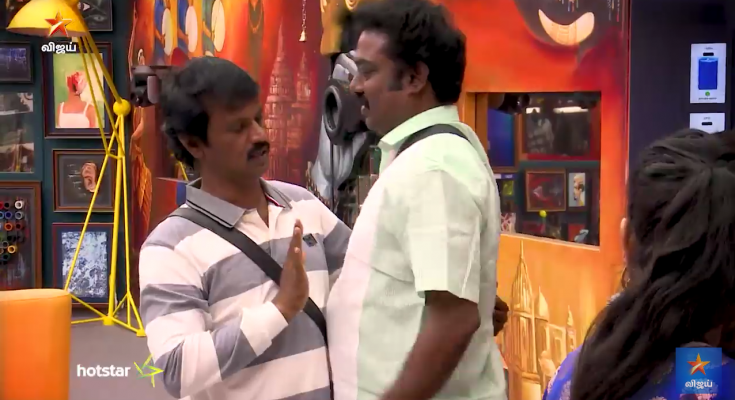 For over a week, we have been watching the Bigg Boss contestants keep engaging with conflicts with themselves. Especially, Sakshi and Kavin keep lock horns with each other over their settled love issue. We badly want them to get over the issue and play this game as intuitively as they could. We want Kamal, the host, to deliver what the audiences feel about that. And this episode turns out to be a sensible one with Kamal’s wise advise to change the course of the game into fun-filled one.

We peek into the house to know what happened on Friday. Losliya and Sherin are give jail task to manually grind rice flour in old fashion way. Mugen, the captain of the house this week, assigns the household chores team. Losliya and Sherin completes their punishment and gets out of the jail. Sherin eats the food from the house after 3 times plain meal in jail, yearns for a tasty food and couldn’t eat it even when she wishes.

There is an interesting Centerfresh segment that takes place among men in the house to find the Mr. Confident among them. Men are asked to take up the task and confidently and let the woman know in the house who they like. Sandy encounters Reshma in a comical way and engage in a fake phone call with Losliya to flirt with her, maintaining his bachelor profile. Mugen gives his apple/potato fake heart to Abirami, stands on one knee and partly wins her heart by singing “Mun Dhinam Paarthene..” song. Tharshan wins Sherin’s heart and and Mr. Confident title. He shares his first love encounter back in his school days that set the house in hilarious mode. Tharshan also lets the audience know through the bigg boss camera that Sherin is a good friend and wishes to continue this friendship for lifelong.

Contestants meets Kamal and astonishes at his moustache free face which is for his next projects Indian 2 and Thalaivan Irukkiraan has started. Kamal starts the issue from open nomination that happened in the week. It trembled the contestants to openly nominate their acquaintances. Sandy is asked why he hesitated so much to tell the truth that he knows. And Reshma’s first time nomination makes her anxious too. Losliya, who has been to jail more than once, seems to be away from the spirit of the game. Kamal asks the housemates the reason for nominating majorly Madhumitha and Kavin. Most of the contestants seem to wish to change their decision for nominations. Mugen regrets nominating Reshma and Abirami wish to retrieve her nomination on Kavin.

Kamal stirs the flare between Cheran and Saravanan over their issue of ego clash. Kamal advises Saravanan that no one has the rights to disrespect or take advantage of anyone unless we that permission to do so. And he mentions the elders’ fight in the house, whom the other contestants look up to, shake their mental strength. Saravanan admits his mistakes and reconcile with Cheran.

Kamal comes back to the story of Kavin and Sakshi. They decide not to stir up the ceased matter and decides to handle the things more matured hereafter. Kamal applauds Sherin for her wise and clear cut advise to Sakshi. He states that he could see the impact of the advice in Sakshi’s answers.

Sherin and others consider that this issue overshadow others places in the game and distracts their concentration.

For Sakshi’s uncertainty on her healing period and process, Kamal takes Reshma as an example. Reshma, who has lost her child and visits the grave of the child every year in America. She has mentioned the incident only once in the house and never used that as an excuse whenever she is down. Kamal advises Sakshi that there can’t be a faster healing process than this house. What doesn’t kill you, makes you only stronger. Even if Sakshi has to look at Kavin every day, Kamal says that’s the only way to heal faster. He advises her to focus on others in the house to grow out of the confusion and hurt. He also points out that they take the issue as an armour only during eviction nominations.

Kamal appreciates everyone’s participation in the luxury task game. He points out the performances of Mugen and Madhu which was striking and lauds their participatory spirits. He advises Losliya to come forward in the game as her mind seems to be off from the situations. Now Kamal deals with nominated people and asks others to save one of them. Reshma and Abirami get two votes each and Madhu, Kavin and Sakshi get each one vote. He let the contestants know that Madhumitha is saved from the eviction. We will know the state of others tomorrow. The contestants seem hopeful and get over the harbouring grudge that’s hampering their minds’ function. We will know more tomorrow if they stick to the great man’s advice or not. We will know who gets to leave the Bigg Boss house tomorrow.