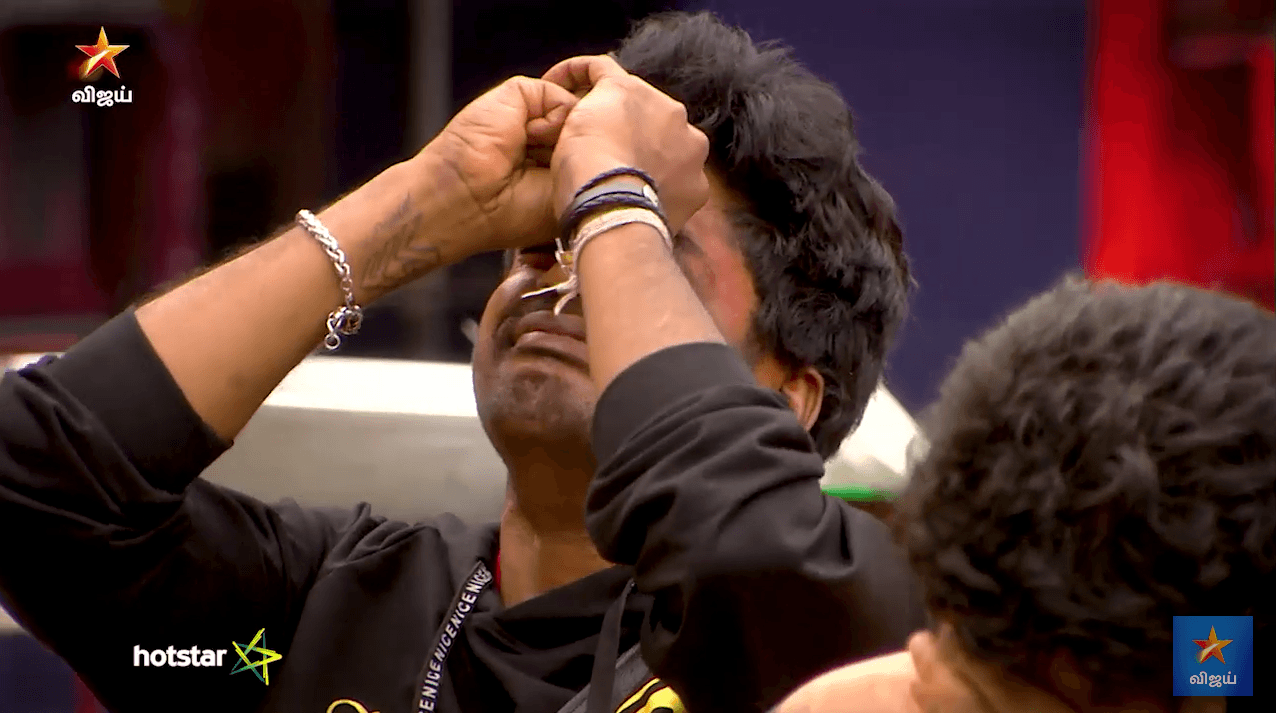 We saw Saravanan leave the Bigg Boss house in yesterday’s episode. We get to know that it is a clip from today’s episode. We see the portions of the house events before Saravanan’s exclusion happens. As the day begins, We see captain Mugen hearing and acknowledging complaints from the housemates. They decide to cautiously play this week’s luxury task to note down who performs well and who isn’t. Madhu mentions that some play a safe game by telling everyone do well in the game. This hits Abirami as she was the one who sided with both Cheran and Saravanan. She explains Madhu that she isn’t playing a safe game and it has to be meticulously done to capture everyone’s performance which is not an easy work. Madhu counters that they are the one with the power to send the non-performers to jail and she feels it needs the effort to make a correct judgement. Mugen, who sees this thinks that as some sort of argument, tries to calm the two parties. Abirami, who is slightly offended by it, leaves the place stone-faced which is easily read by Mugen. Mugen still struggles to get his anger under control, tries to have a smooth conversation with Abirami and her tears only agitates his anger. He manages to calm her down and wish her to play well in today’s task.

Sandy, who sits with Kavin, calls Sherin by their side while she is talking with Sakshi. Sakshi, who seems to be hypersensitive over anything, feels snubbed over this. Sakshi’s only friend in the house is Sherin. And when she feels that Sherin is being cut off from her, Sakshi feels deserted. She has to learn to be stronger and shielded from such friction. And she is hurt more when Sandy and Kavin sing songs which seems to be pinning down the people in the house figuratively. It is fun for them but Sakshi, who struggles to deal with broken heart, feels sensitive over it. Sherin comes at her side to console her.

Today, housemates play a task to collect the coins with points that are thrown at them by Bigg Boss team. They have to collect and save it. They can steal it from other contestants too. The winner is who has got as many points as they could. Sandy, Saravanan and Tharshan secure the places in that mentioned order. The winner can’t be nominated for eviction in the next week. Saravanan gives his suitcase to Sandy and Kavin to hide the collected coins safely by them. They are overwhelmed by the gesture. They decide to give all their points to Saravanan to save him from nomination when he successfully crosses this week’s hurdle. As they speak, Saravanan is called to the Confession room and we saw the rest yesterday.

Sandy and Kavin begin to suspect that something is fishy as Saravanan hasn’t come back to the house. Bigg Boss called the housemates to living area and informs that Saravanan has left the house due to unavoidable circumstances. The news unbearably hit them hard. Sandy, Kavin and Madhumitha break down as they hear the news. Their imaginations go wild. They are terrified because they worry it has something to do with his kid or family members. They couldn’t indulge in composed thinking. They sweat and lose their patience. By seeing their struggle, Bigg Boss tells them it has nothing to do with his family and they will get to know further information on Saturday.

The house is silent as the grave. Everybody is affected by the news one way or the other. Even, Abirami, Sakshi and many who weren’t close with Saravanan feel the void. They talk about the ways how Saravanan’s care and concern and his presence affected them. Kavin and Sandy are at a loss of words. It is like losing a limb for them. Cheran tries to elevate their mental strength. He assures to be there to prevent them from breaking down.

As the housemates have lost a friend today, Bigg Boss gives them a task to talk about their friend in life who they know who always stand by them. Sandy, Kavin and Cheran dedicate it Saravanan as they see him as a person who is worthy of earning their friendship and for who they are grateful to get as a friend. Sherin and Abirami, who grew up as lonely kids, dedicate it their mom who took care of their happiness and sorrows alone without a better half in their life. Madhu dedicates to actress Nalini who helped her greatly when it comes to her work and personal issues. It was Nalini who made sure Madhu married a guy she loves without any familial issues. She feels grateful to her forever. Mugen, Losliya and Tharshan, each remember the friends in their lives, who stood by them when they are right and made sure to point out and correct them when they are wrong.

As the housemates turn in for the night, they still feel heavy heartedly with Saravanan’s absence. They will gradually learn to deal with it as the days pass. They must be biding their restlessly to meet Kamal this week to know what happened with Saravanan’s situation. We will know more tomorrow.

One person who never broke my heart: Abhirami about Losliya