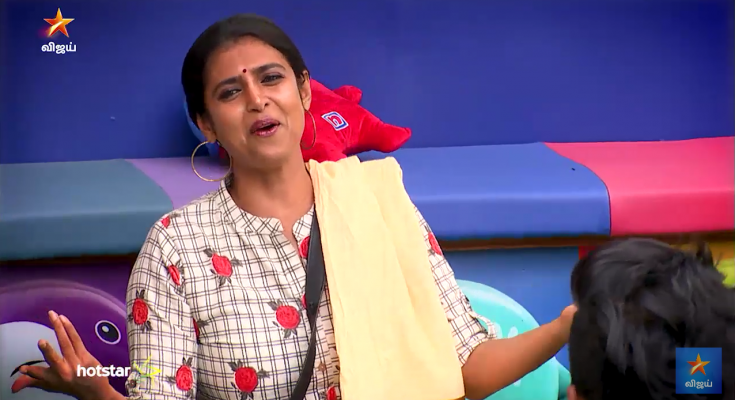 It’s yet another day in Bigg Boss house where contestants walk on eggshells among each other. Each comment that they pass on at one another seems to be laying foundation for one more conflict in the house.

The day begins as usual and Kasthuri sings the status of the housemates as a “villu paattu”, an ancient Tamil musical, and digs fun in it spontaneously. Kasthuri questions Kavin that how the idea of flirting with 4 girls at once seemed like a fun strategy in the house to get a positive attention from audience. She posed a sensible question that a woman is slut-shamed for flirting with more than one man at once but when a man does it, the society name it fun. Kavin realizes the question and his mistake.

The housemates gain their luxury points for the week and encounters a reduction in it for breaking the “No English” rule in the house. And with the remaining points, they list their luxury groceries. As always, Madhumita is anxious when choosing the groceries within the given points. She once had lost the entire points to the house when her list crossed the house budget. It might add on to her pressure to get it right this time. But her anxiousness infect other people and distract them too. When Madhu said she is anxious because, Kasthuri, who writes the list of items on the board, seems to be doing it composedly. Kasthuri points the gun reversed on Madhu and says it’s Madhu’s job to tell the items and Kasthuri would write it. She doesn’t have to worry about Kasthuri missing to write them, as she only has to worry about her job.

It’s time to choose the next captain of the house. Sandy, Cheran and Losliya compete each other for captaincy. They are asked to paint a huge canvas with different colour paints that has given to the participants. The one, who is abke to cover most part of the canvas, is the winner. While Losliya is filling up the canvas roughly around the edge, Sandy and Cheran starts to cover up the canvas with big splash. At the end, the two colors are smudged together and Sandy’s colour dominates. Kasthuri, who is the judge of this task, announces Sandy as the winner. Cheran seems disappointed. Kasthuri, later tells Cheran, that she doesn’t intend to side with Sandy as the decision favours him. Cheran tells her there is no need to apologize for doing her job as a judge. Cheran was nominated for most of the eviction weeks. He thought it would help him in a one way or another that he being the captain. Kasthuri says she has left that thought of his nominations while doing her decision. Kasthuri let Madhu and Cheran know about her struggles with her child and her dealings with insomnia which leaves Madhu in tears.

Sandy, who becomes the captain of the house, leaves everyone in splits with his fun riots in the house. The housemates play a task as 2 teams which is conducted by RKG ghee. Both teams chefs are Kasthuri and Tharshan. Kasthuri’s team fails to make sweet pongal which is the task. While Tharshan’s team succeeds in making a delicious dish. Madhu is the judge of this task. Madhu doesn’t seem to be an impartial judge as she doesn’t help Kasthuri’s team while she gives pointers to Tharshan’s team but not in a way to give them a edge. But at the end, Cheran and Kasthuri say Madhu’s impartiality couldn’t be brushed off easily. Tharshan’s winning team celebrates with sweet box. Sandy makes fun of their half cooked dish which infuriates Abirami. Madhu doesn’t reveal one team’s mistake to another but she doesn’t stand up for herself too.

The contestants play truth or dare. Kasthuri asks Kavin how feels about his image while he leaves the house. Kavin admits that he has done some mistakes in the house. He assures that he won’t do them again. He is positive that he holds a good image after he starts realizing his mistakes. Abirami is asked to give a farewell speech to Mugen. She gives a moving speech that touches everyone’s heart. Madhu is asked to hug and kiss all the ladies in the house. Cheran gives a one line truth about everyone in the house which the housemates take it as a wise advise. Kasthuri has a talk with Tharshan about his thoughts on the game and how he and others see him as a prospective winner. One more day to go to the weekend for the contestants to meet the host Kamal with a new housemate, who has presumed judgements on each of them. Let’s see what this week brings. Let’s see who gets to be saved and who gets to leave the house or who gets to have the chance to use the secret room in the house.