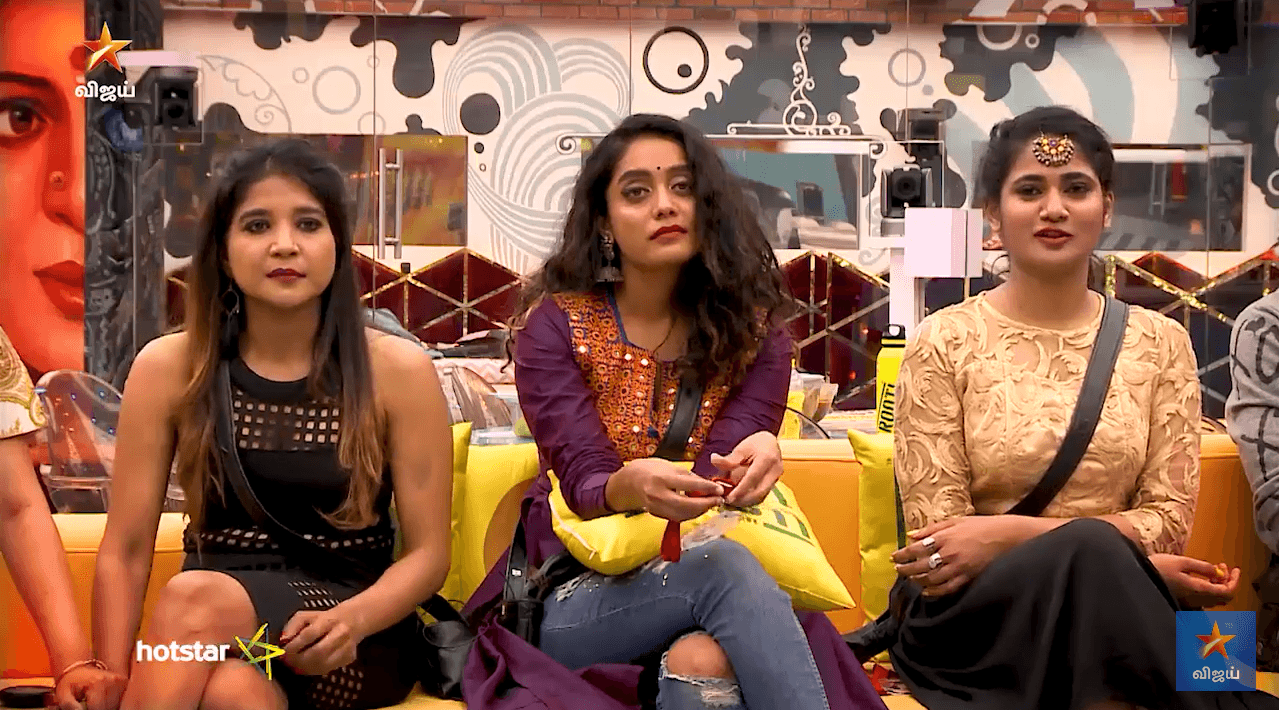 Bigg Boss season 3 has reached half the distance of its race. The contestants have reached 50th day in the house. Kamal congratulates them and applaud them for their efforts. The frooti caller of the week asks Madhumitha that she is not outspoken as she used to be in the beginning. She is asked if it is because she started compromise. Madhumitha counters the remarks and says she is still the same and has the will to rise to the occasion. Kamal asks the housemates who they think, would reach the finals and secure the first 3 places. The housemates vote to Tharshan for his devotion, Sandy for his ability to humour and Madhumitha for her straightforwardness in that order. They yield the Gold, Silver and Bronze medal and they get to take it to home. This event boosts their confidence as they have reached the 50th day. Kamal indicates that this order don’t need to be permanent. Kasthuri remarks that their opinions can be a facade as she has seen the confession room talks which gives her the edge over the others. It allows her to analyze their true thought process.

Kamal jumps to the eviction announcement. He has denoted that certain friendship in the house is unchanged over the course through many ups and downs. He mentions Sandy-Kavin and Mugen-Tharshan friendship is visible. Mugen, who is from Malaysia, Tharshan and Losliya , who are from Srilanka, get to garner the pride for their country and community. They assures they will compete sincerely for it. Whereas, the friendship among the women, is reorienting from time to time. Kamal announces that Losliya is the contestant who gets to be saved this week. Sandy and Kavin have prepared the farewell songs for the nominated contestants Sakshi, Abirami and Losliya which leave the contestants in splits. After a small break, leaving Abirami and Sakshi in tension filled suspense, Kamal announces who gets to leave the house. Kamal pulls a prank that he already announced the result but the housemates didn’t hear it to elevate their suspense. He then shows the card it is Sakshi who leaves the house this weekend.

Sakshi bids goodbye to everyone in the house. Sherin and Abirami burst into tears as she leaves. Sakshi tells Tharshan that it hurt her when he commented that she is taking advantage of Sherin. Sakshi, who seems emotionally stable and strong, strengthen the people who cries for her departure. She gracefully leaves the house with her own swag. Sakshi joins Kamal on the stage. She wears her confidence effortlessly in front of the audience and her father. Sakshi gets to relive the early moments in the house through a memorable AV from Bigg Boss team. She is unshaken and steady. Her father assures her he is proud of her on her every step of the life. And it allows her to handle situations like this in a family. Sakshi gets to see the contestants for one last time from stage. She wishes everybody to do and play well. Kavin apologizes to her and her father for which her father politely brushes that there is no apology required in the game. Sakshi has reached the maturity that she wouldn’t have changed anything in the past if she gets a chance. She gains the life lessons and experiences from the Bigg Boss house. Kamal wishes her that this exposure would help her to boost her carrer. It all ends well and Sakshi walks out of the stage. Kamal bids goodbye too.

Inside the house, we see, Abirami and Sherin are anxious to face the next week’s nomination. Both of them tell each other that they have an edge not to leave the house any soon. Sandy, Kavin and Tharshan comment on Abirami’s break down when Sakshi was about to leave the house. They think Abirami is being dramatic and wearing a facade always. Madhu comments that Sakshi didn’t shed a tear for leaving her friends and she is unsure about her thought process. Cheran seems to be offended by Sandy-Kavin’s comical song in which they have a verse which said Cheran’s sermon are dreadfully boring. Cheran asks Sandy that not to degrade someone in front of a national television as this would set up an image for the people. His wise advises would go unnoticed because it was labelled as a boring sermon. Cheran indicates that he never really advised to someone who is not ready to take it up. So, Sandy had no reason to mark his talking as boring. It hurts him. Cheran tells Sandy to inform this to Kavin too. He says he has never showed off that he is a director.

Sandy tells this to Kavin how it makes feel Cheran. Kavin counters this to Sandy that his way of offending is itself showing off as a director. Losliya tells Kavin and Sandy that it is wrong of them to mock only him like that. Kavin apologise to Cheran and smooth thinks of with him. Kavin and others feel that Mugen is wasting his opportunity in the house by staying back with Abirami. After today, Mugen and Abirami talk that they are not going to be in the way of each other and only helps to go upwards in the game. Tharshan and Sherin talk about why he would comment at Sakshi in a hurtful way. Tharshan says Sakshi has not let the limelight to fall on Sherin. Sherin also admits that if Sakshi remained in the house, it would have split them and ended up in a fight for his comment.