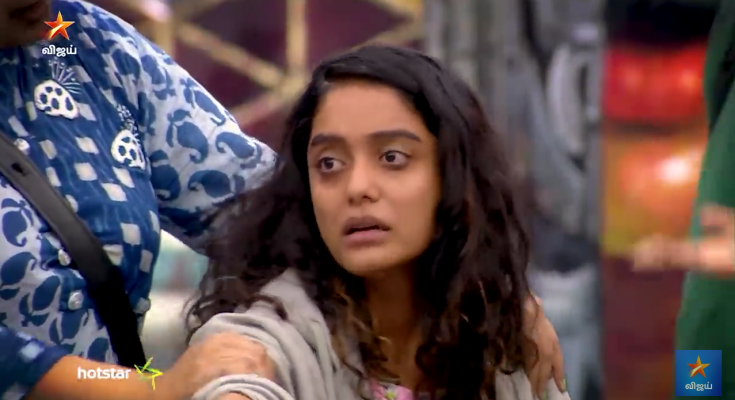 Vanitha is back in the Bigg Boss and that is assured by the riot in the house today. Abirami is now concerned by her portrayal outside the house, to the audience. She feels ashamed that the entire blame is on her for hindering Mugen’s growth in the house and her emotionally unstable characteristics burden her more. Vanitha points out all this. Vanitha tells Cheran too who is not enraged towards the unfairness in the house where he needs to be. Sherin and Vanitha advise Abirami not to fall for a guy who doesn’t value her affection. She tells her to concentrate on her career and exposure and not spend the time crying. Abirami tells she forced no one to be with her but she realizes that her unconditional love isn’t valued.

Abirami and Mugen issue is talked in front of the housemates today which explode to the roof. Abirami is concerned that it is portrayed as she has been hindering Mugen’s growth. But she feels broken that Mugen, her valued friend, didn’t stand for her. She feels terrible that Mugen didn’t deny those accusation. When she asked this to Mugen in front of everyone, Mugen tells that it didn’t strike him at the time to clarify to Kamal and the audience. Mugen adds on that he couldn’t judge Abirami’s emotional stability as it keeps fluctuating week on week. This shatters Abirami as she didn’t expect that sort of answer from her friend, Mugen. Abirami feels degraded in this situation and when she points out to Mugen, they both lose their composure. It comes to a point where the house has to divide into 2 sides and tackle Abirami and Mugen. Abirami bawls over the issue that she feels like an idiot and this portrays her as a completely different person.

Mugen is calmed by Sandy and Tharshan to control his anger. The hotel task is back. Vanitha tells this has come as an issue because Mugen let it grow. He, who is being an person who struggles to control his anger, doesn’t show his anger when he has to, to Abirami, when she behaves in a way he doesn’t wish. Vanitha tells Mugen is equally responsible in this matter and it is wrong of him for not keeping his distance which now hinders Abirami’s growth. There is a little entertainment bit where Mugen sings love failure song for boys and Losliya sings the same for girls. Vanitha discusses with Sherin and Cheran that Bigg Boss Tamil is the decent version of Bigg Boss in India. She tells this would pivot the course of the show as Cheran, Vanitha and Kasthuri have decided to participate in the show. It changes the future prospect and elevates the quality of the show.

Vanitha tells Sherin and Abirami that Losliya is the silent killer among them. She tells Losliya sides with boys to save herself from eviction. She tells that ladies in the house are emotionally manipulated which gives the boys an edge in the game.