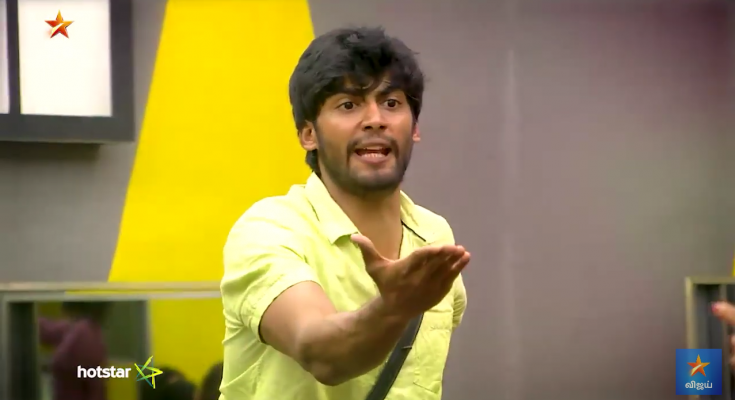 Bigg Boss contestants debate over a topic to know who is best in the house, whether it is the men or the women. It brings the unresolved issues those have been suppressed in the minds of the housemates. The day begins with many conflicts that have come to the light with new faces. Cheran and Madhumitha have started to keep their distances from, the people with who they used to be close, Tharshan and Losliya. The latter duo notices this but don’t seem willing to know the reason for such change. They remain silent. Cheran and Madhu expect Tharshan and Losliya to reach out to them but only get disappointed. They start to picture the love they share doesn’t seem true now.

Vanitha talks about audience’s mind Cheran and Madhu. She says Kavin, Abirami and Mugen are out of the eviction zone and she begins to portray Tharshan as self absorbed person, insensitive person. On the other side, Losliya shares the news with the boys that Vanitha has begun to start a spark in the house. The boys add on that’s what Vanitha is here for. Vanitha criticizes Losliya to Sherin and Cheran that she has got this characterisation to immediately talk back insensitively to the people who talks to her. Vanitha mentions that Losliya has started to peel off her act in the house and arrogance is her trope now.

Abirami doesn’t feel well inside the house jail. Sandy and most of the housemates decides on their own to let Abirami out of the jail while Kasthuri and Cheran says it is wrong to go against Bigg Boss’s order. Sandy is ready to face the consequences for going against Bigg Boss’s orders. In a few minutes, Bigg Boss announces that Abirami’s jail punishment is over and she is out. While Sandy and co talk about how Cheran wasn’t supportive of their decision to let Abirami out, Cheran misunderstands and tells Vanitha and others that they are doing their victory talk. Cheran thinks they are degrading Cheran’s name as Bigg Boss’s order came in their favor.

Housemates’ activity today is to debate over the topic to know who is best in the house, whether it is the women or the men. It brings out all the issues that have been infused in the debate. It brings out Abirami-Mugen issue, accused patriarchy in the house, capacity of Men and women in making difficult decision in the house, Mugen and Tharshan’s inability to take control over their emotions which hinders their captaincy. Cheran loses his cool while putting forth his points, Kasthuri is mocked in an unfriendly manner as it is showed to the audience that the men mock Kasthuri. This has rubbed her wrongly but she hasn’t

Mugen and Abirami talk later the task. Mugen breaks down that it has been portrayed as he has anger issues towards his close friend, Abirami. Given his past which consists of his familial issues, he was hurt due to the fights between his parents. He had encountered his father beat up his mother and that deeply wounded him. Today, when Mugen himself has been portrayed as a person who was ready to beat a girl in the house. It touched a sensitive nerve in him and he shed tears in front of Abirami. Abirami, who is disappointed at Mugen as he didn’t know when he hurt her, is clear now as they talk things out today. Mugen tells he will try to clear Abirami’s name in this saturday.

Kasthuri and Vanitha go head to head today since Vanitha asks her what’s her purpose to be in the house which rubbed Kasthuri in a wrong way. Vanitha shares this with others in the house while Kasthuri observes this from distance. She feels disconnected and unwanted in the house. She hasn’t got a real friendship in the house.