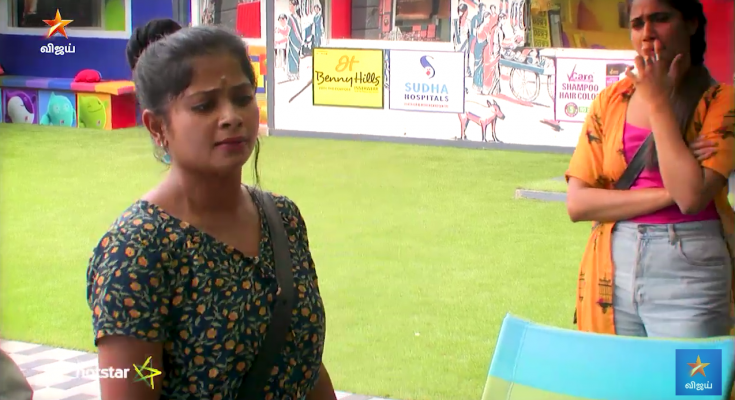 So many hearts are broken today in the Bigg Boss house, they don’t have a way to mend them in anywhere soon. Cheran’s relationship with Losliya is strained and the same is with Madhu’s with Tharshan’s. Cheran tries to mend Tharshan and Madhu’s relationship but it ends up exploding more. Tharshan accuse Madhu that she doesn’t try to consider the opinions of anyone else. He accuses her off that she tries to soil Sandy’s reputation. Madhu puts forth her point to stand for the girls Kavin began to flirt early in the competition. Losliya begins to fight with Madhu as this issue involves her too. Losliya questions Madhu that this hasn’t bothered her all along and it only bothers her now since Vanitha’s arrival. Losliya paint a picture of Madhu as she is trying to show herself to stand for the so called justice for her gain in the game. This explodes the conversation between Madhu and Losliya. Madhu says she has been talking for the ones who have suffered. But this wasn’t heard and it only has been seen as an edge for her in the game. Madhu points out that she has been standing up for all the unfair things that has happened in the house. Kavin is hurt as his problem is being brought up everytime in the house. When the boys and Losliya accuse Madhu that she hasn’t been voicing out for the issues in the house in the recent times. Cheran and Madhu are offended by such accusation. And this expands the crack in the strained relationship between Cheran and Losliya. Kavin and his friends in the house, the boys and Losliya, walks out of the place. Kasthuri, who tries to calm them, follows them to make them understand her point. We have been seeing that the group has been mocking Kasthuri in the recent days, they walk out on her without giving her the least respect. Kasthuri might have been offended by it and infuriates Kavin more while she is walking away. Madhu is advised by Cheran that she has not been explaining her concerns with a clarity. This is not helping in any way to resolve the issues or come to a closure. Madhu doesn’t like the boys who spend all their in the bathroom corridor and it makes her inconvenient. This is also not heard with the concern among the boys.

The boy try to vent their anger and frustration in the house through a comical song. This actually offends Cheran and Madhu while Vanitha, Sherin and Abirami are enjoying. Cheran and Madhu realises that for who she has been standing up for, they themselves are not concerned and supported in the house. Madhu decides not to spend her energy where it is not valued. Vanitha clarifies that she is just enjoying the song without getting offended by it.

Today, the captain for the next week is chosen. Sherin, Madhu and Tharshan. Cheran led Madhu to the finishing line in the task for captaincy. Madhu is the captain of the house in the coming week. This victory seems to put a wide smile on her after being brushed off in the house. Cheran is equally happy. Another fun task in the task is with Helo app. The contestants are asked to say fun things to say to their fan followers in the Helo app. Abirami ingeniously composed a rap-cum-carnatic song that attracts everyone in the house. Cheran, who is the judge of the task, finds this uniqueness correctly and awards her as the winner of the house. Bigg Boss season 3 doesn’t wait till every Friday to come up with the issues. The issues in the house has been building up to the verge and explodes to choose a course on Friday. Kamal will meet the contestants tomorrow. It’s a hope that he would show what is right and what’s not to the housemates. It’s a hope it would change Losliya’s attitude and unnerve to break the hearts which loved her unconditionally.