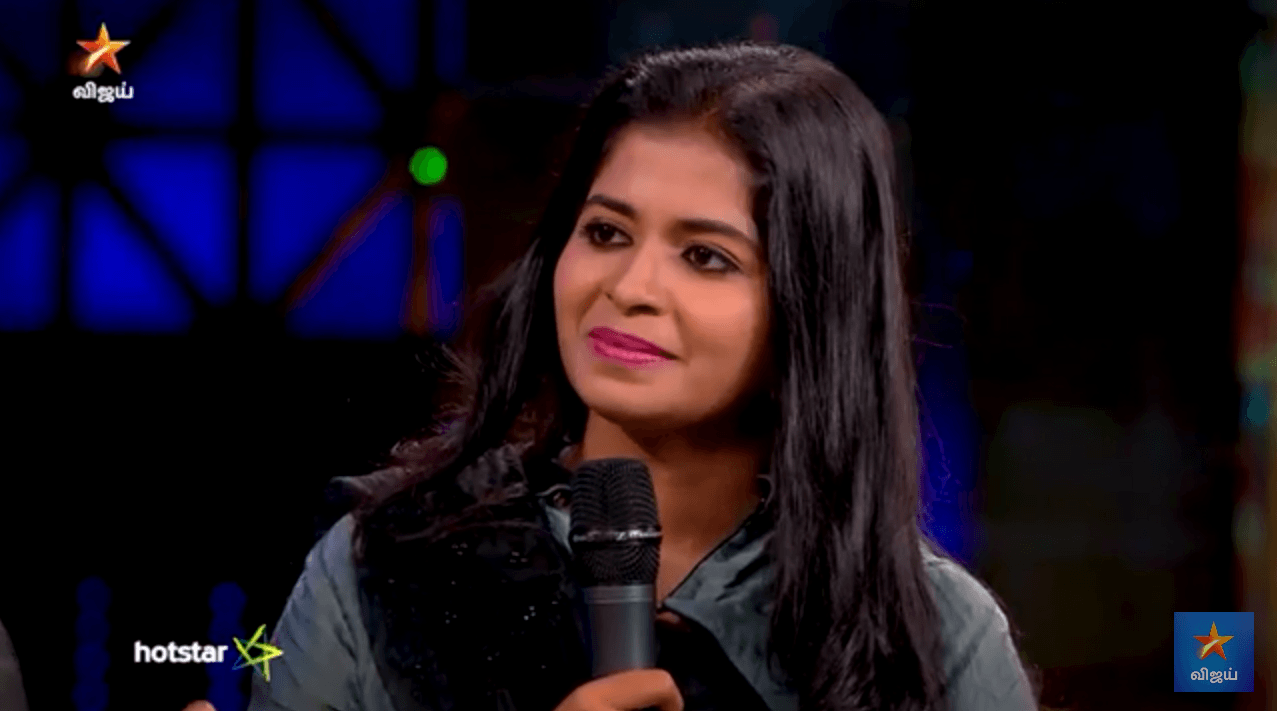 Madhumitha is out of the Bigg Boss house today. She has broken the house rule by harming herself due to an unknown issue in the house. Kamal meets Madhumitha with a heavy heart as she has lost the opportunity to play the game anymore. The issue involved here is not discussed as it might be seen as a wrong role model. Madhu keeps standing on her opinion on what she thinks right. She justifies the harm she did to herself. Kamal likes to argue and provoke with her delicate mind. He advises her and anyone not to decide to harm oneself without thinking about their responsibility in the society. Madhu meets the housemates from the stage and says she only likes to meet Cheran and Kasthuri and no one else. She wishes Cheran and Kasthuri to play the game well. Cheran advises her and counters her opinion that it is wrong of her to harm herself and leaves the game like that. Kasthuri wishes her too. Kamal asks Vanitha if she would like to say something at the moment, Vanitha only says that she is happy to meet Kamal. Kamal is disappointed at her answer as it was a moment to boost Madhu’s morale. Vanitha seems cocky at that moment. Madhu is sent off with warm applause. Vanith justifies her answer by saying that it is because Madhu doesn’t want to talk to any one else.

Kamal asks Losliya and others that why she told Vanitha that she would watch the show once she is out in a harsh tone. Losliya answers that it is not necessary to know what happens outside the house as it wouldn’t change her game strategy. The boys say that they are happy with Vanitha’s arrival and also feels a little rattled. Vanitha defends herself that she is not here to create conflicts between the contestants. She just puts forth her opinion which turns out to be a topic for issue. We peek into the house to know what happens on Friday in the house. The contestants play hershey kisses chocolate task. Vanitha, Sherin and Abirami team wins the task after gabbing a bit. Sherin and Abirami talk about how Tharshan and Sherin’s acquaintance is being perceived. The contestants meet Kamal and are asked how the talk about patriarchy origin in the house. The root is found from Vanitha’s advise to the girls in the house when she returned to the house. She says she only mentioned that there didn’t seem to be an equality in the game between the contestants. Sandy adds on that the game is interesting now despite the issues in the house. Kamal registers that this game is never boys vs girls. It is only personality vs personality. And each of them should play their own game and no one can play on behalf of them. Sherin accepts the point. Abirami – Mugen problem is mildly analyzed and hears what Abirami has to say. Abirami puts forth her point clearly now that she is only hurt because Mugen didn’t stand up for when she did for him all along. She says the issue has come to a closure and it is sorted out. Kamal appreciates Abirami for bringing out her talent in yesterday’s task, when she sung her own swara composition. He advises her to be the same from here onwards.

Kamal perceives each contestants as an equal artist and cares for their welfare. He wishes to embrace Abirami as she thinks inferior of her. She cared too much about people’s perception. Kamal advises her not to as she is the only reflector of herself. Kamal denotes that the housemates shout at each other as crowd which is not clearly conveyed to people to most of the times. Kamal asks why it is always problematic to choose the worst performers of the task. This week, Abirami and Kasthuri went to jail. Kasthuri puts forth her point that Abirami was targeted particularly given the issues in the house. Kamal criticises Sandy not to be only the leader for few favourable in the house. Kamal advises Kavin not to make a closed group in the house and be involved with everyone. Kamal applauds Cheran for performing well in his task and advises him that not to get easily offended by the slightest things in the house when he was mocked. Kamal criticises Cheran for not taking a stand when accusation on patriarchy in the house.

Kasthuri says the boys in the house are hot heads and that needs a control. Kasthuri says it is named as human rights violation when she tries to puts forth her opinion by Kavin. Kavin says Kasthuri talks pointlessly and it irritates him and his friends. Kasthuri says these housemates are not slightly even caring when one of them is hurt mentally or even physically. Vanitha, Sherin and others oppose her opinion as it is not true. It seems Vanitha and Kasthuri try to go head to head whenever they get their chance. Vanitha is keep interrupted by the audience when she tries to talk. She forgets her point what she was gonna say. Kamal says there is eviction this weekend despite Madhumitha’s departure. Kamal bids goodbye to the contestants and audiences until tomorrow.