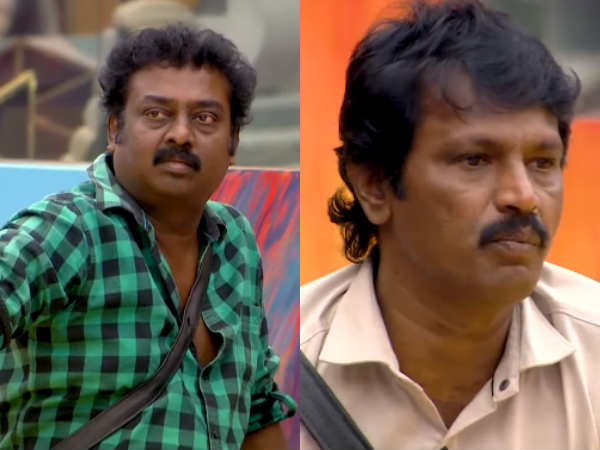 The Day 40 at the Bigg Boss 3 house as usual starts with a song. Then we see Sandy and Saravanan sitting together and pulling everyone’s legs by asking whether tomorrow is Friday. They ask Cheran first and he gives a subtle reply whereas Sherin and Abirami make fun of Saravanan and Sandy.

Minutes later, Kavin goes to Sherin and asks if she can trim his hair and she agrees. We see Sherin trimming Kavin’s hair and Mugen, Tharshan makes fun of the scenes, all four giggles. Saravanan then appreciates Sherin’s work.

Things get serious in the afternoon when Bigg Boss asks the contestants to tell the best and worst performers of ‘podu aatam podu’ round. After voting, contestants select Mugen as the best when it comes to overall works.

Then Bigg Boss asks everyone to select the worst performer who will be sent to the jail. Sandy says that Cheran, though, did up to his potential, did not do justice entirely as Rajinikanth. Cheran says if it’s the opinion of every one he will accept it, adds that he feels bad that his work is not recognised well, asks whether Saravanan did justice to the role for which Saravanan interrupts to say that he looks like Vijaykanth and so he doesn’t need to do much. While many nominate Sakshi, Sherin, Losliya for not living in the character despite dancing well, Cheran, Tharshan’s name come out predominantly. Bigg boss calls Tharshan and asks him to decide because he is the leader. Bigg boss asks Tharshan to pick another contestant and he cannot nominate himself. Argument end after he picks Sherin. What follows was Cheran ask if Saravanan did justice to the character and that did not go well with Saravanan telling using some unparliamentary words. The contestants jump in to solve the issue, Cheran leaves the place whereas Saravanan keeps telling that he looks like Vijaykanth and so he didn’t have to do much.

We then see Losliya and Cheran talking about the issue, Losliya says what Saravanan did was wrong. Cheran says he expects respect.

On the other hand, the contestants discuss the issue with Saravanan while Kavin and Sandy support Saravanan, says he was being targeted whereas Tharshan says that was just his opinion.

Then Bigg Boss asks Tharshan to pick someone and finally, he picks Losliya and Sherin. The argument between Saravanan and Cheran is still the hot topic with the contestants discussing it. We see Kavin and Sandy once again support Saravanan while they are talking whereas Sherin says nobody is looking at the big picture.

Sandy advises Kavin then after he sees Kavin talking with Losliya, asks him not to get into trouble again.

We then see Madhumitha crying while talking to Saravanan. She says she is hurt because of this fight and she doesn’t want two of the elders whom they all look up to fighting. Saravanan then makes fun of Madhumitha that lightens the situation. He reveals that in 1999, Cheran ignored Saravanan and didn’t allow him by telling that Saravanan had worked with top directors. Also, Saravanan says that Cheran behaves like a director inside the house also.

We see Cheran talking to the camera telling that he is hurt by the words Saravanan used and hopes that Saravanan would realise it someday. On the other hand, Sherin and Losliya are being sent to jail.

We see Mugen, Sandy, Kavin, Abhirami sings with lyrics making fun of the contestants. The song makes everyone laugh. Then we see Losliya crying hard to Abhirami then Kavin advice Losliya to ask sorry to all the contestants for what happened yesterday.

Saravanan advises Kavin, says what he is doing is wrong because Sherin was there when Kavin spoke to Losliya.

The show then moves in picking up the captain. The three contestants who are shortlisted for the captaincy- Madhu, Mugen and Sandy- are given a task and the winner of the task would go on to lead.

A single skate with three pairs of sneakers fixed on it and all the three contestants would wear the sneaker and the competition is to stay there till the end. Sandy hurts Madhu and she falls and her nose starts bleeding but is in because she didn’t fall off the sneakers. Whereas, Sandy gives up for Madhu. There is intense competition between Mugen and Madhu. While a few contestants want Mugen to give up, a few did not like the pampering that Madhu receives. Sakshi says it’s a physical competition and it is going to be brutal. Madhu knows all these.

After the intense competition, Mugen wins it. Bigg Boss offers the key for the Frooty fridge. Mugen is asked by fellow contestants to share a Frooty with Madhu for the way she found. The day ends with Mugen picking up Frooty from the fridge.