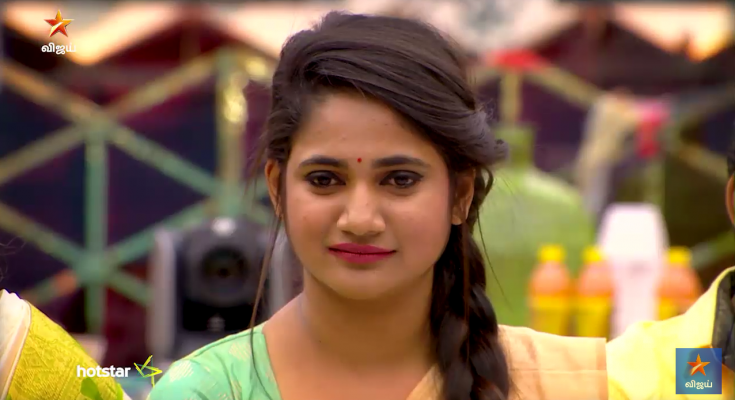 Abirami leaves the Bigg Boss house this weekend. Kamal deals with various issues that have been creeping its way into the minds of the contestants. Kamal asks Losliya and Cheran about their slight indifference in the recent times. Losliya speaks out what was bugging her mind this week. She is hurt when Cheran didn’t consider the daughterly love when he named her for worst performance, which might have made her to spend the time in jail. She is hurt when Cheran justified his answer when he didn’t choose her as a potential winner in the game. She knows that sort of expectation in a game is unfair but she still expects the love when she is involved in such relationship. Cheran also tells his mind that he is hurt that he didn’t get to spend time with Losliya as she has chosen to spend her time with her friends. He decided to give her the space she required. But he assures he will always be there when she needs her love. Kamal encourages Losliya as she has begun to participate more and credits it to Cheran’s motivation. Kamal tells the boys that they don’t have to discuss their opinions on the bathroom corridor which might inconvenient to others in the house. Vanitha is nick-named in the house as the matchstick by Kasthuri and the boys as she creates a spark in the house on sensitive issues. Vanitha wears the nick name as an armour and accepts it graciously. Since there is no captain in the house, Sherin, who got second place in the task after next to Madhumitha, is chosen as the captain of the house this weekend.

Kamal reveals that Kavin and Losliya are saved from eviction. It leaves Mugen and Abirami in the list. Between them, it is Abirami who leaves the house. She bids goodbye to her friends without any tears today. Sherin and Losliya break down at her departure. Abirami meets the audience and she is at her best. She meets her friends in the house one last time and wishes them well. She realizes that she hasn’t shown her best self in the house and she intends to show her talents more and more in her endeavours in the future. It is the best time for her to be out in the real world as Nerkonda Parvai running successfully and garners her wide appreciation. Cheran and Losliya break the new ice that has developed recently between them. Cheran’s moving words leave Losliya in tears. They begin to rejoin and try to mend the broken relationship between them. Losliya shares these moments with Kavin and he doesn’t seem to feel this emotions as it is. When Losliya asks Kavin about it later, he calls it drama what Cheran has been doing in the house. Kavin and Cheran, the two persons who are close to Losliya in the house, seem to be standing at opposite poles against each other. This seems to be an origin for another issue in the house in the coming weekends.