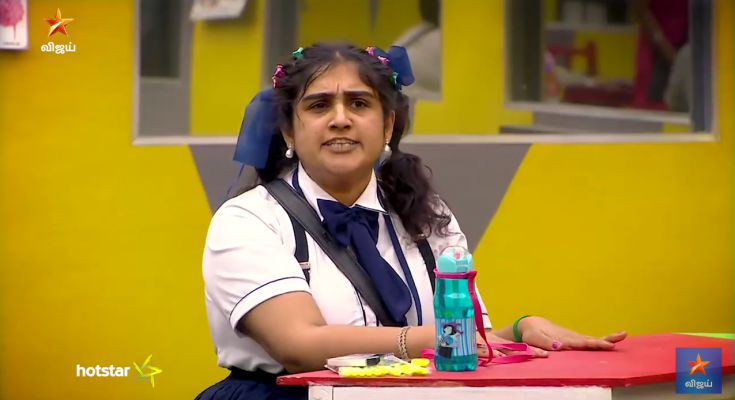 Vanitha and Kasthuri lock horns today over a misconceived issue. Today, the day begins with a melancholy song from Pandavar Bhoomi that once ruled the Tamil Cinema fans. It is close to Cheran’s heart as it is one of his finest movies. He remembers his old days and seem immersed in his memories. Luxury budget task for the week is that contestants have to play like the school kids’ role. Cheran is the headmaster and Kasthuri is the class teacher. She teaches them art and drawings in easy ways. She teaches them play on the field. Cheran teaches them exercises. Kasthuri teaches them rhymes. She teaches a rhyme about duck at does a subtle innuendo to imply Vanitha as duck. Vanitha seems a little offended but denies and present this issue that Kasthuri is being a wrong example of a teacher. Vanitha says it is wrong of her to mock the kids. Vanitha resists to cooperate in the task for few minutes and settles down not to change the course of the task. Sandy. as a school kid, steals the task. Losliya says Twinkle Twinkle rhyme in Tamil which is very refreshing.

After the task, Kasthuri wants to clarify with Vanitha that she didn’t mock her appearance. Vanitha stands strong on her point that she can’t any kind of mocking from a teacher to a student which she considers a wrong example to display in the task. All other housemates too think Kasthuri mocks Vanitha. Kasthuri later clarifies to the housemates as Sherin thought it was a mock at Vanitha’s appearance. Vanitha intrudes and asks reason for such establishment. Vanitha says she is a mother of 3 children and one of them is 18 years old. She is confident about her appearance and doesn’t sweat over those mocking. Kasthuri says she doesn’t do it as it is conveyed and tries to clarify that it wasn’t her intention. But as we know, she couldn’t win over the conversation with Vanitha.

Cheran and Sherin clears the cloud of confusion in today’s task for who didn’t perform well. They note down Vanitha and Kasthuri’s name to go to jail at the end of the week. He says it is wrong of Kasthuri to display such recklessness towards kids in a hurtful way and he registers it is wrong of Vanitha too to interrupt the task like that.

Later in the day, the housemates share their school days memories with others. Mugen shares how he was mocked for not being proficient in English language. Tharshan shares about his innocent looks and oily hairdo during his school days. He also shares the cold war between his class and his chemistry teacher. Kavin shares how he developed a love interest at the age of 10 and got caught to his teacher and later turned away from his love interest for involving the teacher in it. Sandy, the boisterous kid in his school days, shares the moments when he got caught to his teacher for faking his mother signatures. And he shares how he copied history paper for Accountancy exam. Sherin shares the days in her school when she looked so pretty and undaunted. She had a guy who fell head over heels for her. While she passed her exam with distinction, that boy failed. It is all end on a fun note. Cheran tells Tharshan before goes to bed that Losliya did a good job today as a school kid. While Tharshan adds Sherin too did good, Cheran denies that Sherin’s performance was a little over reacting.