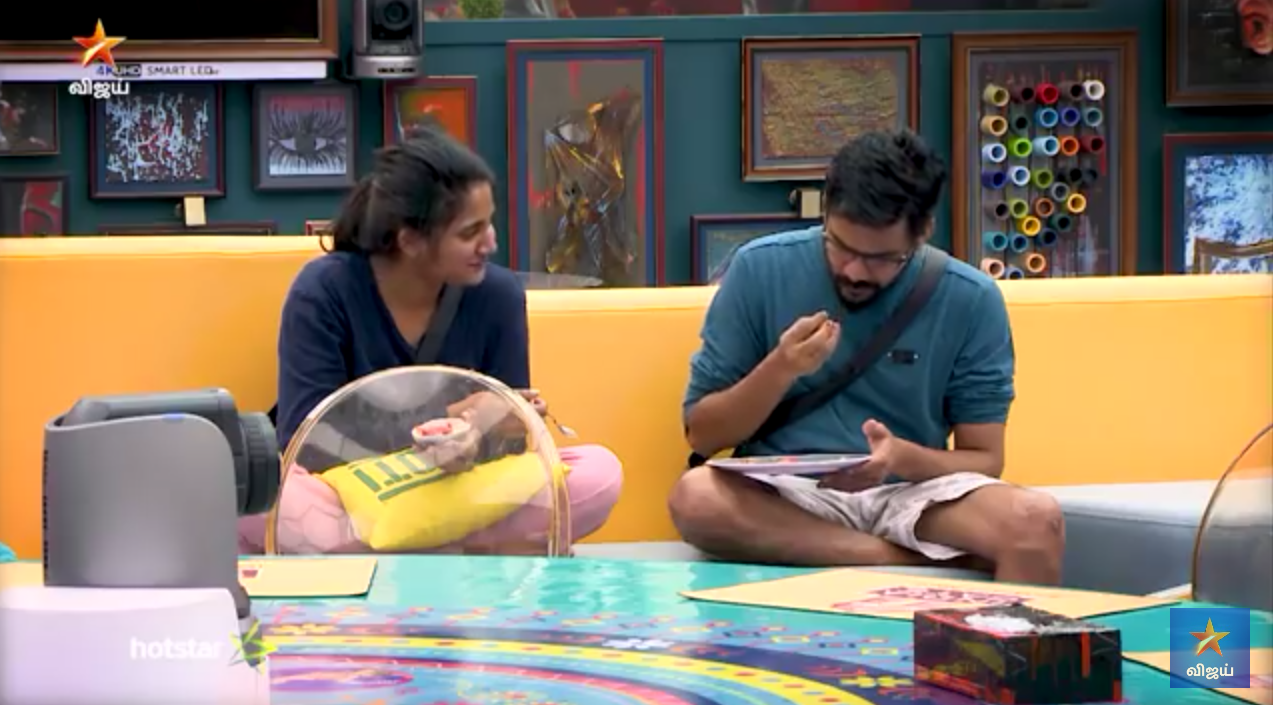 Bigg Boss season 3 has crossed 60 days and the character transformations we see from each contestants has arced to different maturity levels. The day begins with a bad joke from Kasthuri. She may call it a dumb joke but it is developed with a bad taste and becomes a insensitive one. She makes a joke about Sherin’s puppy dying in an accident and returns with many dogs only to bring the word play here “Empty Vessels make more “noise””. Sherin is upset and hurt and Vanitha supports Sherin’s feelings. Kasthuri says she didn’t intend to make Sherin upset and she is told by the housemates not to stir this matter more as she only ends up making it worse as always.

Cheran talks with Kavin about the issue that has been concerning him for few days in the house. He finally let it out that Kavin and Losliya have all the rights to spend their time together as they wish. But he concerns about how it has been portrayed to audience and their Parents. He is also sad as Losliya spends her most of the time with Kavin and not him, her fatherly figure in the house. Kavin understands it and tells Cheran it is not that Losliya doesn’t love Cheran and love more Kavin. She is just disappointed with Cheran in few matters and that’s preventing her to show her love to Cheran. Kavin assures that he will take care of their portrayal carefully. Cheran talks the same with Losliya. She says she likes Kavin and like him more nowadays as he has been standing with her rise and fall in the house. She admires and respects such character. She also understands what Cheran tries to say. She stands on her point of what she thinks right. She doesn’t care how it is being portrayed and how the world thinks of her. She will always be there for Kavin. Kavin and Losliya talks about their separate talks with Cheran and feels happy to find out what each other thinks of each other.

Best performers of the week is chosen. Cheran, Sandy and Losliya gets to compete for next week’s captaincy. Vanitha puts a strong point forward that she added value to the task by keeping it interesting by bringing different angles to the task. She thinks of her worthy of the best performer title. She also adds Cheran doesn’t fulfill his character in the task as the head master to address a kid’s problem. But the house votes for Cheran as a Majority. Vanitha tells Sherin that it is unfair to choose best performers for the sake of captaincy. Usually, the worst performers goes to jail but this week, Bigg Boss said nobody gets to go to jail and that relieved the contestants.

The boys play hide and seek in the house and hides in places where we don’t seem to think that they will fit. It keeps the episode fun for a while. The contestants are given a task to say only positive things about each other. The housemates get to register their points once again. It boosts the morale in the house a bit.

Tharshan and Losliya spend some time talking about the happenings in the house while Cheran happily watches it from a distance while doing his cleaning chores. He funnily asks them to join him too in their conversation. Tharshan says that Cheran has been really looking out for her with real concern. Cheran thinks he will be evicted this week from the house. Tharshan says Cheran wants someone to his job, motivating Losliya to win this game, in the house. He asks Tharshan of this favour after he is gone, he stills wants to see Losliya to have the spirit to win this game.