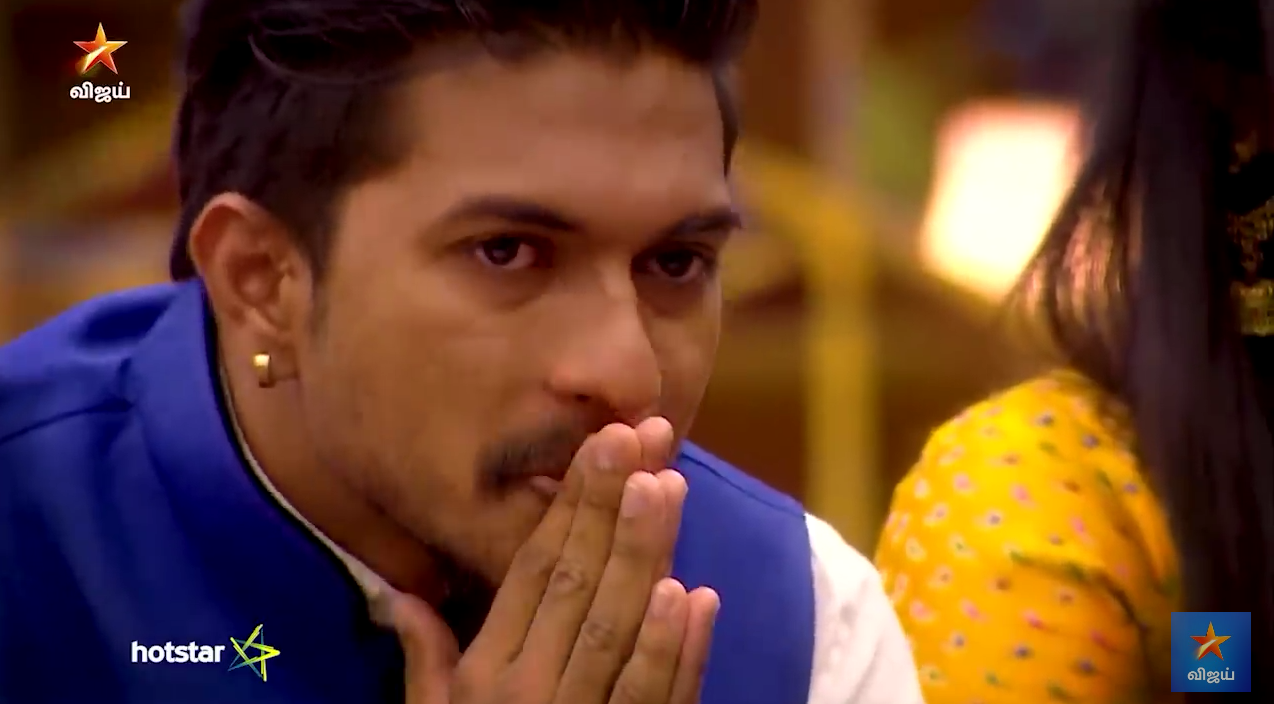 One of the most moving episodes of Bigg Boss season 3 is witnessed today. As we see the contestants get lost on their towards victory due to the emotional hurdles in the path, Kamal decides to instill the game spirit into the each individuals to get them on the track back. Kamal begins with individual pep talk with Sandy inside the confession room. Kamal mentions that this game is to unearth the individuality of each person and the winning title can’t be shared in friendship. Kamal tells Sandy to keep it in his mind that this game is for one self. Kamal talks with Kavin and tells him to show his individual capacity on the screen and not just confined himself to the red door in the house. Kamal concerns that Kavin’s identity should not only be that. When Kamal talks to Losliya, he tells her to concentrate on the game with the mindset she had when she, first, entered the house without knowing anyone in the house. This new blooming of emotions are rare and have to be cherished in life but this is a play field and she must battle to let only her best out, Kamal says. Losliya is confused as she doesn’t know what she does is right or wrong, she doesn’t know what she experiences, is real or not. She, now, decides to play the game without letting her emotions control her. Kamal talks with Sherin and praises her fairness in the house and gentleness towards others. He wishes her best to keep the spirit until the end and remember the applause of the audiences whenever she feels she is about to lose the track of the game. Kamal tells Cheran that he is one of the contestants who has learnt the angle of the games and skillfully plays it and shows his individuality. Kamal wishes him to go forward until the very end of the game. Cheran feels refreshing and energized by this tonic talk and expose his new confidence on the sleeve. Kamal tells Vanitha that she has got a fortunate chance to enter the game once again and not just to spice up the things in the house. Vanitha says it is her who she is and she is indeed putting on her best. Kamal tells Tharshan that his outspoken attitude which showed up in the beginning of the game doesn’t surface in the recent times. Kamal tells him to have his own voice and savour his impartiality. Kamal tells Kasthuri that she is not inside the Bigg Boss house how the audiences expected her to be. She is not sharp instead she fumbles and mess things up. Kamal wishes her well. Kamal talks to Mugen as listens to him to say how he genuinely wish Tharshan should win the title. This clarity of selfless thought is not explicitly captured in the house. Kamal lets him know that this is what the audience wishes to see from him too.

Earlier this week, the contestants talk about their favourite teachers in their lives. Today, the Bigg Boss team manages to find the teachers and secured a record message from them. This leaves the contestants in happy tears. They couldn’t help themselves not to well up. Sandy’s dance guru Kala leaves a message for Sandy and all other contestants and wish them well to play the game. Losliya gets to hear her tutor Prakash from Srilanka. She gets to hear how her people from her place are so full of pride to see her reach great heights. Kavin gets to hear his Tamil teacher Poongothai speak and it leaves him with heavy heart. Mugen listens to his teacher Ganeshwari and in tears without any words to say. His teacher’s message just reflects how exactly we see Mugen in the house, as person who longs for love in every possible relationship. Sherin and Tharshan get to hear from their teachers and leave them in surprise to hear them after a decade in their lives. Vanitha’s Guru P. Vasu couldn’t be reached and Kamal assures that he always has her best interests in his heart. We listen to K.S. Ravikumar talk to Cheran and we could see the gratefulness on his face. Ravi wishes Cheran well and name each one of the contestants in the house and wishes them well too. His message has brought a full circle to this entire event. Kasthuri, who said her daughter’s existential crisis made her realize what life has in store for her beyond silly reason to get down in life, listens to her children’s voice and has an emotional breakdown. She feels has to literally leave the house right away and hug her kids as long as she wants. The contestants are emotionally moved by their teachers’ messages and begin to have a new spirit to face the game. Just as they begin, Kamal talks about the knot, the eviction. Kamal saves Tharshan and Sandy which is anticipated as they have created a fan base outside. Cheran shows a commendable confidence that he will not leave the game that easily and that creates an uproar among the audiences. His game spirit is infectious which garners the love and support he wants to stay in the game. Kasthuri almost knows the result and we know too. Kasthuri leaves the house. She hasn’t made many friends in the 17 days into the house. So we don’t see many heartbroken faces in the game. They bid her goodbye with smiling faces and Kasthuri does the same too. She is almost in a hurry to get out of the house and reach out to her kids.

Kamal and Kasthuri joins the stage and talks about if it is her real self in the house as it didn’t seem to fulfill audiences’ expectations. Kasthuri tells that it is her real self and she won’t preach her advice where it is not valued too. Kamal offers her the choice to opt the secret room but Kasthuri denies it as her kids’ memories have occupied her mind. She tells Secret room and another entry will not change herself and it is going to be the same as she almost knows what others think of her. Kasthuri walks out of the stage after seeing a sweet memories of 17 days and talks with the housemates from the stage. Losliya seems relieved as Cheran doesn’t get to leave the house due to her last week’s nomination. Kamal bids goodbye to the contestants and tells the audience that there is not going to be any eviction next week which the contestants are not aware of. Let’s see what other chaos this will bring to the house.