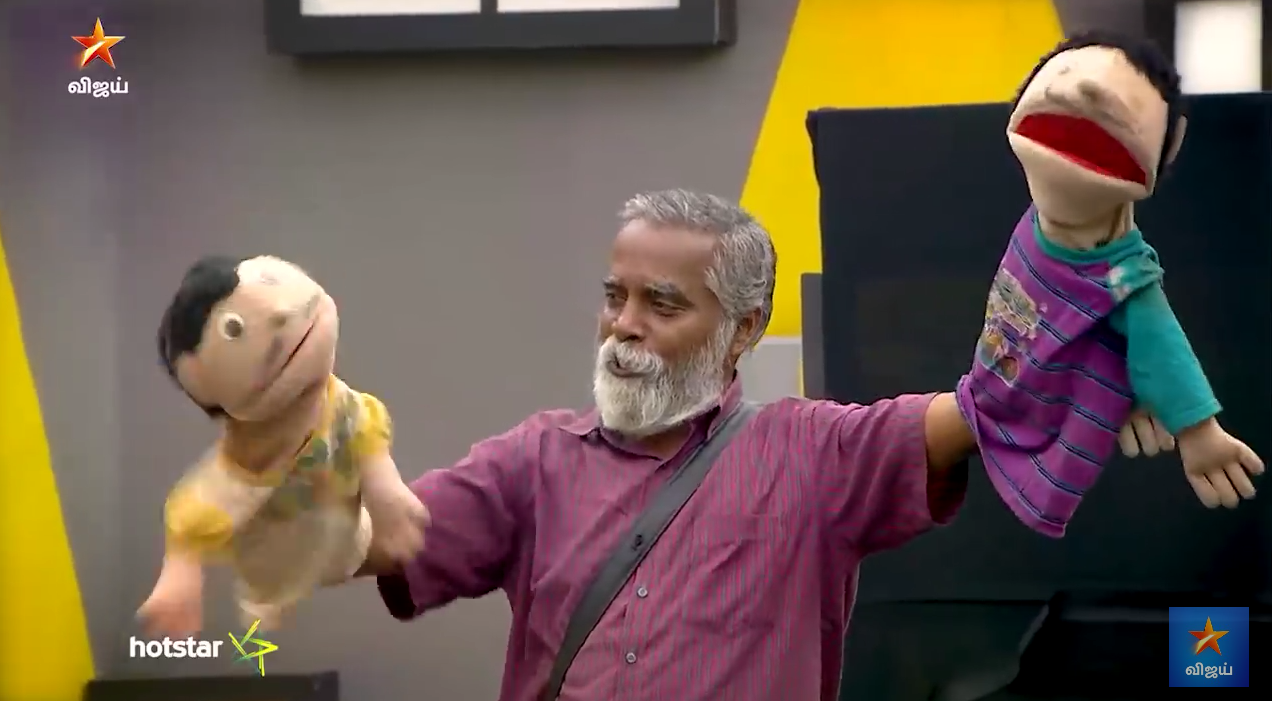 It is one of the funniest Bigg Boss Season 3 episodes. We see each of the contestants have risen to the occasion and voicing their opinions as 65+ days have been crossed in the show. We see the task continue from yesterday’s episode where Losliya, Vanitha and Cheran get to justify the reason to be the winner of the show and they stand the firing questions that are directed at them. We see the contestants turn themselves into a fun-proficient ventriloquists in today’s episodes.

Losliya gets to justify why she could be the winner of the show because she is able to decision making for herself without anybody’s influences and treading this journey on her own with nothing but her thing for conviction. Cheran asks her that she has been not outspoken about her conflict with her close friends and she decides without being willing to listen to the other side of the conflict. He asks how she could prove herself as a potential winner when she doesn’t have a clarity in dealing with sensitive issues. She accepts that she is emotionally weak person and acts sensitive by putting ahead her feeling in the game when she shouldn’t do so. She learns now that she shouldn’t do so and believes that she will give her strong self out henceforth in the game. Cheran says that he represents a simple man from each family who watches this show. He doesn’t play it safely and he tells he has been putting forth his opinions bravely when it is needed and handled issues with a certain conviction how he feels it right to solve them. Kavin, Tharshan and Losliya ask him why he remained silent when Madhu accused all the men in the house. Cheran says it would have been useless even if he talked as Madhumitha was in no position to listen. He also registered that he told her what she did that wasn’t right when she was able to listen. Cheran also felt hurt that Kavin, Tharshan and Sandy never included him one of them and he felt neglected. He doesn’t want to be pretentious to gain their love. He decides to be himself and yet he expressed his hurt. Vanitha tells that she is playing the game by being in it 100% and she doesn’t get distracted like others. She feels that even if her actions could have hurt anyone, she would apologise only if the person deserves it. As a single mother, she is playing in a field that is out of her comfort zone and she feels she would inspire the other women out there, who are just like her, to take a leap in in life.

Bigg Boss invites one of the famous ventriloquist in Tamil Nadu to let the contestants and the audiences to revive the dying art in our state. The contestants are shown the tricks to play with the dolls and they have to put on a show to express what they have learnt from the Mastero. Cheran is awe struck at the ingenious methods and struggles that are involved in the art. The contestants feel blessed to have had the opportunity to display the art.

After their short lesson, the contestants divide into 2 teams, as 2 villages. We do see few flirtations between Kavin and Losliya as they are into their characters. They get to live in huts outside the Bigg Boss house. They share a water well. They spend less amount of water to indicate the water shortage in our country, through their actions, through the art show too. We get to see the contestants play with glove puppets and Muppets using their fingers.

They put on a show to display what they have learnt. As 2 teams, Sandy, Mugen, Losliya and Vanitha are a team, they act on the topic Joint family. Vanitha and Sandy are fun to listen to (as we only listen to their voices and see the dolls that stick to their fingers). Losliya pulls some laugh too. Mugen covers the technicality aspects in a show and gives it a complete picture. It impresses every one of them.

Cheran, Kavin, Sherin and Tharshan are a team. They choose a topic of Abolishing Alcohol. Cheran, as a drunk father, spot on with his voice modulations. Tharshan, as an abused wife, doesn’t transfer the pain rather his attempt seems fun. Kavin, their son who loses concentration in his studies, cries and almost manages to gain sympathy. Sherin, as his teacher, responsibly tackles the hurt student from his father’s abuse and speaks for his to his father (Cheran) to give up his habit and advises him to come out of the addiction. This show, while registering a valuable lesson, leaves the winning title to the domestic comedy, Joint family show. The ventriloquist watches their performances without their knowledge and surprises the contestants with his appreciation. Vanitha gets to compete ij the next week captaincy as she directed questions without any reservation and impartiality. We see this task with village set up continues tomorrow too and they contestants will learn about something new about another art. We get to see their talents in the comings days.

I don’t want to comment on anyone and spoil their chances: Vanitha