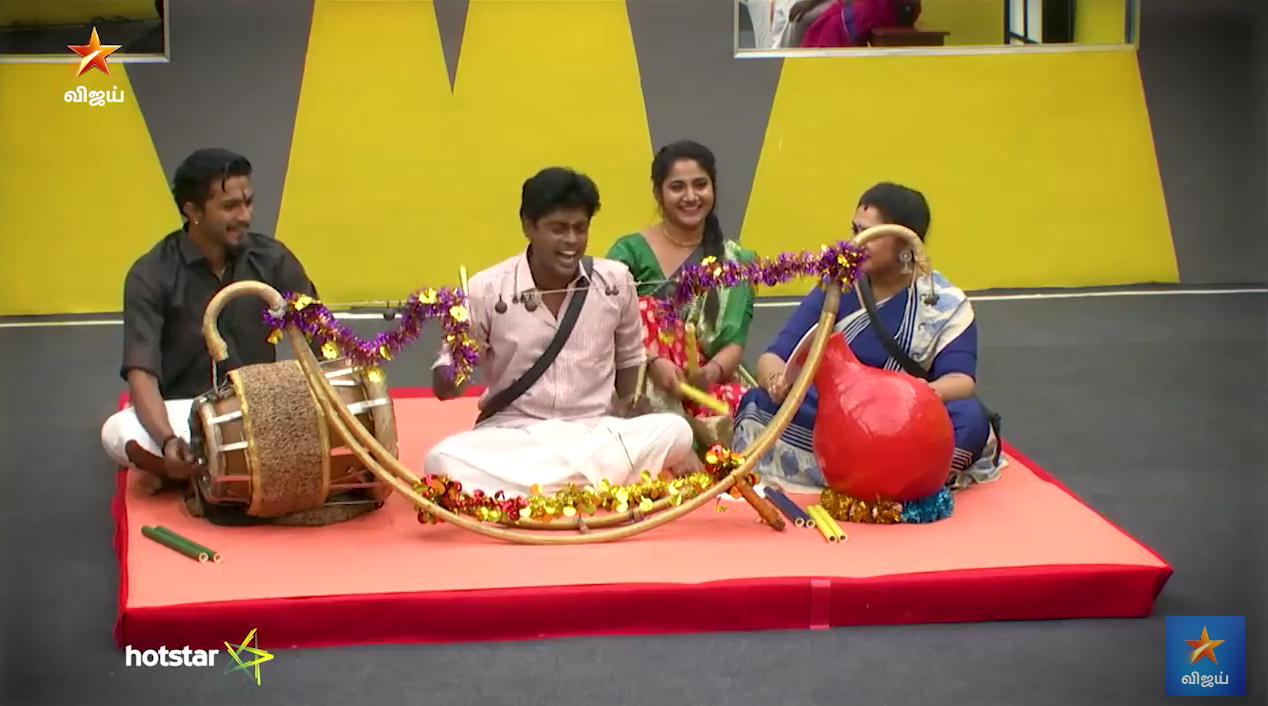 The day begins with a peppy Yuvan’s song and Sandy, Tharshan, Mugen and Losliya dance with a spirit as soon as they get out of beds. Kavin and Losliya talk about what is in store for them outside the Bigg Boss house. Kavin thinks about how they both will accommodate their time for dating and other stuff. Losliya says that they both are available to each other inside the house, which she means they both have nothing else to do other than spending with each other. The talk about dating seems far fetched to Losliya. Kavin assumes and says that she would not have time for him outside the house and he says he has already expressed everything he wants to tell her. He also thinks he would be evicted this weekend and Losliya says he wouldn’t be.

The contestants meet the veteran Kaleeshwaran, who taught them Ventriloquist tricks and Street show techniques, to learn about Villuppaatu today. Kaleeshwaran and his team do a demo to the contestants and they grasp it quickly with a practical experiment in front of the veteran before their actual tasks. Sandy keeps it fun and tells the tale of Bigg Boss season 3 through his Villuppaattu. In that, he also says Sherin tries to woo Tharshan for which Sherin is slightly offended.

The contestants do the actual task. Cheran and team take the topic of how bribery ruins a family’s peace and happiness. Sandy and team take the topic of how a child loses its love from the parents when they are divorced. Even when it seems Sandy has put all the efforts while others’ seem less effort comparitively, which also benefits the team. While Cheran is not proficient in singing and his team’s strength also don’t lie in singing, their effort seems imperfect, without a closure. So, Sandy and team win the task. Kaleeshwaran bids goodbye to the contestants and the show with a note from Bigg Boss to laud his efforts to revive the art in our state. They all wish him to continue his efforts and take this art to great heights as that is the only thing that is immortal.

Vanitha wishes her father, Vijayakumar for his birthday. She tells to the camera that she had had anger towards him but she never hated him. She wishes to get the love she longs once she is able to see him again. Cheran clarifies to his team of 4 and Sandy that singing is not his great strength and his team is not also supportive. The contestants choose the best performers of all the tasks. They choose Mugen, Vanitha and Cheran. Now they choose the worst performers. They hesitate and Kavin says that since he cant self nominate him, he chooses Tharshan and Sherin. Vanitha strongly objects his opinion and tells Sherin does her best and says it is her opinion. Vanitha tries to tune down Losliya as she doesn’t want her to go to jail again. After all the discussion, they choose Tharshan and Kavin. Vanitha says if they have to go to jail, they would protest against it. When Bigg Boss announces that there is no punishment for the worst performers this week. They all are happy. The day ends with Kavin and Sandy silently exchanges Sandy’s pain in missing his daughter. One more day is there to reach this weekend before the contestants meet Kamal. Luxury tasks end with today. Let’s see how their Friday goes.