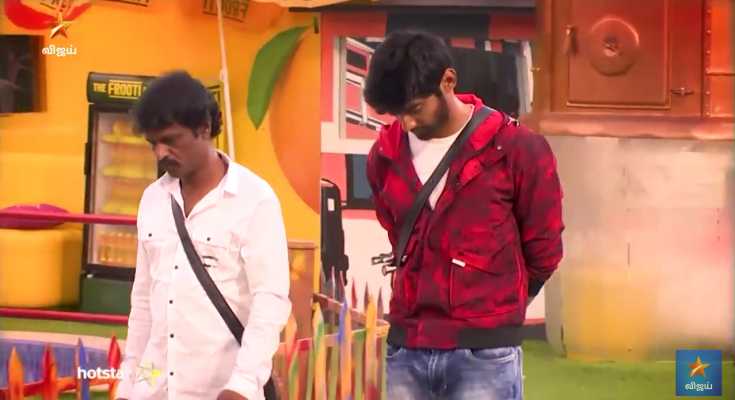 It’s an eviction free episode in the Bigg Boss season 3 this weekend. Today, it’s Cheran and Losliya are the people who goes through an emotional turmoil due to unreciprocated emotions between them. Kamal begins the day with his admiration towards the women who won the gold for India in front of the world stage in the recent times.

Bigg Boss caller of the week poses a question towards Losliya that why she didn’t oppose Kavin’s opinion when he called Cheran’s love as a dramatic expression. Losliya says that she is in a confused state where she couldn’t distinguish between true and fake love. It seems she is on the same page with Kavin. She says that sometimes Cheran says he waits for her to eat together and sometimes he eats by himself. When it comes to the tasks, she thinks Cheran never wishes to let her win while she never wants to defeat him. She had told this before that she knew such expectations are unfair in the game but she really accuses Cheran of fake love, for not sacrificing his attentions and urge to win the game. Cheran is deeply hurt by this as his unconditioned love is questioned like this in front of everybody.

Kamal leaves a short break and asks the contestants to prepare a Bigg Boss story based on the same hints that have been given to them in cue cards. All of them weave a story with those words except Cheran who is too hurt to weave a story. The storyteller in him is hurt to come out. Kamal feels his pain and tells him not to take it hard on himself as his experience in life is not same as Losliya. And he tells Losliya not to accuse him for silly reasons. Vanitha is there to give Cheran the moral support he needs at the time. She tries to make him see the truth that being the father and fatherly figure is different. He can’t take advantage of that relationship anymore as the Losliya is not willing to hear him out. Kamal tells Losliya to support herself and hold her hands together for any support, she thinks, she needs in the house. The audiences from the set ask questions to most of the contestants that really hit them hard. It mostly hit Vanitha, Losliya as their self portrayal is not what they expected to be. They just seem too tired to explain themselves to the audiences and care too much about the people who surround them at that moment. The contestants begin to think that they have a real life out of the house and these emotional disturbances are just momentary.

Kamal talks about the eviction and elevate the dormant tension among the contestants. He reveals one by one as who got saved and says at the end that there is no eviction through his signature short film (Kurum padam). The contestants don’t seem happy or relieved. Kavin is emotionally down as it is portrayed that Losliya’s decisions are due to his influences. Most of the housemates shares the same thought. Kavin and Losliya differs from it and she says her decisions are her own and she wasn’t influenced by anyone. Kavin is ready to get married to Losliya in an instant. He has started to wire the idea of asking her hand for marriage to her parents and other stuffs. He says all these things to Sherin and she too thinks that this is all in a rush. Losliya doesn’t seem to share the same impulse as Kavin. She just wants to wait and see how this is gonna go outside the house. Kavin seems in a hurry and usually it would always end with a heartbreak. As Losliya and Kavin decided yesterday, they stopped spending and talking too much to each other. And in this heavy moment, they choose to stay apart and it is hard on both of them as they couldn’t console each other. Losliya keeps saying that she is in a confused state and accuse Cheran of silly reasons like a Child. But she is very clear when it comes to Kavin getting a bad reputation for involving himself with her. She said to Kamal that she would clear the things with Cheran but she doesn’t make any effort today. May be she will. We will know in the coming days.

Cheran starts to distance himself as his love is not valued. Last week, Cheran came forward himself to clear things out with Losliya. As it is not of any use, he decides to resort to himself and the people who listens to him. Vanitha is the new buddy to him in the house now. Vanitha gives sound advice to Sherin too as she trusts everyone in the house which she shouldn’t. Cheran – Losliya relationship is with a wide crack now and it doesn’t seem to be cemented any soon. Kavin has to get his train of thoughts under control. They seem to be entering a depression mode and gives a grim mood in the house. Let’s see how this week is gonna go. 30 days to go with 8 contestants.