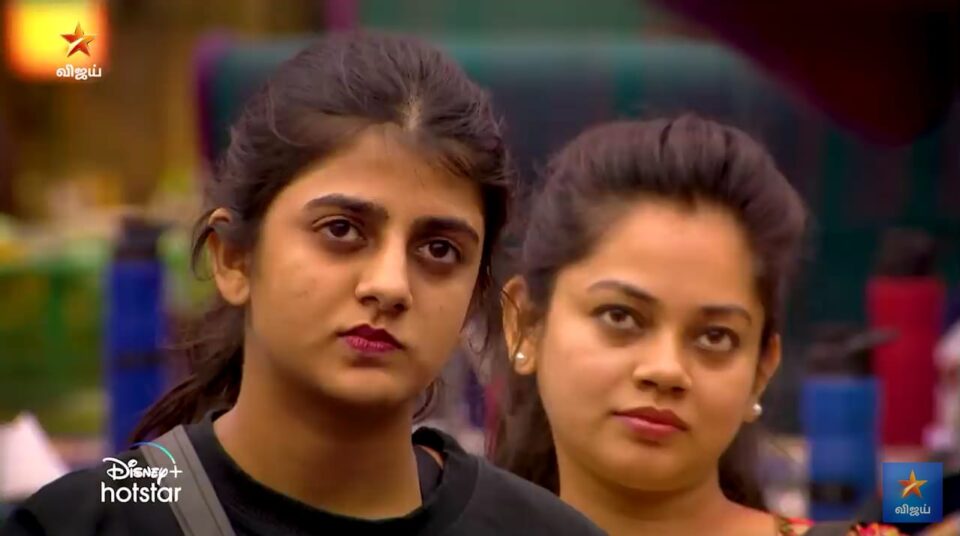 After Aajeedh wins the Eviction Pass from an interesting game yesterday, there were a lot of commotion about how Suresh plays mind games with an intent to create animosity between the housemates. He mentioned some of the housemates form a group together and maintain a distance from him. He says he felt cornered by Rio and some others in the house.

Rio opens up a dialogue with him about the way Suresh feels in order to assure him there is no such thing as a group inside the house to ostracise a particular person. Suresh and Rio talk it out. And most of the housemates are still in an amazement at Suresh’s surreal mind games.

Gabriella and Aajeedh are named to dance first for the reverberating dance number Rowdy baby. They danced cutely together. Next, Rio and Nisha dance for a retro number. They don’t fail to invoke some big laughs through their comical dance performances. After the dance is over, they are still in costumes and try to make people laugh.

Sanam and Velmurugan dance for a 80s techno song. Velmurugan is energetic and Sanam is voluptuous in her eye-catching dance performance.

And the dance of the day is Anitha and Suresh. They dance for the famous Prabhu Deva number from Charlie Chaplin 2. Anitha is cute, arresting and charming with her fun dance. Anitha has already amazed the audience with her amazing speech talent this week which won her Miss. Talented title. And today, we witness her stunning dance performance too. She keeps surprising.

Bigg Boss gives another task to the participants to save themselves and the partner of their choice from next week’s eviction. Suresh and Bala, Anitha and Gaby, Aajeedh and Ramya, Som and Samyuktha, Shivani and Aari, Jithan Ramesh and Rekha, Rio and Nisha, Sanam and Velmurugan are the partners.

When Gaby dropped the ball into the bowl, she names Suresh to go out. As she is paired with Anitha and she has personally some dispute with Suresh’s mind games from yesterday’s Eviction Pass task, it seemed obvious to everyone. They think she is getting personal outside of the game.

At last, Sanam and Velmurugan remained in the circle till the last and won the game. They both as partners are saved from next week’s eviction nomination.

After the game, they are in groups discuss about the going ons. Suresh discusses and says to Samyuktha, Ramya and Shivani about how Gaby went personal. And the how the underdogs, Sanam and Vel, won the game when nobody thought of excluding them from circle. Housemates are gradually overlapping the game and the bond in the house and start to get personal even in the spirit of the game.