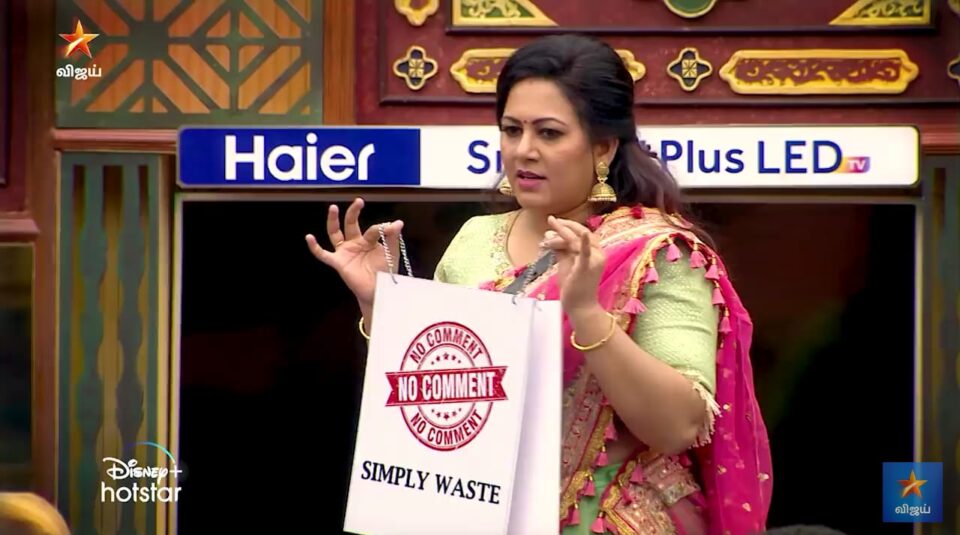 After a series of interesting events from Eviction Pass task and Dance Round, things got a bit slow today. Aajeedh tries his best to hide the Eviction Pass he won. There is only a slight friction between Vel, Rio and Suresh, Sanam and Bala. We get to see Jithan Ramesh and Rekha dance to a number from the film Jithan itself. Shivani and Bala decorate the dance stage together. Aari and Ramya set the floor ablaze from their part too. Ramya is charming as always. Som and Samyuktha do a melodious duet from Minsara Kanavu, Vennilave Vennilave. They were cute. Suresh and his team take care of their cooking responsibilities that meets everyone’s needs.

To spice up and to give things a strong nudge, Archana, TV anchor, enters the house as the 17th contestant today. She is funny, charming and smashing. Archana give a piece to everyone who look forwards to hear what the audience think of them, especially Anitha. She badly doesn’t want to end up on the bad note with viewers. When Anitha kept reiterating this constant worry of her, it only puts off people from watching the ongoings. Same goes with many contestants in the house and today it is Nisha. They try really hard to make the show interesting as well as to find a balance not to hurt each other. They fail to make it interesting enough to stick with them. They are either literally starving for problems causes or too innocent to let them go unnoticed. They don’t make a scene. They only try to smooth things and try to invoke sympathy. Their true-selfs are yet to come out.

Suresh is one of the most interesting candidates in the mix. He surely sometimes make the show interesting but he doesn’t have a strong opposing sides to create a balance and elevate his efforts. Archana enters the house and give the 16 participants each a title that suits their state inside the house for the part 11 days. She give the titles which matches the audiences view such as given below:

Ramya – Rio : Most challenging Participants.
Nisha – Jithan Ramesh : Yes people ( who says Yes to avoid problems)
Aari – Sanam : Wasted firecrackers
Aajeedh – Gabriella : Missing (as they are no where to be found in the house during most of the times)
Shivani – Velmurugan : Atmosphere set pieces
Samyuktha – Som : Showcase mannequins (who doesn’t act other than being a showcase dolls)
Bala – Rekha : No comments, Simply waste
Suresh – Anitha : Bigg Boss 4 Trending
After a bit of soul searching, contestants try to create contents to shine out of the show. Bala finds the Eviction Pass that Aajeedh hid in the house. He says to the camera that he is only doing it to make Aajeedh learn how to keep his thing safe. He let Aajeedh and other wonder for few mins where the pass has gone but then he revealed he only took it. And then, everyone finds an excuse to take the pass back from Aajeedh. Aajeedh, being careful, doesn’t give the pass to anyone even if it’s for just to glance it. Jithan Ramesh took it from his hand when Aajeedh was a bit distracted. It is passed on to Aari and then Nisha asks the pass to have a look at it.

Nisha sees the tension shadowing on Aajeedh’s face, thought she wanted it to stop. So, she asked the pass to have a look at and then gave it to Aajeedh to keep him calm. Aari got offended by Nisha’s such act as it means she indirectly means that Aari doesn’t think in favor of Aajeedh and may try to keep the pass to himself. Aari felt bad when both Nisha and Aajeedh lost the trust in him as he only tries to mentor Aajeedh since the Day 1. It hurt him a bit. But it hurt even more Nisha as she says she is only trying to play along and gave the pass back to Aajeedh. She says repeatedly that she doesn’t mean to do to hurt anyone but only to play along. This gets repetitive after a point and we lose interest in it.

I don’t want to get involved in Kavin-Losliya’s relationship: Cheran