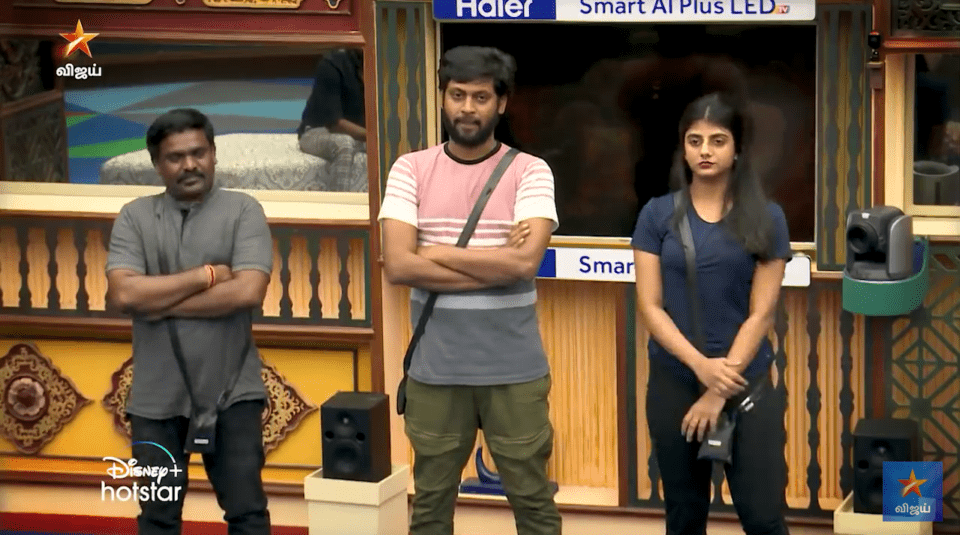 Archana, as the newcomer to the house, host the voting part of the end of dance round. Everyone unanimously vote Gabriella and Velmurugan as best performers. When they are asked who involved in the house affairs completely through out the week, Rio is voted. When they are asked which two didn’t involve much in the house affairs, Shivani and Jithan Ramesh are voted. They two are asked to be locked inside the resting glass door room outside the house.

As the voting finishes, Anitha and Som get into a quarrel for Anitha didn’t vote Som for his dance performance. Anitha says she couldn’t just vote him because he is her friend. She says friendship doesn’t involve in nominations. When Anitha says that Som took it personally to his heart for not supporting him and says she raised her other hand which wasn’t visible to him from a certain angle. Som then accused her lightly that she kept changing her statements which hurt Anitha greatly. She kept repeating that it is wrong of Som to accuse her like that when she only stated her fact. They both talk it out and smooth things out.

From the voting result, Gabriella, Velmurugan and Rio are chosen for next week’s captaincy. The rest of the contestants are asked to vote for the captains of their choice. Rio is supported by Bala, Aajeedh, Nisha, Anitha and Ramya. Velmurugan is supported by Sanam, Rekha, Aari, Samyuktha. Gabriella is supported only by Suresh for the captaincy. Finally, Rekha forgetfully removes her had from Velmurugan a second and they are disqualified from the game. Rio wins and is going to be the next captain. Shivani and Ramesh are released from their resting roon.

Bigg Boss gives a task to lift their choice of candidates on their back and rest of the supporters should surround and touch their candidates. Only Suresh is there to lift Gaby. Gaby is very reluctant to do this as Suresh already has a back problem. Suresh insists that he does it as it’s part of the game and if it hurts, he says, he would surely stops doing that. He carried Gaby as piggybacking for a considerable amount of time until Gaby couldn’t hold tightly to Suresh as her legs start to hurt. Gaby is so emotional that only Suresh supported her captaincy. She is furious Bala and Aajeedh who she thought her best friends didn’t think she is capable of being a captain. Gaby feels she wasn’t supported even by her friends.

Suresh is a good sport. He participated in the task even when nobody takes care of him. He is that old man who we think they are fit to take care of themselves but deep down they also in need of human compassion. And when such compassion is shown to him by Archana, even the strong man, starts welling up emotionally. Archana applies ointment for his hand pain. Gaby feels bad that Suresh is hurt because he played the game for her. She feels dejected as she is thought of incapable of being a captain. And feels dejected when Bala uttered the word that she wouldn’t get it anyway. Today, Gaby shines when she rightfully shows her anger for asking what she wanted.