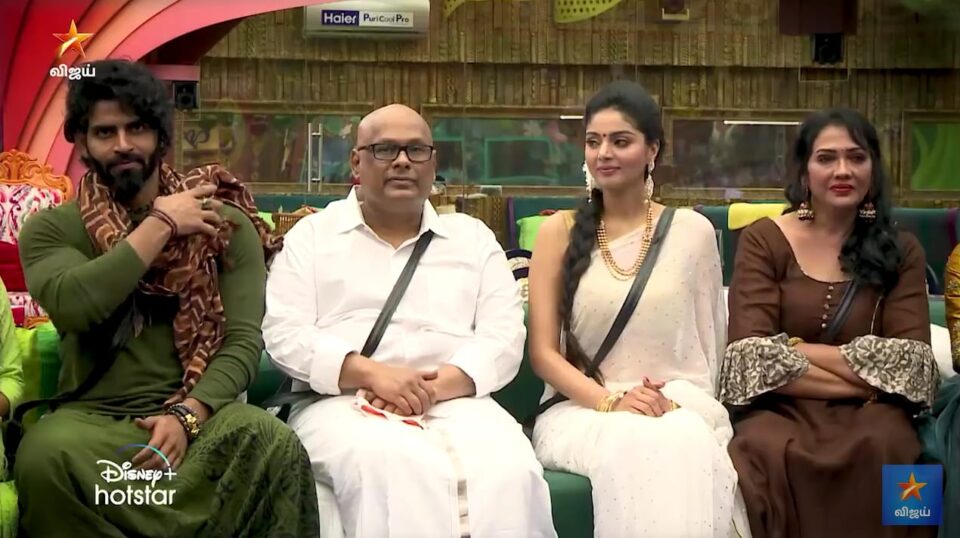 2nd weekend in the Bigg Boss Tamil season 4 is here. Kamal meets the contestants and discusses the issues that’s been pressing them since last week. As they are beginning to show their true skins, it lets the audience to do an assessment. We peek into the house to know what happened on Friday.

Bigg Boss sends the contestants fish to cook which got Rekha excited. She wants to cook and serve her favorite fish curry to the contestants. It began as a common discussion about how and when to cook it so that they don’t waste it, it ended up as a fight between Sanam and Bala. Bala tells Sanam not to intrude in any discussion which he is part of. Sanam got furious as it meant Bala interfered in her freedom to talk. Sanam demanded a clarification as why he would talk like that only to her and not anyone. Bala denies that he is being partial and says he would treat everyone equally. Bala says to Sanam that she is voluntarily creating problems as she wants attention. Sanam gives it back to him that everyone here wants attention and that’s why they are in this game. She walks away saying that she doesn’t want such attention like this. Bala tries to avoid any type of conversation with Sanam by all his strength as he doesn’t want to look bad to the audience but he comes off as rude.

Kamal gets into the problems one by one those are pressing them, he starts with the clash between Rio and Suresh when the latter tried to quote the former, Rio misinterpreted that Suresh was only to sketch him as bad tempered person. Kamal clarifies it and lets Rio know his mistake. But still Rio stands on his point as he had his reasons to get angry. Kamal touched upon the issue between Velmurugan and Suresh which involved the latter gifted Dhoti to Vel and he openly mentioned about it on his game. Vel was hurt by his remark as it would have to mean that he was in need of such help, which Suresh says not his intention at all. Kamal doesn’t really get into the issue and walk around to laud Suresh’s smartness and his gaming ability. Kamal and Suresh, both men, really didn’t want to accept that vel’s hurt. Witnessing this, Aari and Rio also feel helpless to comment on anything in it. Even Vel didn’t want to make it any bigger than it already is.

He dives into the titles offered to the contestants by Archana as soon as she walked into the house. Kamal tries offer a positive connotation on each of their caricatured titles to make them feel better. Bala and Aajeedh, Sanam and Anitha take away the advice Kamal offered them and ponder on them. All they want, at the end, is to have a positive reach with the audience.
Eviction of the week is addressed. Ramya, Aajeedh, Shivani, Samyuktha, Sanam, Rekha are lined up for this week’s eviction nomination. Kamal announces who all get saved this week. Ramya, Shivani and Aajeedh get saved. Rekha, the status of Samyuktha and Sanam aren’t revealed yet until tomorrow.

When Nisha says she is not used to clean pigeon vessels as she is used to clean mainly stainless steel vessels at home, Nisha suggests whether they can switch to stell vessels as she is in vessel washing team. Archana sharply replies that Nisha needn’t do the chore anymore and she would take care of it. She could have done it with some diplomacy but it seemed sharp and evidently hurt Nisha. While they prepare for the next day, We see Gaby and Archana try to connect with each other after multiple failed occasions. They both try to put their best foot in front but misinterpret themselves and stay disconnected. They have started to make an effort. We will know tomorrow that who will be leaving the Bigg Boss Tamil Season 4 as the first contestant.