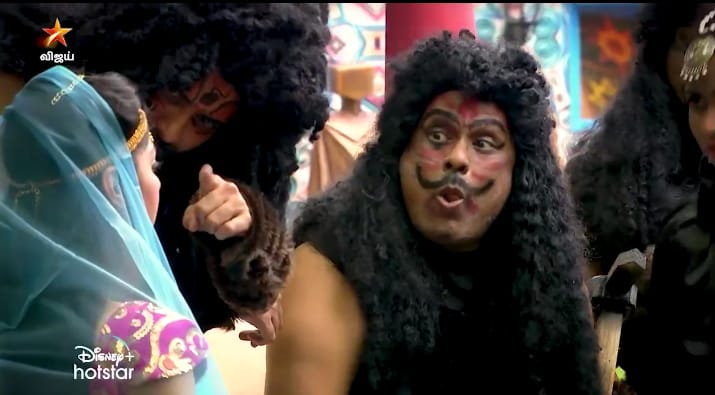 Luxury Task of this week makes it interesting today’s episode. As the day begins, Aari opens up a dialogue with Suresh about his remark about the former with Kamal last Sunday. Suresh said Aari was providing unsolicited advices which gave the others the idea to follow the same footsteps to give remark on Aari. It made Aari to think that Suresh voluntarily puts the ideas in the contestants’ minds which he himself had nothing to do with it. Suresh said he doesn’t remember what he said but he apologized for the same. When the store room buzzer went on, he walks away from the ongoing conversation with Aari without giving him a proper closure.

Luxury task of the week is, the housemates are divided into to teams, one is kingdom and another is a group of demons who try to take over the kingdom by making the other team their slaves. Suresh, Anitha, Archana, Aari, Shivani, Ramesh, Gaby and Aajeedh are the demons outside the main door. The rest 8, Nisha, Sanam, Rio, Samyuktha, Ramya, Balaji, Som, Vel are the kingdom people. Sanam volunteers on behalf of their team for the Suresh’s team to make her move or laugh or cry or do anything other than sitting still and make her their slave. Suresh speaks ill of her and tries to invoke the personal vengeance with her. But Sanam stays strong against all the ill-remarks and succeeds her part. After he walks back into the house, the demon team, talks how each of them has one or two issues with Sanam. They say Sanam doesn’t make any effort to create a bond and they say she is not just a strong person to withstand all these ill-remarks. They say she is completely something else, like a stone-hearted.

From the Kingdom team, for which Nisha is the queen, keeps it fun and engaging. And when we talk about fun and engaging, Suresh’s name has to be mentioned. He keeps it very real and engrossing. Som and Balaji from the Nisha’s team fail to win the game and moves during their task. They become the demons themselves and joins Suresh’s team. Rio and Samyuktha win it by staying strong. When they were trying to make Samyuktha move their their comedy remarks or ill-talks, Suresh mentions that Sam is sharing the bed with a snake, which he means Sanam. Anitha, there itself, tries to stop him from going behaving low like that. Even during breaks in the task, Suresh says Sanam is an idiot to give suggestion to the person of her team who cant hear her, who was showing his back to her, but Ramya did say Sanam kept encouraging the people. Sanam does the best she could.

Anitha tells Aari how Suresh takes a dig at Sanam in the game with Samyuktha. She says he plays dirty game and it’s evident. Anitha even mentioned it to Suresh then and there but Suresh only called her an idiot. Aari says that she shouldn’t have made him aware of his dirty tricks as he becomes careful about it now. He might now try to mask his true self.

Even in this game of theirs, they often use the terms like “Isn’t there anyone man enough to tackle us?” when they send Sanam as the first representative, they talk ill, “you send woman to play the game”. This kinda dirty talks irk it much.

The task is ended as the day is over and it will be continued in the coming days this week. As part of the luxury task, the essential rations to the housemates are reduced considerably. They set meters on Gas and Water usage. And cooking essentials will not be given further this week and they have to manage with what they have till Monday. Archana talks about how cutting down coffee/tea/milk is needed and rice and curd rations too. She loses it as lack of food is a state that doesn’t supposed to happen to anyone. She cries and people come together to console her and says they would reduce or give up their part of their ration. Let’s see how the housemates manage this deduction.